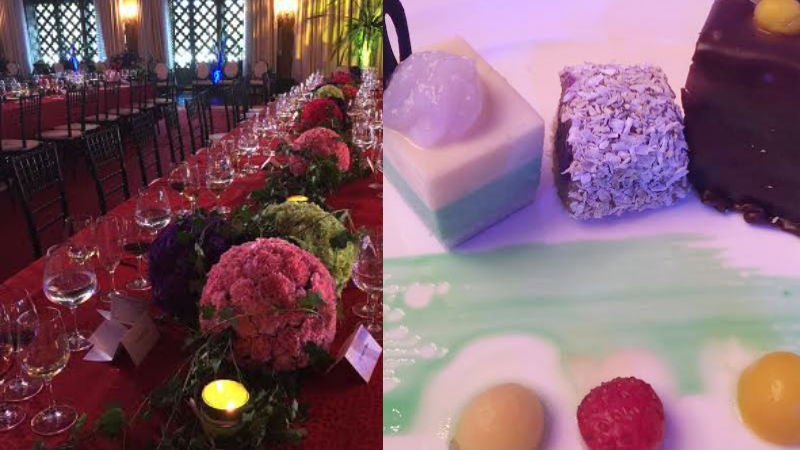 FOR CHILE President Michelle Bachelet, a woman leader who has led a most challenging life, Malacañang prepared a state luncheon Monday that was cheery, light and breezy.

Rose-pink gerberas lining the stairway leading to Malacañang’s Ceremonial Hall set the happy, even feminine, mood. Guests were asked to come in “formal business”—the men in formal barong or dark suit and the women in short dress. It was a day that didn’t call for serpentina trains or heavy ternos.

In his speech, President Aquino spoke of a shared goal with Chile: a democracy that is “inclusive,” which will benefit all.

In her speech, Bachelet noted how it is that Chile has the oldest ties in Southeast Asia with the Philippines.

While their heartfelt speeches brought out the common values and aspirations of the two countries, they didn’t bare the parallelisms in the personal lives of the two leaders.

Her father was an Air Force general who, having opposed the military coup that brought Pinochet to power, was imprisoned and tortured, and died under military custody in 1974.

Bachelet and her mother were also imprisoned. Upon their release in 1975, the family went to live in exile in Australia, then East Germany. In 1979, they returned to Chile, where she completed her medical degree.

President Aquino, with the rest of his family, spent a few years in exile with his father, opposition Sen. Benigno Aquino Jr., whose assassination later on would be the turning point in contemporary Philippine history.

Perhaps such similarities were enough to serve as ice-breakers at the presidential table. Mr. Aquino and Bachelet seemed to be comfortable and at ease with each other at the luncheon.

A medical doctor, Bachelet is said to be very popular in Chile, her accomplishments highly recognized. She served as defense minister and, in between her presidential terms, became head of the UN Women.

With Mr. Aquino at the table was his sister, Viel Aquino-Dee.

It was capped with a Filipino dessert sampler composed of purple yam “biko” roulade coated with coconut, mango-cashew chocolate gateaux, and macapuno-pandan mousse with pearl-like scoops of fresh fruits.

Before the dessert could be over, top-notch artists Vina Morales, Shiela Valderama, Cris Villonco, Aicelle Santos—veterans of theater and the concert scene—strode into the hall singing “Quando, Quando, Quando” with the Dance Royalties.

The latter is a group of dancers known in jazz, hip-hop, Broadway, ethnic and modern dance circles.

And then, “Michelle, ma belle…” crooned Noel Cabangon, Bo Cerrudo and Lorenz Martinez—the Paul McCartney classic that was obviously meant for the honoree. It started a string of Beatles classics.

Morales, Cabangon and the entire cast capped the brief performance with an OPM medley.

In hosting state functions and staging the Palace entertainment, the Aquino administration has tapped a wide range of Filipino talent, from theater to the concert scene—even in this, a democracy that’s “inclusive.”