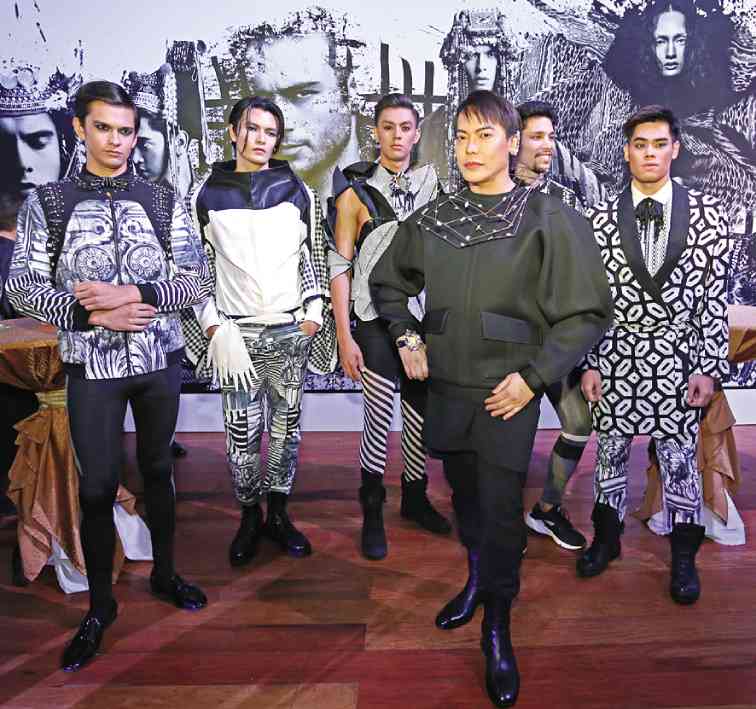 ONE CAN use a lot of adjectives to describe the works of accessories designer and event stylist Jun Jun Ablaza, but “minimalist” is certainly not one of them.

When it comes to his art, the friendly and soft-spoken Ablaza, creative director of Ablaze accessories, isn’t shy about his lush, maximalist ways that often border on the surreal.

In his book, more is more, and friends, including members of the diplomatic and business communities, again got to witness his brand of art, as Ablaza recently turned “28” with a birthday party-slash-exhibit at the Manila Polo Club dubbed “Precious Presents.”

Just like in years past, Ablaza’s annual birthday exhibit of photo collages featuring his favorite things—and there are plenty—required him to collaborate with an army of fashion designers, photographers, stylists, hair and makeup artists, graphic artists and 40 male models.

Apart from appearing in his giant photo collages that deck the walls of Manila Polo Club’s main hall, the bevy of models clad in outlandish black-and-white outfits by Steve de Leon, Rafael Gonzalez and Michele Sison trailed Ablaza everywhere he went as he greeted guests.

“I once read a book titled ‘The Precious Present’ by Spencer Johnson,” Ablaza, wearing black pants and neoprene top accessorized with a solar system-inspired neckpiece, shared. “The wisdom I gained after reading it gave me a deeper sense of happiness and fulfillment personally and professionally. This became the core inspiration of my work this year.”

The exhibit of photo collages was personal in many ways, as it reflected not only Ablaza’s brand of art, but also featured “combined objects” from his prized collection of beads, belts, coin pendants, religious pendants, earrings, necklaces, hats, rings, raincoats, silk ties and vests.

Filbert Kung, Mark Diaz and Ari Simangan shot the images. With the help of graphic artists Daryl Feril and Gino Avila, these myriad objects were reproduced countless times, and combined with prints and the chiseled visages of Ablaza’s models.

Ablaza and his collaborators had less than five months to work on the exhibit because he was busy earlier this year helping organize his parents’ golden wedding anniversary.

“Living in the present gives me tranquility,” said Ablaza, referring to the exhibit’s significance and his present state of mind. “After fully appreciating the many joys in my life, I’m able to achieve a clearer creative process without being bogged down by doubts about the future.”

Precious presents are also the “sundry and abundant blessings that resulted from my current state of happiness,” he added.

He derives a great deal of happiness from being surrounded by family, friends and “my unique creations.” They fuel him to further “create, share and dream.”

Parents Louie and Mellie Ablaza, and big sister Czarina Ablaza-Syquia and her husband Jofe Syquia, were also present to help him entertain guests.

“As a creative person, I continue to dream and imagine the myriad tablescapes, art wear and accessories that I plan to add to my thriving collection,” said Ablaza, who also runs a shop named Ablaze at Market! Market!

Ablaza, with support from Viking range and kitchen equipment, was able to raise funds that evening for an outreach program for the benefit of poor children undergoing chemotherapy at UP-PGH children’s cancer ward.

He also collaborated with Moet & Chandon, one of the event’s sponsors, to produce a golden installation in the middle of the exhibit venue.

Made of up human figures juxtaposed with countless champagne bottles and found objects, the upright artwork had all the hallmarks of the birthday celebrator’s design aesthetic: lavish, unapologetic and larger than life.