The watch as a patriotic statement | Lifestyle.INQ ❮ ❯ 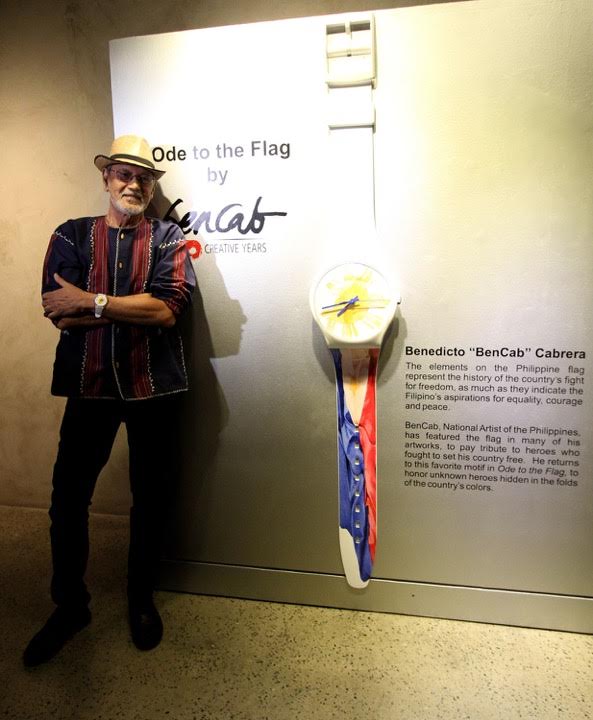 The watch as a patriotic statement

If you can wear your patriotism on your sleeve, why not show it on your wrist?

To celebrate its 25th year in the Philippines, Swatch recently launched National Artist for Visual Arts Benedicto “BenCab” Cabrera’s specially designed “Ode to the Flag” watch at the Swatch Center in Makati.

The predominantly white timepiece features part of the country’s tricolors on the right side of the strap and its golden sun on the white dial. BenCab rendered both flag and sun in his trademark “drapery” style.

It was Swatch’s second time to work with a prominent personality since Jaime Zobel designed a special watch for the Swiss brand to mark the centennial of Philippine independence in 1998.

Virgie Ramos, the woman who brought Swatch to the Philippines, discussed the collaboration with BenCab earlier this year “over napkin” at the Peninsula Manila.

They were having a nightcap at the hotel’s lobby after watching “Sabel,” a play inspired by BenCab’s homeless muse and the subject of many of his paintings.

“We were talking casually about it until Ben started drawing his ideas on a napkin,” said Ramos. “As trite as it was, it began that way until he came up with his version of the Philippine flag.”

BenCab was wonderful to work with, she added. He’s so unassuming and “very Pinoy.” Best of all, he also loves Swatch.

It was mere coincidence that the watch was launched four days before the opening of the Asia-Pacific Economic Cooperation (Apec) forum in Manila, during which many Filipinos got caught up in a bit of flag waving.

“We didn’t intend to time it with Apec,” said Ramos. “We were timing it for the Swatch anniversary and the coming Christmas season.”

Since they were using the Philippine flag as the watch’s focal point, Ramos had to consult historian and Inquirer columnist Ambeth Ocampo, former chair of the National Commission for Culture and Arts and National Historical Institute.

Wearing the flag on the wrist is more than just a mere display of one’s nationalism, said Ocampo.

As a symbol of the country, the flag should remind all Filipinos of the sacrifices their forefathers went through to attain independence.

Unlike in the case of Britain’s Union Jack, and the United States’ Stars and Stripes, the Philippine flag, as mandated by the constitution, cannot be written on or used in its entirety on articles of clothing, including wristwatches.

The most you can do is put elements of the flag, but not the entire flag. Patches stitched on Filipino athletes’ Olympic uniforms and those of the police are actually illegal because they show the entire flag, Ocampo added.

“The law was written during a different time,” he pointed out, referring to the absence of instant communication and social media. “Actually, it should be reviewed. But while it is still enforced, you can’t violate it.”

In keeping with the event’s nationalistic theme, guests came in Filipiniana attire. Production designer Gino Gonzales drew inspiration from Filipino gatherings in the past by opting for a series of huge banquet tables.

He turned the entire first floor of the Swatch Center into a huge banquet hall festooned with prints, which doubled as lanterns, from BenCab’s “Larawan” and “Ode to the Flag” series.

Both ends of the venue were flanked by paintings of the Philippine flag, while excerpts from the “Panatang Makabayan” cascaded from both artworks.

Gonzales originally wanted a long banquet table where people would come together to honor the country and BenCab’s artistry. But in order to maximize space, he settled on a series of smaller tables. In lieu of rice stalks, he bundled together wheat stalks as tabletop décor.

The buffet dinner was catered by Kai Restaurant. Both the restaurant and Swatch’s staff wore costumes that hark back to Spanish colonial times.

An after-dinner show directed by Rowell Santiago featured some of the country’s finest musical performers. Mark Bautista, Sheila Valderrama, Aicelle Santos and Jerald Napoles, accompanied on piano by Ryan Cayabyab, sang a selection of Filipino standards, including “Ngayon at Kailanman,” “Ako’y Isang Pinoy,” and excerpts from the musicals “Noli Me Tangere” and “Rak of Aegis.”

Bautista and Valderrama sang the lead parts in the musical version of Jose Rizal’s novel “Noli Me Tangere,” while Santos and Napoles handled the numbers in “Rak of Aegis.”

The four sang as a group in Florante’s “Ako’y Isang Pinoy,” before segueing to the National Anthem.

“This ‘Ode to the Flag’ watch is important not only because it’s our anniversary,” said Ramos. “Being a vibrant global brand, Swatch should always have a connection with the local market.”