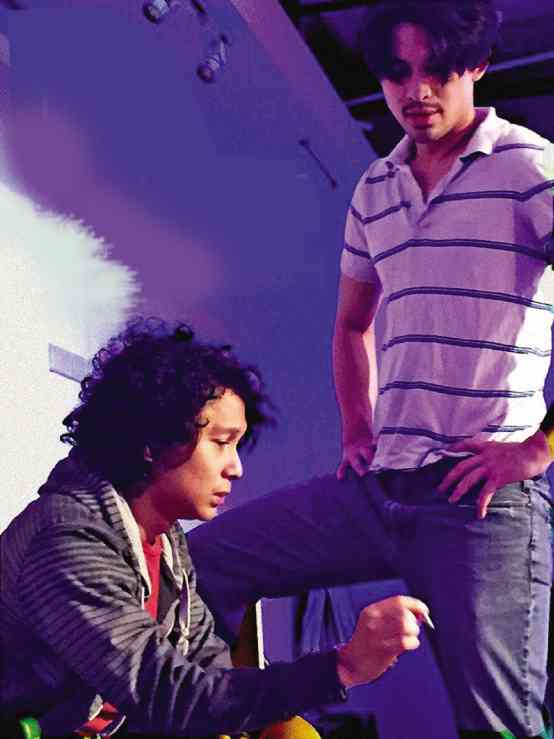 It’s never really clear what’s going on in the minds of the three well-off teenage New Yorkers at the heart of Kenneth Lonergan’s “This Is Our Youth.” They kiss and curse and flirt, fire insults, plot schemes, smoke pot. Yet it’s hard to shrug off the feeling that what we’re seeing is only the tip of the proverbial iceberg; in this delirious adolescent fever dream, who exactly are these people?

They themselves wouldn’t know. Such is the uncertainty of youth, the dread that comes with being on the brink of adulthood, which Lonergan’s play captures with piercing precision and which Red Turnip Theater has summoned to electrifying, hyperkinetic life in a production directed without unnecessary flourish by Topper Fabregas.

The youngsters in question are Dennis, a drug-dealing borderline-psychopath; his best friend Warren, who stumbles into his apartment late one night with $15,000 in stolen cash; and Jessica, the fashion student whom Warren has the biggest crush on. It’s a formulaic story—a trio of bored, affluent kids with a chunk of money, some dope and stretches of time to spare—but Fabregas and his team have spun a damn entertaining show out of it.

It is not “story,” meaning the advancement of plot, or a seamless jump from scene to scene, that seems to be this “Youth’s” primary concern. Rather, what this production generously dispenses is “sensation”—specifically the hallucinatory euphoria, that nothing-can-stop-us, me-against-the-terrifying-world feeling only the perpetually high and pitifully young would know too well.

It is this addled state of mind that Jef Flores and Nicco Manalo, as Dennis and Warren, respectively, wallow in. They are lost youth, souls trapped in bodies they barely understand, struggling to set out on their own with wings that won’t entirely flap into flight.

Caged in Dennis’ well-furnished Upper West Side Studio (designed by Kayla Teodoro), where the marijuana haze never seems to lift, Flores and Manalo play out an unlikely friendship in the form of a bully-and-victim dynamic, often to hysterical effect. Posters of Spielberg’s “Jaws” and Scorsese’s “Mean Streets” on the wall can only be silent spectators to the drugged and droll situations that unfold; these guys are so high, they can hardly think straight.

Lonergan’s crackerjack dialogue finds the perfect vessel in Flores, who first made his name earlier this year with a subdued but no less compelling performance as the star of Repertory Philippines’ underappreciated “4000 Miles,” and who now vanquishes any remaining doubt that local theater has indeed found a new leading man.

His portrayal of Dennis, in which he scours the rocky, unpredictable terrain of a druggie’s explosive mind, is at once enthralling and frightening. You see his eyes widen with excitement and shrink with boredom within their sockets and it’s only a split second later that the confusion actually sinks in: How thin is the line between reality and imitation? Flores is so good in this role, it’s sometimes too difficult to tell.

And the way he plows through the volatile landscape of Lonergan’s language can at times be jaw-dropping. One moment, he’s making the phrase “dastardly deed” sound like something anybody would say; the next, he’s smoothly salvaging the script’s unfortunate misstep into the painfully obvious (during the second act’s climax) with his flawless, masterful handling of a 15-minute monologue.

Manalo is even better. In a particularly strong year for the nonmusical play, it would be no exaggeration to say that his performance as Warren may just be the best addition to an already-delectable panoply of fine turns by the male lead.

Adolescent awkwardness has never been this adorable, or, for purely hypothetical purposes, desirable. To watch Manalo’s Warren be the butt of jokes, the clueless object of Dennis’ cruelty, is to witness a carefully studied performance at play. The timing is never imperfect, the comedy of every line and scene never careless or taken for granted.

Warren’s discomfort, his ungraceful innocence and the social tragedies it attracts, is our joy, and Manalo’s playing of him is the hook that keeps the audience in sync and constantly hungry for the unruly goings-on in this play.

Cindy Lopez’s performance as Jessica is nowhere near as lived-in as that of her coactors. Her accent, a breed we’ve heard before from progeny of a certain exclusive girls’ school in the metro, is perennially at odds with her cast mates’ refined American twang.

What’s far more interesting, however, is that the very elements that should sink her performance instead enliven it. This tentativeness, this self-conscious, spaced-out state awash in her face and in her studied mannerisms, is exactly what Jessica sounds like on paper. There is a Filipino word that best describes her: “lutang”—and that’s not meant as a diss.

It is this very trait that Lopez fully embodies (whether she’s aware of it or not) during the show’s emotional highlight—Warren and Jessica’s initial encounter, which Manalo and Lopez turn into a beguiling courtship that starts out as an amusing, long-winded conversation involving protons, calcium molecules, Reagan-era politics and the meaning of existence and culminates in an inelegant dance, a kiss, the works.

That sequence, by the way, beautifully illustrates what appears to be the gist of Fabregas’ direction. Though there is a blatant sense of uncontrollability, a whirlwind of hormones and unsuppressed impulses raging through this show, there is also an unmistakable whiff of calibration in the air.

The performers are apparently functioning on a purely instinctual level, yet that sliver of control pulsating through the proceedings cannot be ignored. These characters are young, restless and clueless. One is never sure just what it is they’re thinking, though one thing is clear: You can’t take your eyes off them.

Or, for that matter, the first-rate play they’re inhabiting.

E-mail the author at [email protected], visit him at www.vincengregorii.blogspot.com, or follow him on Twitter at twitter.com/vincengyu.