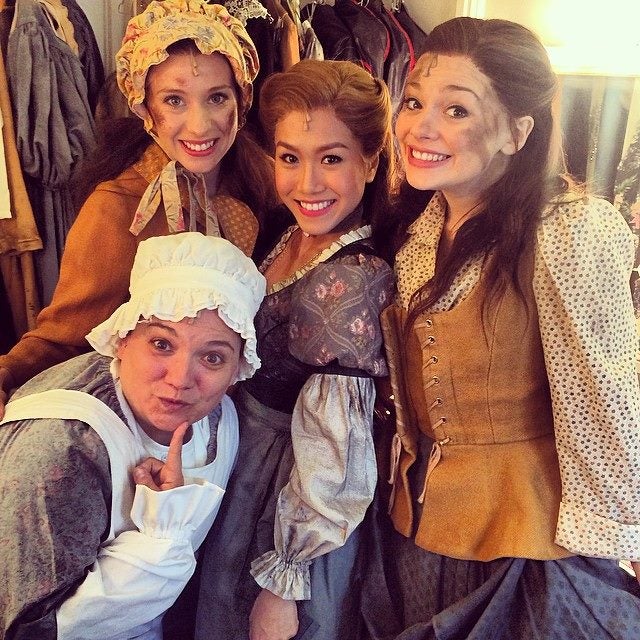 When Rachelle Ann Go was in London two years ago for her final “Miss Saigon” audition, Cameron Mackintosh asked her what West End show she’d like to see.

“I want to watch ‘Les Mis,’” she told him. He gave her two tickets.

The night she watched “Les Miserables” with her uncle, Rachelle was so riveted by the character Fantine, she said to herself, “I will do that role. I will do that…”

It wasn’t the first time she did something like that, Rachelle told Inquirer Lifestyle Theater in an interview on Skype. “Noong pinanood ko ’yung ‘Miss Saigon’ sa Canada, sabi ko, ‘One day, I will do this.’ I claimed it… Wala namang masama, i-ke-claim ko rin ’to (‘Les Mis’).”

And both times, it happened.

In 2014 she went on to play Gigi, a stripper and one of the major characters in “Miss Saigon”; and in June this year, she joined the cast of “Les Miserables” as Fantine, a role she will also play when producer Cameron Mackintosh brings the show to Manila next year.

“I’m so excited. When they offered it to me, gusto ko na umuwi,” Go said, laughing. “Gusto ko nang lumipad, I want to do it now.”

We interviewed you just as you were starting in “Miss Saigon.” Have you adjusted to life in London? How much have you changed?

Oh gosh, a lot of things have changed. I feel like I’m a grown woman. Nagdalaga ako. Before I came here, I didn’t know how to cook, and I didn’t really commute in the Philippines. I learned a lot as a person. Ang dami ko ring natutunan as an artist—discipline foremost. I was really shy when I first got here; the culture is different. But I’ve gained lots of friends already…

What’s it like being the only Asian in the ‘Les Miserables’ West End cast?

And this time, the costume isn’t as revealing.

Were there lessons you learned while playing Gigi that you take with you as Fantine?

You know, kahit si Claude-Michel Schönberg (“Les Miserables” composer), he also said this… Gigi and Fantine, meron silang common factor na pinagdaanan—struggles sa buhay, sacrifices, they both sold their bodies to earn money, to be out of that situation. Siguro kaya madali to do Fantine kasi nagawa ko as Gigi, you know, ’yung dignity nandoon kahit na mahirap ’yung pinagdadaanan. Even the song “Movie In My Mind” talks about dreaming, and “I Dreamed A Dream” is basically the same thing. Costume lang ang pinagkaiba.

We were all excited when you joined the West End cast of “Les Mis.” Can you talk about that process?

They offered me to do Gigi again for another year. Sabi ko, magiging happy pa rin kaya ako? I enjoyed it for a whole year, ang dami kong natutunan [but] kung gagawin ko ulit, tapos one year, eight shows a week, baka magsawa ako. I talked to my management and my parents. My family actually told me not to renew; they said to just go back to Manila and do pop music again. For weeks I was so confused. I talked to my manager, “What should I do?” And they were like, “You just need to follow your heart, kung saan ka at peace, kung saan ka masaya.”

I prayed about it. I felt like I wanted to move on, do something else, learn other stuff and challenge myself, so I told the company I want to do other roles. They said they were having auditions for “Les Mis.” I auditioned for the role of Fantine. They asked me if I wanted the role of Fantine or Eponine. Pinili ko ’yung Fantine.

I went through the whole process, medyo mahirap, ang daming levels. In the final round, kasabay ko ang isa who played Fantine in Spain. So I was really nervous. I felt like I wasn’t going to get the role. ’Yung kasabay ko ilang years na niya ginagawa ’yung role. I didn’t hear from the company for weeks. I thought, ah wala, hindi na siguro ako makukuha. And then they called me, nandun si Schönberg. They played “I Dreamed A Dream” and asked kung saan daw ako comfortable na key. So I was thinking, “Binibigay niyo na ba sa akin ’yung role?” Then, after a few days, they called me, set up a meeting and said, “How do you feel about playing Fantine?” Hindi ko ma-absorb nung time na ’yun biglang may migraine ako! Hindi ako makapaniwala nung sinabi nila ’yun.

How do you feel about bringing the show to Manila?

Theater fans here are excited, too; tickets have been selling well.

What is it about “Les Mis” the musical that people love so much? It’s been around for 30 years and people still can’t get enough of it.

I guess because there are lots of different characters, different stories that people can relate to. I can relate to Fantine, I can relate to Eponine. If you bring your entire family, bawat isa sa kanila makaka-relate sa story. It’s about love, sacrifices, forgiveness and grace. And my favorite line in the show, toward the end, is when we sing, “To love another person is to see the face of God.” Spiritually, nakaka-relate ako sa story.

Would you like to do Eponine, too, like Lea Salonga did? Or is that a weird transition, starting with Fantine and then doing Eponine?

Actually medyo weird nga ’yun. It’s like doing Gigi and then Kim. Parang ganun eh. I don’t know, because I feel like the company sees me as Gigi and Fantine already. And with my age, parang mahirap na bumaliktad pa. I don’t know. I can try. One day maybe. You’ll never know. It’s all about acting naman. Ang Asian naman kayang magmukhang bata eh.

Did you watch the other actresses’ take on Fantine? Is your portrayal of the role inspired by anyone?

I didn’t watch any videos. Kasi ako ’yung tipong ’pag may nakita ako, nagagaya ko, even if it’s not my intention. Even before the audition, I tried not to watch anything para magawan ko ng sariling atake ’yung role. The director is really good. He helped me a lot kung paano dadalhin ’yung story. Gusto niya may sariling flavor ko ’yung character. I didn’t watch any videos except of course the 10th-anniversary and 25th-anniversary concerts of “Les Mis.”

What was it like performing with Patti LuPone in the 30th-anniversary show?

Oh my gosh, it was like a dream. When they told me and Carrie (Hope Fletcher) they were planning to do that quartet with Patti LuPone and Frances (Ruffelle, the very first Eponine), parang … “Seryoso ba ’to? Talaga bang mangyayari ’to?” And then when it happened, during rehearsals, we just couldn’t stop giggling kasi talaga … legend ’yun ’di ba, lalo na si Ms Patti LuPone. It was very surreal. I was really nervous during the concert. I was shaking. But yeah, I had fun and enjoyed the moment.

Is it true you play multiple roles in the show?

I’m part of the ensemble. Since I’m the smallest, ako ’yung urchin, one of the little boys running around the barricade. Hindi mo ako makikita kasi lagi akong tumatakbo.

What’s the most challenging thing about playing Fantine?

All your West End dreams have been coming true. Do you have other dream roles?

Do you plan to keep working in the West End for a while?

So you really want to focus on theater for now?

You know, I want to do pop music at the same time. Parang gusto ko nga mag-record ng album. Since the show is every night, I have time during the day. I want to do something else if that’s possible. Actually, Cameron asked me, “Do you want an album back in the Philippines or here in London?” I said, “Definitely.” And he said, “You can do both, you know. Go back to the Philippines and do stuff there, and then do stuff here.” So maybe.

But do you miss pop music?

I miss doing it. When I was in “Miss Saigon,” nakakatawa, sometimes when I miss singing pop, nadadala ako dun sa kanta, napapakulot ako, napapa-riff ako. But in “Les Mis,” No. 1 rule, specific ’yan sa akin, “Rachelle, no riffing.” Because the company knows that I loved to riff during “Saigon,” and this (“Les Mis”) is a classic musical, you’re not allowed to mess it up or do it in a pop way. But yeah, I miss it. I do some stuff here ’pag may gigs, which is good. I get Sunday off so may mga shows minsan, ginagawa ko ’yun minsan.

What do you want to tell Filipinos who are excited about you coming to Manila to play Fantine?

Unang-una gusto kong magpasalamat sa lahat ng Pinoy, ’yung suporta na nakukuha ko, lagi ko ngang sinasabi, even if I’m here in London, I can still feel the love of all Filipinos. Via Twitter every day they’re sending their love. I’m very excited to share with everyone what I’ve been doing here, to share what I love most. Finally, makikita na nila ’yung “Les Mis.” I can’t wait to be home and eat Filipino food again.

“Les Miserables” opens in Manila in March 2016 at The Theatre at Solaire. Tickets are available through www.ticketworld.com.ph or 8919999. Visit www.lesmis.com.ph.