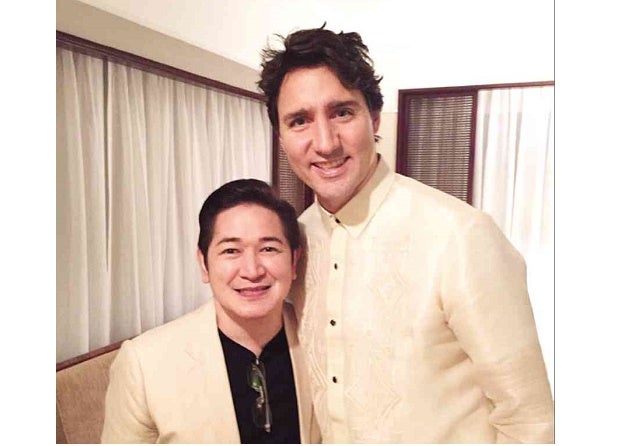 An informal survey we did among fashion watchers seems to mirror the online poll’s results.

“Because of his height, Trudeau looked quite dapper,” said businesswoman Ruby Gan. “And so was Nieto. From what I saw from online pictures, these two world leaders had their collar buttons closed. Thus, they looked very good, very polished.”

“His barong fit perfectly and the length was right,” said Gonzales of Leung. “New Zealand Prime Minister John Key also looked great. I only wish he wore black instead of navy pants.”

Despite wearing a barong that was a tad loose, the diminutive Nieto looked “dashing,” Gonzales said. Obama would have looked better, he said, had he worn “a traditionally cut barong with four buttons in front.”

“I wished Obama and many of the Apec leaders were advised to close the top button,” said Gonzales. “Among the women, my favorite is the wife of Thai Prime Minister Prayuth Chan-ocha. She looked regal in her piña blazer, which she accessorized just right.”

A good number of netizens may have noticed Obama’s sleeves, which looked a tad short, but network stylist Anjoy Hipolito doesn’t mind.

“Obama tops them all perhaps because of his height, color, posture and confidence,” he said. “Many of the Asian leaders also carried the barong well.”

If they want to look impeccable in a barong, men should find the time to fit, said Cabral. It doesn’t come as a surprise that Trudeau, Leung and Turnbull looked great because they fit their barong hours before Wednesday’s welcome dinner at the SM MOA Arena.

Cabral, who oversaw the barong’s embroidery, which mirrored each country’s culture and history, spent four months working on the leaders’ outfits. Since the eyes of the world would be scrutinizing his creations, he decided to close his shop for a month to focus on the project.

“It was more difficult to do the men’s barong because they had to fit well,” said Cabral, who relied on measurements provided by the leaders’ offices to Malacañang. “The women’s piña jackets, which they wore over their own black dresses, were much easier to do.”

Because some of the measurements provided were incomplete, sometimes even “unbelievable,” Cabral and his team had to study the build of some of the leaders in pictures and videos. They filled in the blanks, so to speak, to produce decent barong with proportionate embroidery.

If there was one fringe benefit that comes with such a stressful job, apart from the global publicity, it was the chance to meet some of the leaders.

Cabral even had his picture taken with Trudeau during fittings. He didn’t waste the chance to exchange niceties with the Canadian leader.

“I told him, ‘Mr. Trudeau, a lot of girls had lined up this morning in my shop to assist me in this fitting,’” said Cabral. “He just laughed and gamely posed with me for the camera with his arm around my waist.”

Despite the stress and shop closure, Cabral would do it all over again, if given the chance.

If made well and worn with panache, a barong has the power to transform almost any man—regardless of culture, color, religion and even age—into a better, more dashing version of himself.