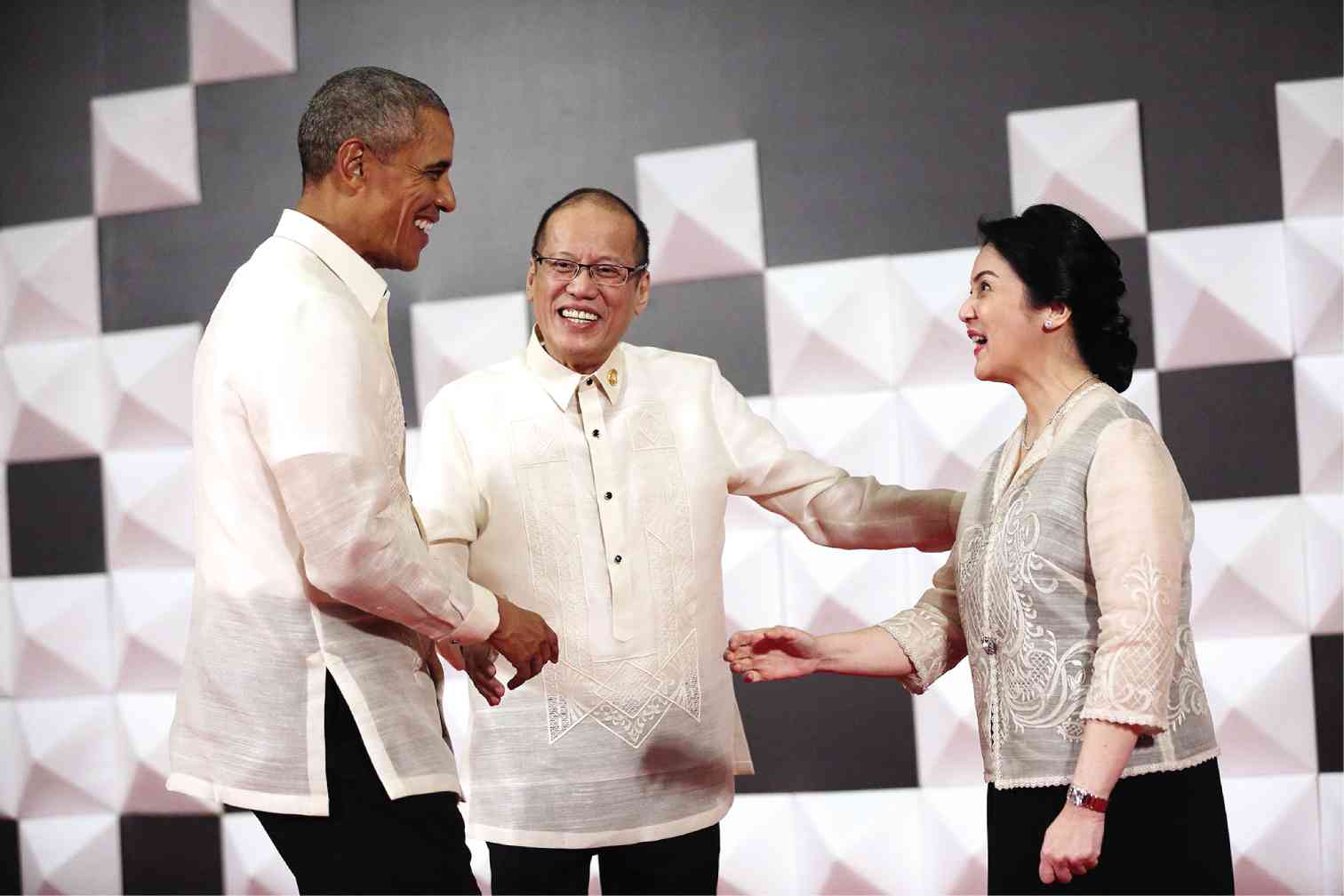 When bachelor President Aquino entertains, who needs a first lady?

Team Trudeau or Team Nieto? Time to move on, folks.

But before we do, something must be said about the style of the Aquino administration (the pundits take care of the substance); to be specific, the hosting style of a bachelor President.

President Aquino has no first lady to do cohosting chores.

So how does the bachelor President manage? And how do we rate his entertaining style?

In truth, however, his four sisters have competently risen to the challenge. They take turns being by his side in official or state functions. Or as was the case during the Asia-Pacific Economic Cooperation (Apec) last week, they were all around to tour the spouses of the economic leaders around historic Intramuros.

Even the most low-key of them, Viel Aquino-Dee, stepped up to the plate and helped Mr. Aquino entertain Chile President Michelle Bachelet at a state luncheon on Monday.

Kris gave a beautiful bouquet to Paulina, the beautiful daughter of President Nieto, at the end of the dinner and graciously took Paulina’s picture with Darren Espanto and Juan Karlos Labajo—grand finalists of “The Voice Kids” 2014, who gave a rousing performance that night.

Beyond the presence of his immediately family, however, it is apparent how Mr. Aquino leaves the style of entertaining—from the décor to the performances—to the experts in his staff.

The result has been not only competent and appropriate, but also tasteful, classy—and more important, ingeniously Filipino. Not lavish or extravagant at all.

Lifestyle editors have had the enviable and logistically demanding (try planning your wardrobe) task of occasionally covering Palace functions, in our case, from the Marcos years (just as a tag-along), to the Ramos and Estrada years.

We’re in a position to compare—been there, done that— yet we prefer to see the unique style and character that each political administration brings.

To me, the coverages build up a trove of memories.

The Aquino administration functions are not over the top.

What’s noteworthy is how the Palace staff has consistently used native materials, some of them crafted by artisans from all over the country. The staff blends these in a contemporary, chic setting—never stereotypically native, or as the acerbic National Artist Rolando Tinio loved to rant against—“tinikling mentality.” Not at all.

The staff has sourced flowers and crafts from all over, Divisoria, Quiapo (like the carabao crafts to decorate the state dinner of Obama last year), Laguna (the sampaguita garlands used to drape the stairway and the chandeliers last year), Pampanga, Quezon (the Pahiyas kiping used in a 2012 state dinner), and Cebu (Kenneth Cobonpue’s furniture and table fixtures in the Apec Welcome Reception).

Filipino artisanship is shown to the max in these décor, from the stringing of the sampaguita to the making of the pastillas wrappers (borlas de pastillas).

READ: It’s fiesta time for Apec CEO Summit and ‘pastillas’ is the peg

The flowers give the Palace a happy, young vibe, from the staircase to the Rizal Hall, the long table leading to it always used as a showcase of various arrangements.

In the state luncheon for Bachelet during Apec last week, the long table was done away with and, instead, clusters of floral topiaries stood at the entrance.

Since the Chilean president loves roses and tulips, these blooms were used as centerpieces of the presidential table. Since tulips are costly (yes, that practical), roses and mums in red, rose pink and deep purple were arranged at the tables of guests.

At the state dinner for Mexican President Nieto, silver candelabras (hand-me-downs from the Marcos era) were brought out to hold giant balls of red roses.

To perform before state guests and dignitaries, the Palace staff has tapped almost all, if not all, top Filipino artists.

It’s been very democratic, so far. A cross section of Filipino performers, directors and musical directors is tapped, led by Gina Godinez.

The shows bare the rich hybrid of Filipino culture: folk and ethnic, colonial and western, contemporary and hip, and always, romantically musical.

This approach includes research into the visiting dignitary’s preferences. For instance, for the 2014 state dinner for Obama, Kuh Ledesma emerged from the curtain singing “Let’s Stay Together,” the American president’s favorite song, to which he and wife Michelle danced during his inaugural.

For Bachelet was the medley of Beatles hits starting with “Michelle,” for she is said to love The Beatles.

Since Nieto brought his daughter who loved dance music, Pops Fernandez opened the show with “I Gotta Keep Dancin’.”

READ: For the young daughter of Mexican president, a dance-filled state-dinner program

The physical setup is simple—there’s no elevated stage. The curtains of Rizal Hall are closed. The artists emerge from it and perform before the presidential table. It’s no Cecile B. DeMille production. It’s not even complicated.

The choice of banquet caterers is also democratic. The Palace has used many of the country’s five-star hotels and the restaurants known for being innovative.

On top of these is Social Secretary Susan Reyes, whose stints in fashion retail and exposure to Manila’s social circuit have given her a judicious eye. She’s got taste but is extremely low-key.

Working with her is Palace director Jun Mogado, who must know most of the artisans and suppliers around, director Mannay Mercado, florists Nick Raza and Rene Sumalinog with assistants Ramil Atencio and Jeremy Escubido.

“These are the people who make things happen every day and each time we have a state event,” said Reyes.

For the Apec, she was assisted by Mariel Tolentino and Bagwis Panaligan.

Given this staff’s output, Mr. Aquino may not need a first lady after all—for now.