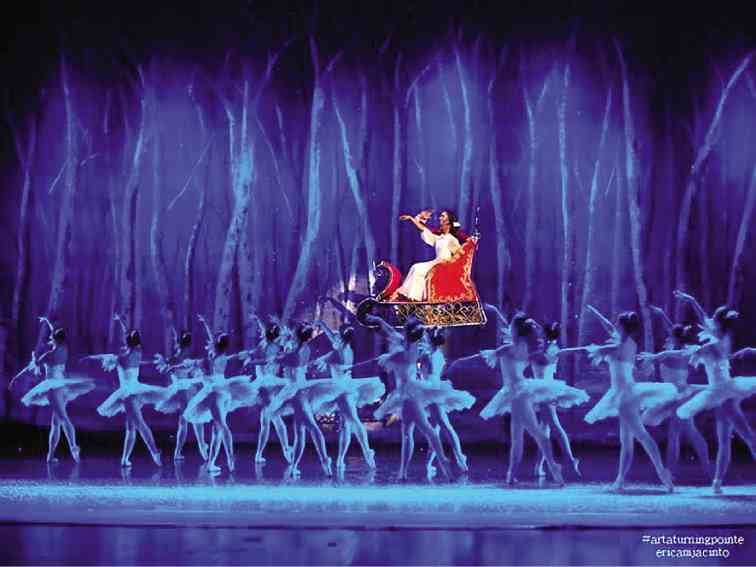 HEAVEN-BOUND Clara with her Nutcracker Prince in PBT’s “The Nutcracker.” Excellent staging is by ballet master Anatoly Panasyukov. ERICA JACINTO.

THE FRIDAY-NIGHT victims of the Apec-induced traffic were the dance afficionados who, against all odds, went to watch “The Nutcracker,” mounted by the Philippine Ballet Theater (PBT) with Russian ballet master Anatoly Panasyukov at the helm.

Opening on a Friday night when traffic was at its worst, this latest Manila production of “Nutcracker” was a balm to one’s weary spirit, with its well-woven tale of little Clara (Regine Magbitang) who dreams of her Nutcracker coming to life and gets the ultimate Christmas treat of her young life.

The fairly impressive and moveable sets framed the action with dispatch, complete with the spectacle of a heaven-bound Clara who would meet her Sugar Plum Fairy (Loby Pimentel) and her gaggle of dancing sweets.

What probably made this version special was the participation of some 100 young dancers from several dance studios in assorted roles, from the young army of the Nutcracker and the children of the Mother Ginger (danced with pizzazz by Rolby Lacaba) to the playmates of Clara.

The Russian revealed a high level of character dancing, which made him stand out on the party scene.

The fight scene led by the fierce Mouse King was most engaging. The little Nutcrackers aimed their guns at the rats and the make-believe ammunition toppled a row of them instantly. It elicited “wows” from the audience.

Applause greeted the corps de ballet when it broke out into little ensembles as dancing snowflakes.

All eyes were on Phillips as the Prince and Pimentel as the Sugar Plum Fairy in the much-awaited grand pas.

She came in very strong perhaps due to the technical demands of the part, but showed some fairy-like qualities toward the end. Her carefully executed turns didn’t dazzle, but the steadiness was commendable.

As for Phillips, his performance combined great acting and intelligent dancing. He could very well make the entire ballet his own, but his sense of ensemble was obviously greater than the urge to be star soloist. This made his role more encompassing than a mere showcase of bravura dancing.

The Clara of Magbitang gave us a wonderful illusion of the child in her. Her finale variations with Phillips were equally compelling.

PBT president Sylvia Lichauco de Leon thanked the audience for braving the traffic. She added that, for the past 29 years, the company founders and trustees had maintained a commitment to nurturing the talent and passion of its young dancers.