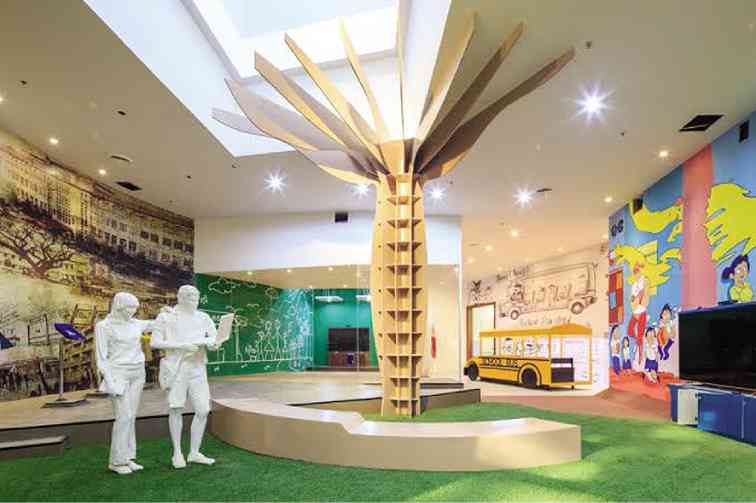 SCENE at the education section

AN INTERACTIVE sociocultural museum, touted to be “pioneering” in the field, opened recently inside Quezon Memorial Circle in Quezon City.

The Quezon City Experience Museum or QCX is a five-pod green architecture museum complex with 16 galleries that tell the history and culture of the city, and allows visitors to experience and interact with the displays through the use of technology.

It has a hundred seating capacity theater, lecture and conference rooms, and rooftop gardens which could be used for events such as outdoor exhibits.

“QCX depicts the life of the city as a city, the life of the people of QC and how they contributed [to what the city is now] from the time of its inception to the present,” said Quezon City Mayor Herbert Bautista.

He described the museum as “experiential, a highly engagial facility.”

Vice Mayor Joy Belmonte meanwhile told Inquirer Lifestyle that QCX is a social history museum which veers away from putting politicians in the limelight.

“It’s really the people that make a city great, not the politicians behind it. So, we decided to make a museum that is dedicated to the people, about the people, and which rallies them toward a [brighter] future,” she said.

Curatorial direction of the museum was done by heritage expert Eric Zerrudo, former director of the Government Service Insurance System Museum and Metropolitan Museum of Manila, and now the director of the University of Santo Tomas Graduate School-Center for Conservation of Cultural Property and Environment in the Tropics.

QCX is the third museum to open inside the Quezon Memorial Circle after the recently reopened Museo ni Manuel Quezon at the Quezon Memorial Shrine and the Quezon Heritage House, the old vacation house of the former President previously located in New Manila district which was transferred to the site and opened as a museum last year.

Conceived in 2006, QCX is an exemplar of green architecture, working around with existing trees which were incorporated in the complex. Structures, scenes and other cultural properties in the city were recreated and presented in different sections from its history to the challenges it faces today.

For more information on QCX, contact 7346996 or e-mail [email protected]