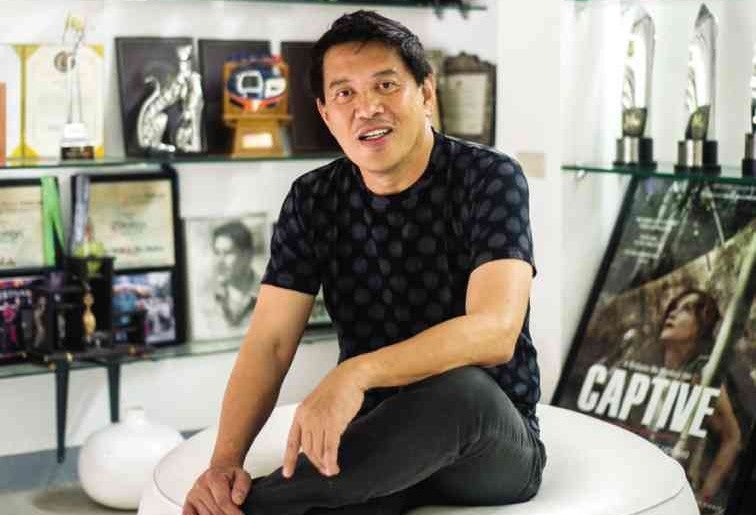 BRILLANTEMendoza in the living room of hisMandaluyong house, amid trophies and plaques that attest to his triumph as a filmmaker in the international film-festival circuit. ELOISA LOPEZ

Mendoza, who won the best director award of the 2009 Cannes Film Festival, will also attend the SGIFF screening of his latest opus, “Taklub,” his highly dramatic movie on the plight of victims and survivors of Supertyphoon “Yolanda” in 2013. The film won the ecumenical prize at the 2015 Cannes.

“It is an honor not only for myself but also for our country because I am [chair] of a jury [composed of] internationally recognized personas in world cinema,” Mendoza told Inquirer. “This is an affirmation of Filipino filmmakers and their artworks, with their stunning rendition of Filipino stories. Our stories in fact are now being acknowledged and enjoyed, not only by film critics but also by foreign audiences as well.”

“Every time that film festivals invite me to judge films in competition, I [try to be] blind to such matters as what country a certain film [comes from] or who the director is. I always want to be surprised—to see or learn something new. For me, that’s the magic of cinema.”

Mendoza added there are really no specific standards to follow.

“As one of the members of the jury, I need to have an open mind and an open heart,” he said. “As much as possible, I see things as they are, and I don’t judge or critique a film based on intellectualism. Despite its technical flaws or even its cinematic grandeur, for me, what makes an effective film [is] the filmmaker’s clarity of voice; what he or she really wants to say in the film.”

Mendoza is arguably the best known and most critically acclaimed Southeast Asian filmmaker in the world today, his movies having competed in the Top 3 film festivals in the world —Venice, Cannes and Berlin.

His debut feature “Masahista (The Masseur)” won the Golden Leopard Award at the 2005 Locarno International Film Festival in Switzerland and paved the way for the rise of alternative cinema in the Philippines.

He is also the only Filipino director to have been accorded the Chevalier dans l’Ordre des Arts et des Lettres (Knight of the Order of Arts and Letters) by the French republic.

Mendoza said international film fairs such as Singapore’s are a boon to filmmakers.

He said his own victories at Locarno and Cannes directed the world’s attention to the Philippines and Southeast Asia.

“Suddenly the eyes of the world are looking at our country and curious about our stories,” Mendoza said. “Singapore, in fact, has Anthony Chen who also won in Cannes. There are so many Asian filmmakers in the past who set the bar and open windows of opportunity to budding filmmakers in Southeast Asia.”

“Asian cinema has distinct qualities,” Mendoza pointed out. “Of course, Asia is the most diverse continent in the world, and each region and country has its special and unique strengths.”

But he pointed to the common denominator of Asian films—the strong focus on the family. “We are really sensitive to this topic, and that uniquely sets us apart from our western counterparts.”

To some extent, he delves into the Asian family in his movie “Taklub,” which he said he hopes Singaporeans would like.

“I hope they feel the unique qualities of Filipinos while watching ‘Taklub,’” Mendoza said. He added he wants his international audience “to feel the resiliency” of Filipinos. “I hope by watching the film, they will feel blessed … that they won’t experience this kind of calamity in their lifetime.”

Emerging Filipino filmmaker Christopher Gozum will be part of the SGIFF’s Southeast Asian Film Lab, where he will learn more about story development and stand to win $5,000 to produce his first feature film. He will be mentored by Terence Change from Hong Kong, Sherad Anthony Sanchez from the Philippines and Yong Mun Chee from Singapore

A Filipino movie in competition will be “The House by the Bamboo Grove” by Alvin Yapan. The film earlier won the best picture and best actress (Mercedes Cabral) awards in the Filipino New Cinema section of the World Premieres Film Festival Philippines.

Aside from “Taklub,” other Filipino movies to be shown in the Asian Vision section of the festival is the latest movie of Jun Lana, “Shadow Behind the Moon,” as well as Andrea Capranico’s “The Landscape Within” and Dodo Dayao’s “Violator.”

Meanwhile, in the Classics section, to be exhibited are the restored versions of Lino Brocka’s “Insiang,” the first Filipino film selected for the Cannes Film Festival, and Lamberto Avellana’s “Portrait of an Artist as Filipino.”

The SGIFF will open formally at the Marina Bay Sands on Nov. 26. Opening film is the Taiwanese film “Panay,” directed by Cheng Yu-chieh and Lekal Sumi.