High-power scion is serious about staying in shape 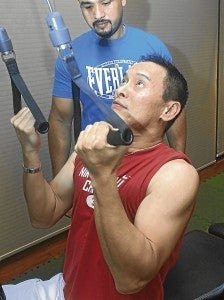 Over a year ago, Lucio “Bong” Tan Jr., son of taipan Lucio Sr., walked with a stooped posture, hampered by lumbar spondylosis, or low-back pain due to  a disc ailment.

After training with Jonnel Tuano Cruz, the executive now strides with confidence,  runs several companies with ease, and scores a minimum of 20 points in a basketball game.

Tan wears many hats. He is  founder and chair of MacroAsia Corporation, which provides  supplementary services to airlines; president of Tanduay Distilleries; director of Philippine National Bank/Allied Bank, Philippine Airlines; executive vice-president of Fortune Tobacco Corporation; and Foremost Farms, Inc., to name a few—and will open the largest energy source company in Quirino province next year.

An athlete at heart, Tan plays golf with a low handicap of 8 and swims, aside from playing basketball. He’s been doing weight training keep him agile in all his sports.

The interview was held at Tan’s residence. He entered the wine cellar, crossing the glass footbridge that encases Old World wines. He was clad in a white t-shirt, baggy shorts, and rubber shoes. The sheer white shirt revealed the developed pectoral muscles and trim waistline.

“I was working out on my own,” said Tan. “When I met Jonnel, I had a back problem.  I needed someone to watch out for me. I had this pinched nerve that was caught between the discs. It was painful. I could not walk straight. He (Cruz) had a system and he guided me. I told him not to put strain on my lower back, but also not to compromise on building the strength of the rest of the body.”

With more than 15 years of training experience (and action stunts in the movies), Cruz  is one of the four instructors from the Philippines certified by the International Kettlebell Fitness Federation.  With a list of clients from CEOs to celebrities, he even got   K.C. Concepcion into a bikini for the Bayo’s summer campaign, and actor Rocco Nacino ripped for the cover of Men’s Health.

Cruz maintains that his programs focus on well-being and function, or helping the individual perform better in his or her activities. The workouts use big and small muscles together so that ultimately, they are  proportional and efficient.  Looking good is just a by-product.

Cruz observed that for the longest time, Tan was working on a repetitive program that his body had gotten accustomed to. Though more adroit in his routine, Tan says his power had reached a plateau. Thus, Cruz devised a program by constantly adding variations to his workout.

He explained that by changing the apparatus or the  exercise parameters, Tan’s body would have to work harder, to adapt to the exercises. Hence, he’d be  burning more calories and increasing muscle fibers.

Cruz explained, “Sir Bong was used to weight lifting in another gym that was hardcore and redundant. We started with overall conditioning, then went into a three-day split program. He was surprised why we didn’t repeat. If in the first week, the chest exercise used barbells; dumbbells came in the second week, then body weight in the next.”

The trainer likened it to confusing the brain and the muscles by giving them something they didn’t expect. “When I teach, I break up the muscle memory,” said Cruz. A factor to successful weight resistance training is to  arouse the nervous system so it can stimulate adrenaline, pump up the heart, and increase the lung capacity.

This “confusion” creates the positive stress or agitation that enables the body to make more effort, thereby burning a lot of calories even when it’s recovering from exercise.

Initially Cruz made Tan use light weights of 15-20 lbs. Through time, Tan could bench press 250 lbs and lift 70 lbs for the shoulder press. Core conditioning exercises are done on the physioball; he does back extensions just to lengthen the spine without arching it.

After the workout, Tan takes a plunge in the gym’s cold pool and jacuzzi. The alternating temperatures are therapeutic for his back. “I don’t feel the pain and I walk out with a straight posture,” he said.

In business meetings,  his colleagues noticed Tan’s buffed body underneath his barong.   His waistline went from 34 inches to 31. “Boss is a mesomorph. In three sessions, he bulks up fast,” said Cruz.

Lately, Tan has been focusing on endurance to make him last longer in his sports and decrease bulk.

“At my age,” said the 44-year-old scion, “if you don’t do gym and you get injured, your career will be cut short.”

At the Singapore-Asia Basketball Tournament, the PAL team garnered the championship. Tan, who played guard, impressed the crowd with his high jumps.  Likewise, the PNB/Allied Bank team also won the championship in the local interbank tournament.

Asked how Tan manages his time with his many companies and sports, he replied, “Schedule. Don’t procrastinate. If you postpone until tomorrow, chances are, it’ll get screwed up.”

Tan starts his day by hanging on the inversion table while his stomach is empty. The therapy relieves the pressure from his nerves and joints. He eats seven meals a day, but only fills himself up to 70 percent capacity. Breakfast is oatmeal and egg; the  rest of the diet consists of  a cup of rice, lots of vegetables, and fish. He eschews processed carbohydrates on Tuesdays and goes meatless on Fridays. Occasionally, he’ll have his steak and wine.

“I have three to four meetings in the morning; have a working lunch with associates or prospects; more meetings in the afternoon. After work I play  basketball or go to the gym,” he said.

On his trainer, Tan commended, “Jonnel researches a lot and I get results.” Even Tan’s Hong Kong-based physiotherapist was amazed by  the dramatic progress of his  patient.

Cruz said that Tan was diligent. If his schedule allowed, the trainer would fly with Tan on some foreign trips. “When we were working out at the MGM Hotel in Las Vegas, the Americans were looking at us. Boss was serious,” said Cruz.

Said Tan, “I encourage the employees and my dad to exercise. It’s important to have a balance of the mental with the physical.”