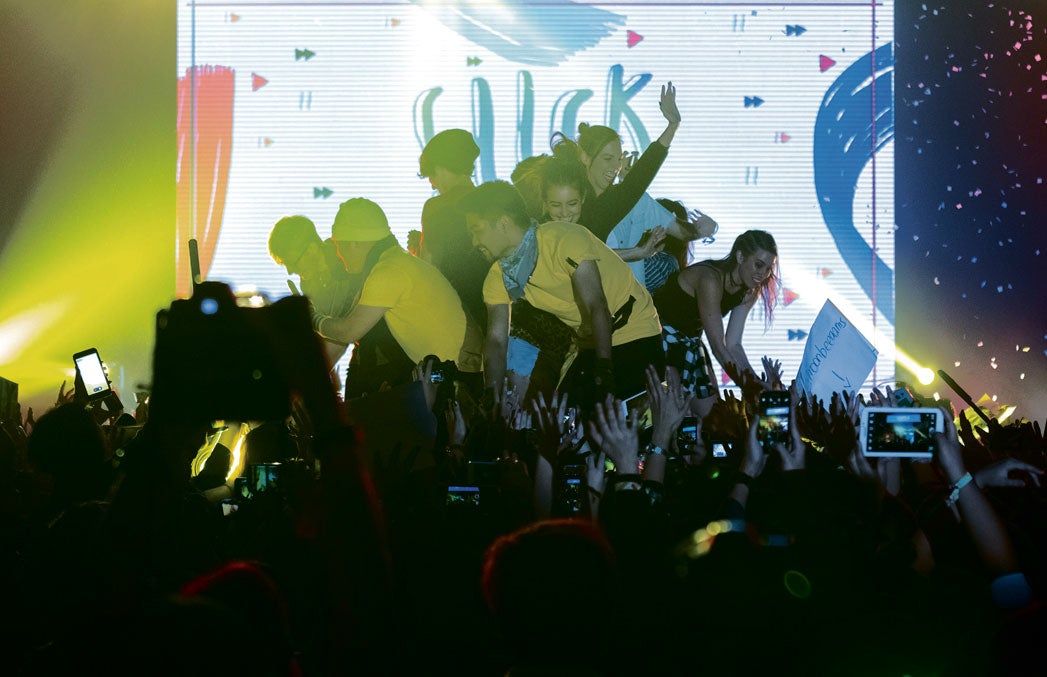 It was a gathering of screaming Internet multifandoms—mostly tweens and teenagers, some even accompanied by parents—as sought-after online stars were brought together for a huge social media event on Sunday.

Click Play: The Social Media Festival, an event by Karpos Multimedia, made it possible for Youtube personalities Ryan Higa and David Choi, Maze Runner actor Ki Hong Lee, all-girl singing group Cimorelli, and Viners Sam Golbach and Colby Brock (known collectively as Sam and Colby) to come together on the evening of Nov. 22 at the SMX Convention Center, Pasay City.

Higa, who was in the Philippines for the first time, said it was the “loudest” crowd he had so far.

“You guys are so loud… but in a good way. I can’t even hear a thing, I can’t even hear myself,” he said after shushing the screeching fans who huddled near the stage when he finally entered. He was the last to perform in the show.

“I don’t know why they put me last. They always put the boring guy last,” he said.

But he was anything but boring. Higa, who admitted he doesn’t dance or sing, performed his song “Nice Guys”—which has over 60 million views on YouTube—while doing impressions of famous singers, rappers and his “Skitzo” characters. This was followed by an EDM dance number with Best Crew (his friends Sean Fujiyoshi and Dereleek) along with co-headliner Choi, who were all in yellow bumble bee-inspired costumes.

Performing before Higa, Choi, who returned to the Philippines after four years, serenaded the crowd with his original songs “All I Need,” “Missing Piece,” “Can’t Take This Away,” “That Girl,” and “This One’s For Me.”

In one of his songs, “By My Side,” he asked the audience who among them “wants to be in love” and called up one lucky fan and sang beside her. Fans started to wave their hands up in the air and sing along.

Lee, more popularly known as “that Asian guy in the Maze Runner franchise,” did not perform on stage. He, however, took out a selfie stick—a gift from a fan—and took a selfie with the crowd, and played a game called “Box of Lies” with one girl from the audience.

The Korean-American actor shared that he started his acting mainly on YouTube with filmmakers Wong Fu Productions; now he constantly updates his Snapchat, Instagram and Twitter accounts, but has taken some time off from Facebook.

“I never thought I’ll be in the Philippines and talk about my movies with my fans,” Lee said during the Q and A portion. “We’ll start shooting for [the next] Maze Runner [movie] next year.”

Aside from the Asian artists, the California-born Cimorelli sisters had the audience up on their feet when they opened their segment with their song “Hearts On Fire,” followed by their other originals “Fall Back,” “Made in America,” “You’re Worth It,” “Renegade,” “That Girl Should Be Me,” and a cover of Ariana Grande’s “Problem.”

The sister act composed of Dani, Lisa, Christina, Amy, Kath and Lauren Cimorelli, then chose three girls from the audience for a game of blindfolded makeover, and later talked about their upcoming album and their huge family. Some fans could be heard shouting “Adopt me!” at the girls.

Kansas boys Sam and Colby, who kicked off the show, not only made the crowd go wild with their cheeky dance antics, but also impressed the audience with their not-so-Filipino accent in the two-part charades game and their enthusiasm during the eating-balut segment.

When asked what their favorite Filipino word was, Brock said, “dalandan;” the duo also tried other Pinoy food like mangga’t bagoong (green mangoes and shrimp paste) and kwek-kwek.

Was it a successful social media festival? Besides having several hashtags trending before and after Click Play, the number of people from the crowd taking selfies and photos and recording videos of the show out in front hardly gave the audience at the back a good view. Nonetheless, it was worth the experience for fans to see their idols up close, and to revel in digital trends as an avenue for fun, interaction and the exchange of ideas.