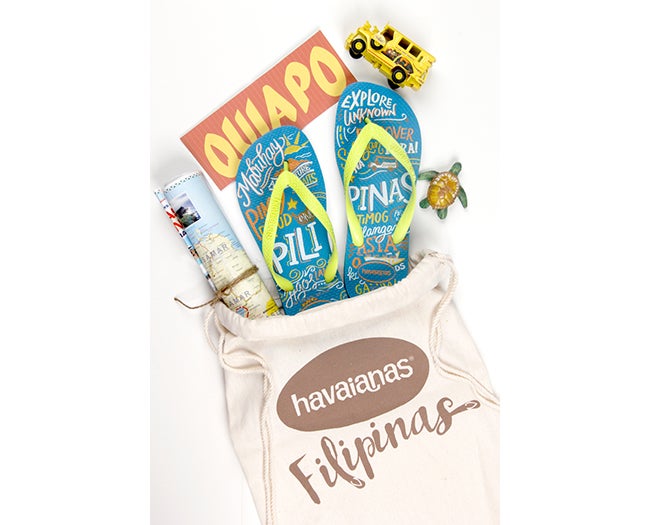 Everyone’s beloved flip-flop brand Havaianas has long been a staple in the Filipino wardrobe, so it was only natural for the brand to incorporate homegrown designs into their lineup.

Their first ever collaboration with a Filipino artist was with Dan Matutina for a commemorative Make Your Own Havaianas pair in 2013. Last year, the Brazilian brand also tapped designer Francis Libiran to design pairs inspired by Filipino festivals and symbols.

This year, team Havaianas enlists the talents of young artists Alessa Lanot (Life After Breakfast), Abbey Sy, and Patrick Cabral to bring a colorful and youthful interpretation of the things near and dear to Pinoys: travel, food, and play.

It was fitting that Alessa took on “Lasap,” a black-sole/metallic bronze strap pair emblazoned with her trademark dip pen doodles featuring yummy Filipino treats. Apart from holding art workshops and design, Alessa is also a restaurateur (Pino, Pipino, Hillside, Pi). “This was a project almost one year in the making. We were approached in February by Havaianas, and they gave us the freedom to create our designs. It’s always been my goal to promote Filipino cuisine in our restaurants so I was thrilled to incorporate this in my design,” says Alessa. 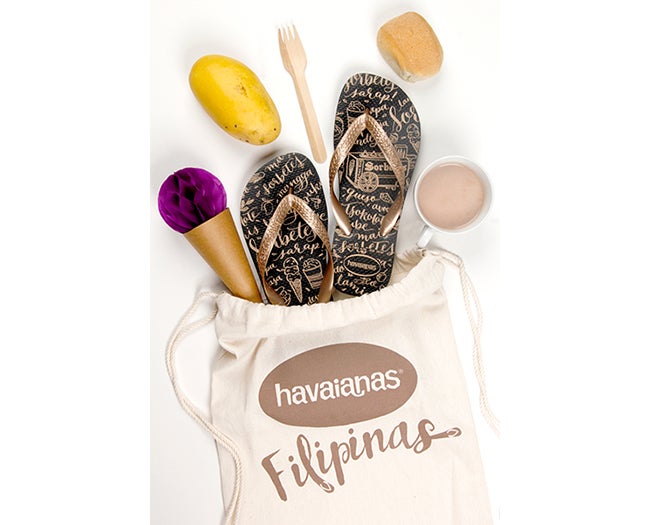 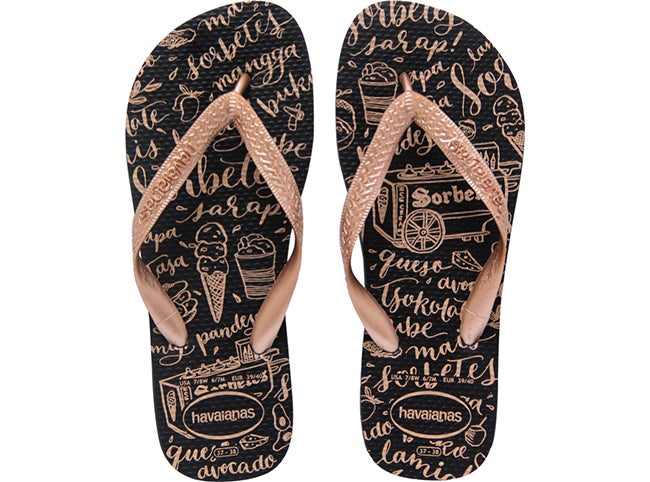 Abbey Sy, at the young age of 22, has slowly and steadily become a household name when it comes to lettering. She recently released a book called “The ABC’s of Lettering,” and the travel junkie was more than eager to do “Lakbay,” a bright neon pair that pays homage to wandering souls. “I made several studies for the design, like a vinta, but all of the designs were really travel-related,” says Abbey. 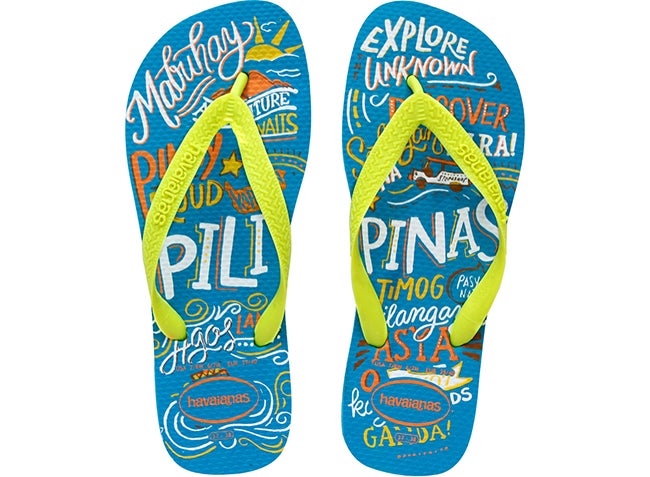 For graphic designer Patrick Cabral, the opportunity to design “Laro” for Havaianas had a special meaning for him. “My design idol Adhemas Batista has been designing for Havaianas for a long time. To be able to design for the same brand that he designed for is incredible.” Of the Filipino games listed on the fluorescent orange and gray pair, one game holds significance for Cabral. “I love Bato Bato Pick because I still play it until now,” says Cabral. “Delivery boys are not allowed to go up our floor in our apartment, so every time my wife and I have something delivered, we play Bato Bato Pick to see who would go down to get it.” 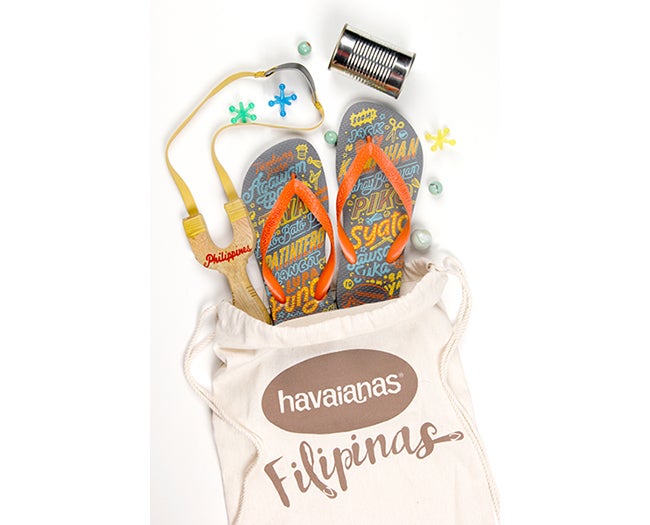 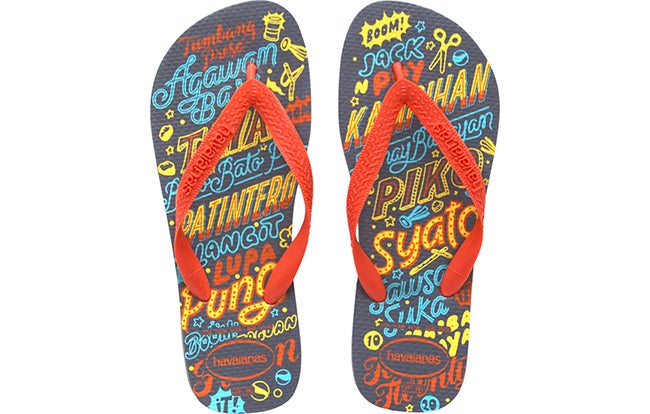 Just like most Pinoys, the three artists are longtime users of the brand. “I got my first pair in high school and I would need one pair a year during college because that was all I wore in school,” says Alessa. For Abbey, her first pair was a pretty pink and paisley pair that she bought with gift cards given to her on her 18th birthday, while Patrick’s first pair was a gray-soled pair, which he found fitting because the pair he designed also uses the same gray shade.

According to Anne Arcenas-Gonzalez, Managing Director of Havaianas, the three were a perfect fit for the brand because of their youthful appeal. “At Havaianas, we’re always pushing ourselves; we don’t want to repeat ourselves, so it was important for us to do something relevant that was young and light, which is really the Havaianas DNA,” she says.

“We wanted nostalgia and we wanted to tie it up with the current everyday digital lifestyle of social media. When you look at how people behave online, they usually post about food, travel, and lifestyle, like fitness. We translated that into what is relevant in terms of Filipino culture: lakbay, lasap, and laro, which symbolized movement.”

The brand has been around for over a decade and they still come up with fun and fresh ideas that speak to both longtime fans and newcomers to the brand. “It’s definitely fulfilling and still exciting. I think that’s the best part about it, there’s always something we can do better or different and the market is always changing,” says Gonzalez.

She adds, “I always say that we never invented slippers, it’s always been a basic shape of footwear that was already familiar to Filipinos. I think what Havaianas was able to do was really make it symbolic; it allowed people to relate to it and make their own stories with it, like how when they travel, they always bring Havaianas with them—it becomes an association with a memory and experience.”

Experience the ultimate Pinoy adventure with #HavaianasFilipinas2015 limited edition pairs Lakbay, Lasap, and Laro (P1,195 ea.). Each pair comes in a drawstring knapsack, ready for gifting. The limited edition collection will be available beginning December at select Havaianas retailers. To know more about the collection and the creative talents behind the designs, follow Havaianas Philippines on Facebook (HavaianasPhilippines) and on Twitter/Instagram: @havaianasphils.