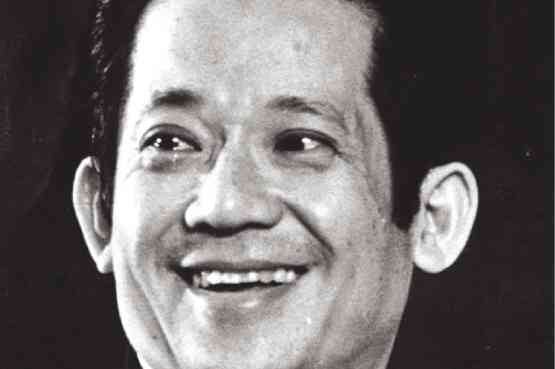 Millennials who have no memory of martial law and the late Sen. Benigno “Ninoy” Aquino Jr. now have a book that might well be written with them in mind.

READ: Why Ninoy still matters 30 years after he was murdered by the Marcos dictatorship / Ninoy Aquino remains ‘shining example’

“We have to say how (martial law) really was so that most people trying to change history will have a harder time,” President Benigno Aquino III’s sister, Pinky Aquino-Abellada, said of “The Aquino Legacy: An Enduring Narrative,” at its launch on Friday.

The book, launched on the eve of what could have been the late senator’s 83rd birthday on Nov. 27, is a collection of historical accounts and commentaries based on recent interviews with personalities who worked to bring down martial law, by authors Elfren Sicangco Cruz and Neni Sta. Romana Cruz.

The Cruz couple are friends “sa hirap at ginhawa (through thick and thin),” President Aquino said at the launch, adding that the book was an addition “to the body of knowledge (on martial law) available at this point.”

Indeed, the book’s release seems to address the recent proliferation of websites and social media posts extolling the virtues of martial law and describing the era as one of prosperity and economic growth.

Most of the posts were from young netizens who could not have known firsthand about the Marcos years nor experienced them personally.

Noting the existence of historical accounts from the Left that document their struggles and triumphs during martial law, Mr. Aquino said the book offers “an alternative account, one that is inextricable from the life of our family.”

The authors can be considered insiders in President Cory Aquino’s government, with Elfren Cruz heading the Presidential Management Staff. His wife, Sta. Romana-Cruz, wrote articles critical of the Marcoses during martial law.

Both were active in the street protests that exploded after the assassination of Senator Aquino on Aug. 21, 1983, that culminated in the Marcoses’ ouster during the Edsa People Power Revolution.

The book wants to put things in perspective, the authors said.

Not an easy struggle

“We want to present Ninoy and Cory as figures that helped in the struggle (but) we don’t want to deify them,” Sta. Romana-Cruz said. “We’re not saying they’re flawless.”

It was also important that millennials know that the Edsa People Power Revolution “was not an easy struggle,” she added.

“It’s unfair to say that (young people) have forgotten it,” she said. “Often, they don’t know about this history because they never learned about it.”

Added Neni: “It was not just a four-day march; it was really several years in the making.”

Included in the book is a first-hand account of the noise barrage on the eve of the April 7, 1978, elections, when Senator Aquino ran against former First Lady Imelda Marcos. In an attempt to silence the “noise barrage” staged by Aquino supporters, Marcos sent out soldiers in tanks to patrol the streets, a common enough sight during the martial law years.

Predictably, the election results were a sweep for the Marcoses’ Kilusang Bagong Lipunan party.

Many years later, after the swearing in of Mrs. Aquino as the 11th and first woman President of the Philippines, the idea for the book germinated.

It served as a convenient way to correct or clarify some popular quotes attributed to the late President.

Beyond politics, the lighter side of the Cory Aquino presidency was also tackled, with a chapter devoted to youngest daughter Kris Aquino, the self-described “Oprah of the Philippines.”

“Who has a Kris Aquino business empire that encompasses product endorsements, movie and concert production, (and) entrepreneurial ventures? Can a Ninoy Aquino clone truly steer clear of politics in the future?” the book asks in a six-page treatment on the show biz Aquino titled “The Sui Generis Kris Aquino, 44.”

The interview quoted the youngest Aquino sister as saying that she plans to leave the entertainment industry at 45, in deference to her mother’s advice: “Please know when to walk away.”

It took the authors a year to write the book, as they interviewed the Aquino siblings (President Aquino and sisters Kris Aquino, Maria Elena Aquino-Cruz, Aurora Corazon Aquino-Abellada, Victoria Elisa Aquino-Dee) and the Aquino grandchildren, from the eldest Jiggy Aquino-Cruz to the youngest, Bimby Aquino-Yap.

The family was very accommodating during the whole writing process, Sta. Romana-Cruz said. “They never censored, never asked to look at the manuscript.”

But the need to conduct more interviews or revise several chapters delayed the book’s release, which was originally targeted to coincide with the death anniversary of either President Cory or Senator Aquino.

“We decided, let’s not hurry,” said Cruz. “The next appropriate date would be Ninoy’s birthday.”

Looking for another Ninoy

Documenting the years immediately before and after martial law, the book ends with the authors’ reflection on whether the Philippines will ever have “another Ninoy Aquino,” and suggests otherwise:

“When Ninoy Aquino said that the Filipino is worth dying for, surely he saw each Filipino as equal to one another. Three decades after his death, the Filipino people are still looking for another Ninoy,” the book said.