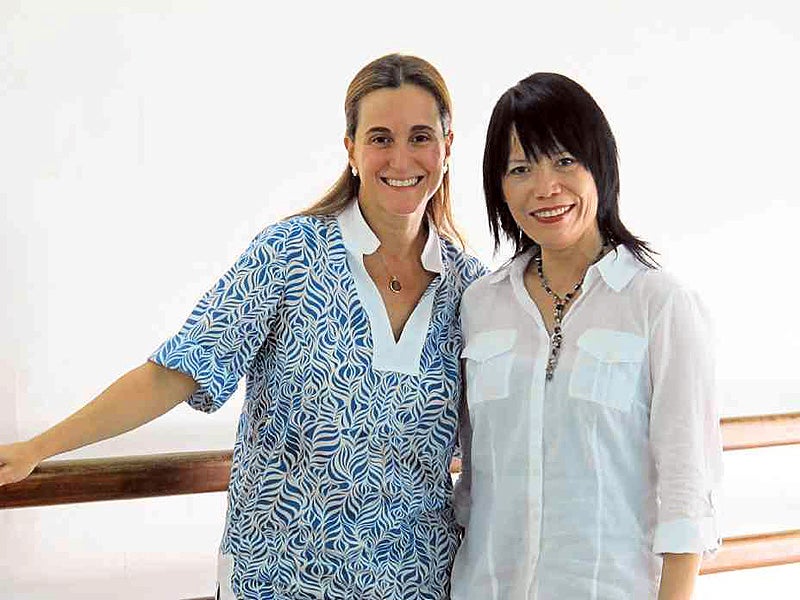 Guest teacher Hazel Sabas-Gower (right), whose environmental piece ‘Green’ will be staged tonight, begins by creating the movement, even before adding on the music, with Sofia Zobel-Elizalde (left), Steps managing director.

‘Can your dance stand alone?’

Think of any kind of dance, and you’ll play some music in your head. It could be heavy bass beats for hiphop; smooth, suave notes for jazz; or a light and dreamy tune for ballet.

That’s how internationally renowned choreographer and Steps Dance Studio summer dance workshop guest teacher Hazel Sabas-Gower starts teaching a piece – she plays the music in her head. But in her head is where the melody stays, at least for a couple of sessions, Gower creates movement with her dancers without letting them hear what they’re supposed to be dancing to.

“Strip your dance of music, costumes, lighting, sets. Can your dance stand alone?” she says.

It’s a philosophy she’s imbibed in her numerous compositions, and her latest work, “Green,” is further testament to this philosophy. Performed by the prestigious Central Pennsylvania Youth Ballet (CPYB) earlier this year, “Green” is a 10-minute ballet piece inspired by the environment.

The elements (Earth, Water, Air and Fire) divide the dance into four parts, with Air as the highlight. Gower is staging it tonight as part of Steps’ 17th anniversary concert, 6 p.m., at the Cultural Center of the Philippines.

“It’s a very challenging partnering piece,” says Gower. “The pas de deux, the lifts, these are the climax of the piece.” To emphasize the simplicity of nature, dancers perform in plain black leotards and pink tights.

The inspiration is Gower’s tribute to her mother, a strong advocate of environmental conservation. The music is a tribute to her father and their common love of music.

Gower chose Johann Sebastian Bach as accompaniment to her dance, played by Richard Galliano on a rather unconventional instrument, especially for ballet – the accordion.

“You would think the accordion is loud, but it isn’t,” says Gower, who edits her own music. “Richard Galliano played his accordion like he was playing a violin.” Gower chose Galliano’s work because her father, too, played the accordion.

For tonight’s staging, Gower worked with eight Steps students and three professional male dancers from Ballet Manila, who have the height necessary to perform the pas de deux and lifts. The piece is also longer by 13 minutes, an adjustment Gower made to accommodate Steps managing director Sofia Zobel-Elizalde’s request to add more of her students.

Elizalde and Gower are longtime friends who reconnected last year. When Elizalde heard of Gower’s accomplishments abroad, she jumped at the chance and invited her to teach for the summer. “It’s hard to find choreographers who do this kind of work: neoclassic, sort of classical ballet, but a little bit modern,” says Elizalde. “I find that Hazel’s work is so sophisticated that it makes the students look more professional.”

First and foremost a dancer, Gower received her ballet training at a young age in the Philippines. Her first formal teacher was Felicita “Tita” Radaic, but it was former Ballet Philippines artistic director Alice Reyes who made Gower realize her talent at choreography.

She was around 18 then, but it wasn’t until after finishing a two-year diploma degree on Creative and Performing Arts at the University of the Philippines in Diliman that she decided to pursue choreography seriously. At age 26, even though she was dancing lead roles in different shows, Gower applied and was accepted into the New York University’s (NYU)Tisch School of Arts to earn her master’s degree. Her diploma degree at UP was considered equivalent to a bachelor’s when NYU saw her extensive background in dance.

“The program was so rigorous that you had to have a full ballet class and a full modern class every single day, back-to-back,” says Gower. “Every time there was an opportunity to choreograph, I would grab my classmate and say, ‘Let’s do this piece.’ I was literally living in the studio.”

“Green” came at a time when Gower was looking to create a piece she could leave behind as her “legacy.” The piece isn’t political, since that’s never been Gower’s style; it’s more of a quiet, spiritual composition that “tugs at something in you.”

“I want it to make an impact on my family, the students I’m going to work with,” she says. “I want to be known as someone who left something in choreography that would make a difference.”

It may be too soon to say exactly what difference the dance has made, but it’s certainly made an impact on the 50-year-old choreographer and her career – like a good luck charm. “You know how things just come to you? That’s what happened with ‘Green’; after it, projects kept coming in.”

But the praise Gower considers the most rewarding for her work came in the form of tears from a woman who saw the dance at an informal showing at CPYB.

“When you see someone tear up, it could be tears of joy, or just a memory. For me, that’s enough.”

“Green” will be staged at the CCP tonight (Sunday), 6 p.m., as part of Steps’ 17th anniversary concert.