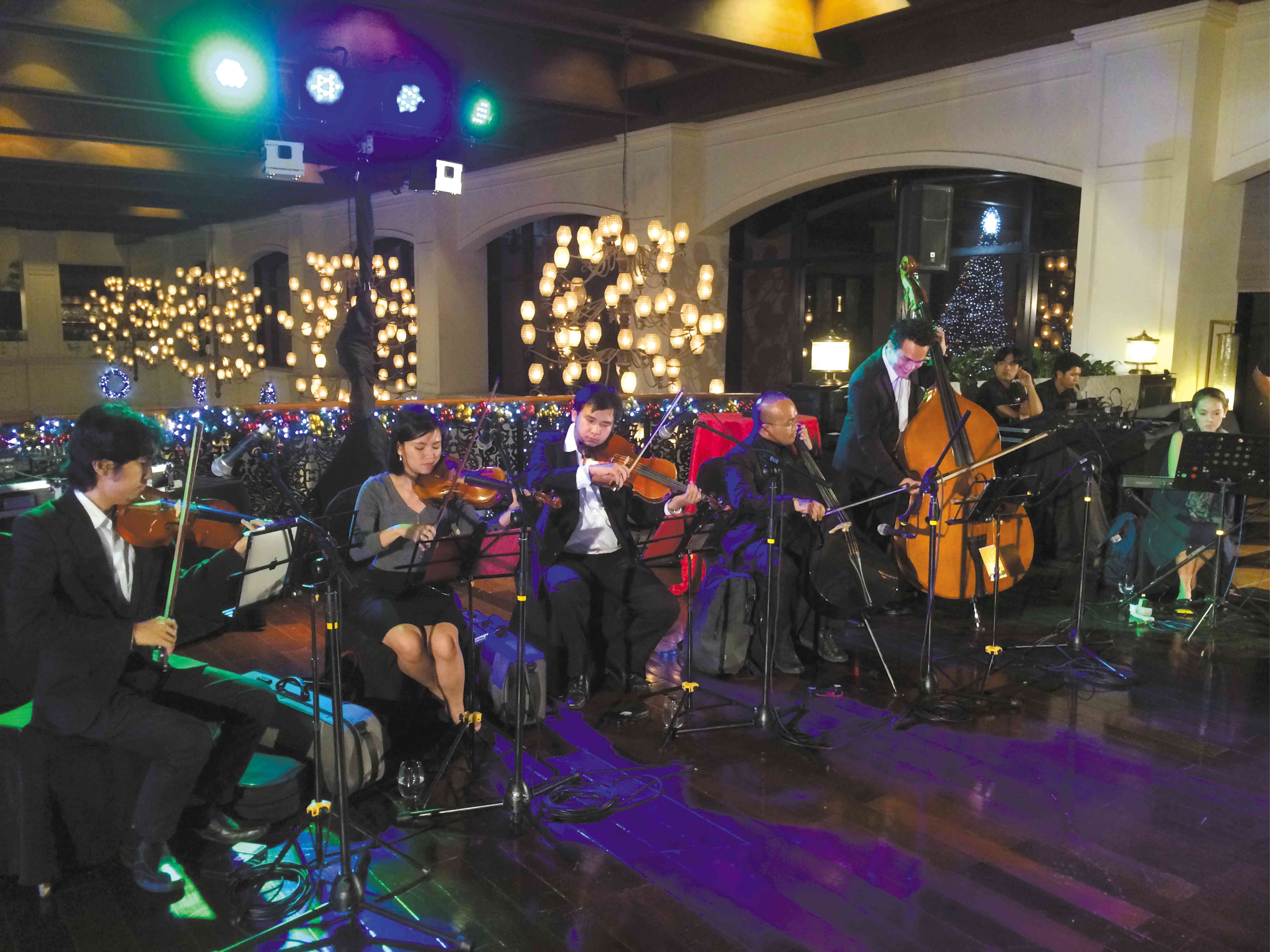 Sofitel Philippine Plaza officially welcomed the holiday season by lighting up its 30-foot Christmas tree during a recent reception held at the hotel’s Le Bar area.

Next to perform was the six-piece Manila String Machine, which will expand into a 15-string ensemble for Sofitel’s Christmas Eve and New Year’s Eve celebrations.

“There will also be a seven-piece jazz band, Bras Pas Pas Pas,” said food and beverage director Damien Marchenay. He noted that, for the first time, Sofitel will hold its New Year’s Eve party at the Harbor Garden Tent—which will recreate the animated setting of the Carnival de Venezia (Carnival of Venice), an annual festival held in Italy that showcases elaborate costumes and masks.

The hotel will provide the masks, but those who come in their own costumes will win prizes.

There’s a lot to look forward to at the Christmas Eve/Day buffet menu at Spiral, the hotel’s popular restaurant. At the Christmas tree-lighting event, guests enjoyed a sample of the holiday food that included an artisan cheese platter (selection of 30 farm cheeses from Europe); cold cooked meat such as Parma ham, jamon Iberico and salami; French takes on salmon, lamb, snails, sweet potato, mushrooms and assorted vegetables for the main course, among dozens of other dishes.

Spiral is known for serving the widest buffet selection in the city; its Christmas Eve/Day menu is four pages long.

Here’s a glimpse of the rest of Sofitel’s holiday specials:

Visiting families are in for a treat as Santa Claus stops over on Dec. 24, 7 p.m., and on Christmas Day Brunch at 12:30 p.m. There will be holiday-inspired animations of balloon-twisting showcase and a Rudolph face-painting corner.

For Christmas Eve and Christmas Dinner, there will be a live cultural show featuring Philippine folk dances.

DJ Skratchmark will play records to usher in the New Year’s Eve countdown.

New Year at Spiral will have seasonal specialties added to its 21 dining ateliers. A countdown of Sofitel’s 2015 moments and milestones will be punctuated by the annual fireworks display.

Children will be given paintbrushes to express their farewell messages to 2015 and welcome notes to 2016 at Spiral’s New Year Canvas while enjoying New Year’s Day Brunch.

New Year’s Eve Dinner is available from 7 to 11 p.m. with cocktails and music from DJ Abdel Aziz.