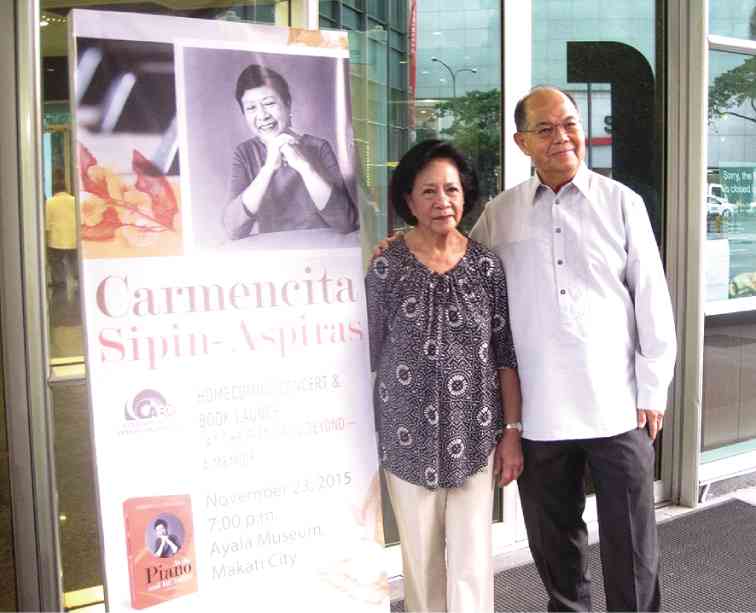 The “Grand dame of elegant pianism” (critic Antonio Hila’s description of her) is home again.

She has just performed Schumann’s epic “Fantasy in C,” conducted a master class for Filipino piano majors at Steinway Boutique, and launched an equally poised and elegant memoir, “At the Piano and Beyond.”

Truly, Carmencita “Chita” Sipin Aspiras has much to be thankful for in her septuagenarian years.

Diet-wise, the slim pianist has been a pescetarian, a fish-eating vegetarian, for the past four years. She walks in her Fremont neighborhood in San Francisco, California, an hour in the morning, weather permitting. Otherwise, she is on the exercise bike.

She is coy about her age, saying, “When I am asked how old I am, I say that age is just a number. It is what I have done in my many years of blessed life that is more meaningful.”

Her attitude is to “take life as it comes with gratitude. When I’m with my close friends who are also my age, we joke and laugh a lot. I thank God for my good health.”

She was born in the Philippines, raised in Pangasinan, and at age 11 became the youngest student enrolled at the University of the Philippines’ Conservatory of Music under Juan Banez.

When Banez left for the United States, Chita moved to the Philippine Women’s University (PWU) to study with Lucrecia Kasilag, then dean of the PWU College of Music.

By 17, Chita had graduated with honors and was hailed as one of the most outstanding talents in the country. She was granted a scholarship to the prestigious Vienna Academy of Music in Austria where she earned her Concert Artist’s Diploma.

However, it wasn’t all a charmed life. Her book opens with a dramatic scene set in World War II when their house came under bombardment.

The memoirist wrote: “My younger sister Purita and I were toddlers when a shrapnel zipped through the window of our house in San Jacinto, Pangasinan, hit the ‘belly’ of the family’s upright piano, cracked the wood panel underneath the keyboard, ricocheted before it landed under our sofa.

“The whole family was huddled in the safety of our underground air-raid shelter behind our house. Miraculously, the piano’s ‘innards’ were untouched. It must have been its fate for the shrapnel’s travel route and impact on the piano defined what became my relationship with the instrument.

“My Dad kept the shrapnel, a chunky, foot-long piece of heavy steel in his desk drawer, only putting it out like a historical relic to show visitors. The crack on the piano’s belly was never repaired; it was as historically valuable as the shrapnel.”

Chita and violin prodigy Carmencita Lozada, she of the passionate and virtuosic playing, were on the same scholarship from the Music Foundation of the Philippines. For years they were roommates and schoolmates. The Filipino community in Europe took to calling them Carmencita Tangkad (tall for Chita) and Carmencita Liit (short for Lozada).

She misses Ms Liit so much, especially their concerts together. “I miss our collaboration that evolved through the years into a seasoned and mature team playing. Carmencita and I were a duo since our teen years until distance made playing together difficult. She was living in Germany and I in the Netherlands … then she contracted lung cancer.”

When she looks back on her student days in Vienna, Chita wishes “I had practiced less and spent time on other interests like photography and design. Practicing the piano consumed me.”

But there wasn’t much choice, with demanding and legendary teachers like Bruno Seidlhofer (teacher also of Martha Argerich, Daniel Baremboim, to name a few), Grete Hinterhofer, Richard Hauser and Magda Tagliaferro.

The discipline is ingrained. Whether she has a coming engagement or not, Chita practices three to four hours a day.

She says: “It is my life. Nervousness is part of public performance. I feel nervous that a mishap might occur but more so, I feel nervous because what I am about to do is very significant—playing the magnificent music of the masters. It is a moment accorded the privileged few. To quiet my nerves, I take deep-breathing exercises and pray.”

To prodigies and young pianists, her message is simple: “Take music study step by step, playing music suited to his/her maturity and playing level. The notes are just dots that hold the meaning and beauty of the music, which take time and understanding. If the young talent can’t live without music and has the perseverance, patience and discipline to pursue it, I should say go for it. But a word of warning: If your aim is to be the best, there is no such thing in music. But there is a playing that gives spiritual joy to you and your listeners, a joy that is akin to being close to God. Aim for that and the rest will follow.”

Of the music masters, the composer who has presented the most challenges to her is Mozart.

“The older I get, the more difficult playing his music becomes,” she says. “I have to sculpt each phrase, each ‘running’ passage with all the elegance and grace I can give and at the same time making it flow naturally. Its simplicity is deceiving. There is behind it a depth of emotion that must come to the fore, but at the same time I have to keep in mind that Mozart lived during the Austro-Hungarian monarchy era when aristocratic elegance was prevalent.”

Asked what pushed her to finally sit and write down her memories of a bygone era (Europe in the ’50s, especially when brown-skinned Asians were a rare sight in the continent), she answers that Armando Baltazar, founder of the Manila Chamber Orchestra Foundation, pushed her into it after her Manila concert in 2011.

Another Armando, her husband, suggested that she begin to write her ideas down.

She continues: “It took me two years to write the book. While in Vienna, I kept diaries primarily to help me relate my experiences in my letters to my family back home. The diaries proved very helpful. Pompeii, an Italian town buried in lava after the eruption of Vesuvius volcano in 79 AD, whose excavation is still ongoing, intrigues me. I liken the excavation of the ancient city to what I continually do: ‘dig out’ whatever meaning and beauty I can shed light on in the music at hand for me and the listener to enjoy.”

She ends the interview with a gracious, continental gesture: “I thank you, too, for making me feel precious.”

Hardbound copies of Aspiras’ autobiography are available at the Ayala Museum Shop.