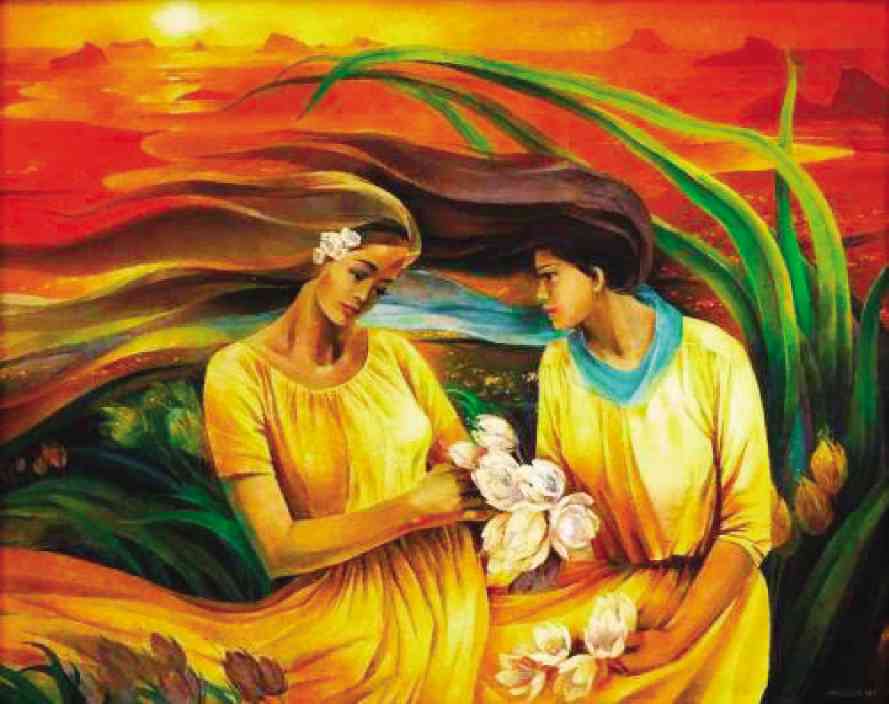 “SEA of Gold,” by Cesar Legaspi

Key works by Legaspi, Ventura, BenCab, ‘Botong,’ Olazo, Dalena to be auctioned off

RONALD Ventura’s large mixed-media painting of the Vitruvian man, otherwise a Western icon very familiar to the world because of Leonardo Da Vinci’s famous drawing of it, is the centerpiece of contemporary works to be bid out during León Gallery during the Kingly Treasures Auction on Dec. 5.

To be auctioned off too are key heritage furniture and objects d’ art. “And perhaps I shouldn’t fail to mention that in the history of León Gallery, the finest piece of furniture, the Rolls-Royce of all cabinets, the Tinio-Gabaldon Cabinet is also in this sale,” said Ponce de León.

A most impressive work, Ventura’s 2001 mixed-media “In Memorial,” which features the Vitruvian man, has starting bid of a staggering P7 million.

Another important work is the 2003 acrylic-on-canvas “Sabel” by Benedicto “BenCab” Cabrera, who has seven other works up for bid in the auction. It will be auctioned off starting at P2.2 million. His other work of the same name, signed and dated in 1997, has a starting price of P1.8 million.

A very beautiful work is “Sea of Gold” by National Artist Cesar Legaspi, a 1990 36” x 48” oil-on-canvas. It is described in the auction catalogue: “Serpentine lines and transparent colors hold together this dreamlike composition of two women holding flowers. Of note are the strong emphases in rhythmic and expressive, linear to wavy patterns. It is also notable for both the sinuous and graceful lines of the figure drawing and the soft to dark to light rendition of the dreamy background landscape setting.”

The work, which comes with a certificate of authenticity from Dennis Legaspi, is among Legaspi’s last works. Critic-historian Alice Guillermo has written, “The power and fascinating quality of Legaspi’s later works strike from the feeling that they strike deep into subconscious reserves of energy and imagination.”

Aside from BenCab and Legaspi, among the National Artists featured in the auction are Ang Kiukok, José Joya, J. Elizalde Navarro, Carlos “Botong” Francisco, Federico Aguilar Alcuaz and Vicente Manansala.

Ang’s 1981 oil-on-canvas “Pieta,” which depicts the deposition of Christ or the scene where Christ is being taken down from the cross after his crucifixion, has a starting price of P1.2 million.

Meanwhile, Navarro’s oil-on-board “The Red Cross I” will be auctioned off starting at P120,000. The painting is a prime example of the artist’s works that combine strong colors with geometric elements against a backdrop of strong vivid hues.

Joya’s 1985 acrylic-on-canvas “Torogan,” considered to be the artist’s major work during the 1980s, and Manansala’s 1971 oil-on-canvas-board “Mother and Child” each has a starting bid of P2 million.

A very important work is Olazo’s 1982 oil-on-canvas “Diaphanous B-LXXVII,” which has a starting price of P2 million.

Filipino modern artist and Paris expatriate Nena Saguil’s 1965 ink-on-paper “Spheres,” which depicts her own interpretation of the cosmos, will be auctioned off starting at P140,000.

For catalog, visit www.leon-gallery.com or e-mail