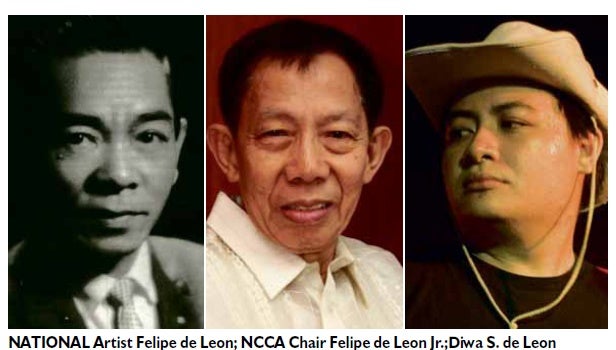 The music of National Artist De Leon represents a period of intense nationalism, when the identity of the Filipino had to be defined and his dignity asserted. Felipe Sr. gave musical forms inherited from Europe such as art songs, habaneras, Christmas carols a Filipino content. He established a classical tradition based on folk musical forms such as the kundiman.

In the music of Felipe Jr. this strain of nationalism continues. But having witnessed the political repression and abuses that characterized the period before and during martial law, he became active in the movement particularly through his music. His long career as a humanities professor also developed in him a more cosmopolitan perspective.

Diwa Felipe III grew up in a period when composers already had access to the inexhaustible wealth of indigenous musical concepts and forms that our diverse ethnicities offered. He utilized the instrumental and musical resources of the T’boli and integrated them with the current youth’s fascination with Afro-American rhythms and world music ideas.