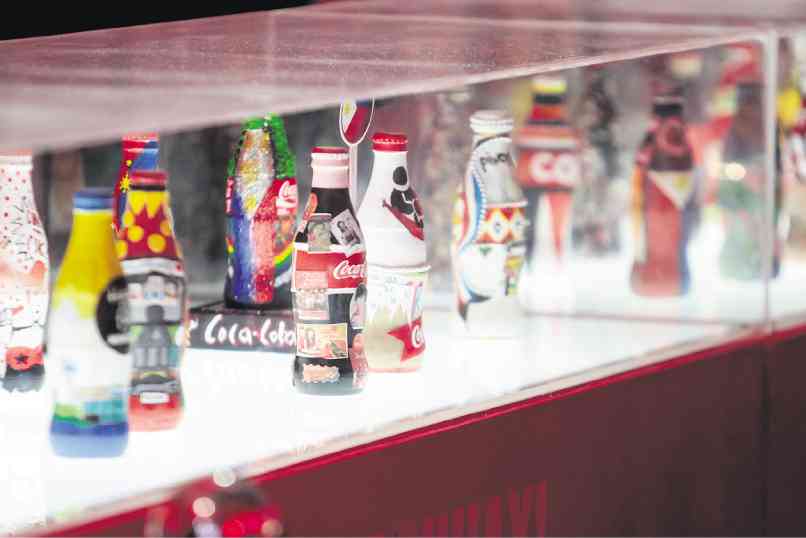 IF COKE were to tinker with its DNA, which would cause a bigger uproar among consumers—changing its taste or its bottle?

The question made historian Ted Ryan pause. Ryan, the Coca-Cola Company director of heritage communications, was in the Philippines recently for the opening of the two-day Coca-Cola Bottle Art Tour at Bonifacio Global City.

The traveling tour, which ends in 2016, highlights Coke’s yearlong celebration of the centennial of the iconic Coke bottle.

Apart from showcasing vintage ads and artworks revolving around Coke by such famous artists as Andy Warhol, Peter Blake, Haddon Sundblom and Norman Rockwell as well as lesser known talents like Kate Brinkworth and Pakpoom Silaphan, the exhibit provided visitors with an interactive experience that engaged the five senses, including the sense of smell.

Before they were ushered into the main hall where the artworks and Coke memorabilia were displayed, people were reintroduced to Coke through a five-minute show that allowed them to smell the soft drink’s delightful fizz.

Their curiosity was rewarded, as guests were each given an ice-cold bottle of Coke to drink before they began viewing the collection.

“That’s an interesting question,” said Ryan when asked to choose between Coke’s taste and its bottle. “I’d still say changing the formula. The bottle has changed subtly through the years, but you can still recognize it. But if you change what’s inside the bottle, you’ve broken a promise.”

Ryan drew from Coke’s experience in 1985 when its then CEO, to stay ahead of the competition, came up with “New Coke,” a reformulated version of the original that tasted much like its rival soft drink.

Although it was still sold side by side with “Classic Coke,” the company, which by then had already diversified into other products like bottled water and sports drinks, was swamped with complaints from irate Coke loyalists.

People at Coke thought they owned the brand, but they were wrong. They realized that the public now “owns it,” said Ryan.

There have been plenty of instances during which they were confronted by such a realization. An old woman who caught up with a Coke executive summed it up: “You took away my memories.”

Ryan pointed out that “New Coke hasn’t been in the market for 20 years now,” adding that when the person responsible for launching it passed away, it was removed from the market.

But despite subtle changes and the introduction of Coke in cans, its bottle, whose curvy shape has become the goal of every wannabe beauty queen, is still central to its identity.

Raymond Loewy, a famous American industrial designer, once described the Coke bottle as a “perfect form of masculine and feminine.” He also called it an ideal “fluid wrapper.”

Ryan said, “Loewy didn’t design the Coke bottle. But he observed that when its contents are cold, the bottle fits well in the hand and engages the five senses when you drink from it.”

Before Coke—then a fledgling company that had yet to venture outside the United States—tapped the Root Glass Company in Indiana to design a bottle for its lone product, the soft drink was sold in generic-looking bottles.

The embossed, straight-sided bottle was open to copying. But instead of saying Coca-Cola, imitators would come out with something like Coca-Nola. That was when the company decided to create its own bottle and have it patented.

“Coke is now sold in 207 countries,” said Ryan. “Even without the brand name, its bottle has become one of the most recognizable shapes in the world.”

“I never end a presentation or interview with journalists without being asked that,” said Ryan. “It’s an urban legend, but the myth has been there since the beginning.”

In order to satisfy its critics, the company even had its product analyzed in almost every state in America during its early years. It came out “clean” after each test.

Ryan asked, “Could you sell something for a nickel (five cents) if it had cocaine? The reason behind its name also had to do with marketing. Frank Robinson, the guy who wrote it, liked the idea of how the two Cs [in Coca] looked and stood out in advertising.”

It was only in 1955 when Coke started to raise its price. To give consumers more choices, it also began introducing other products like Sprite, Fanta and Tab, the precursor of Diet Coke, in the late ’50s and early ’60s.

But the secret to Coke’s longevity and global appeal doesn’t rely solely on its contents or its bottle.

Its critics may dismiss it as nothing but sugared water, but for it to expand globally and last this long, it must be doing something brilliantly.

“Coke’s secret formula has always been marketing and good management,” said Ryan. “Whenever we have both, the company grows. Whenever they’re not in synch, the company doesn’t grow as much.”