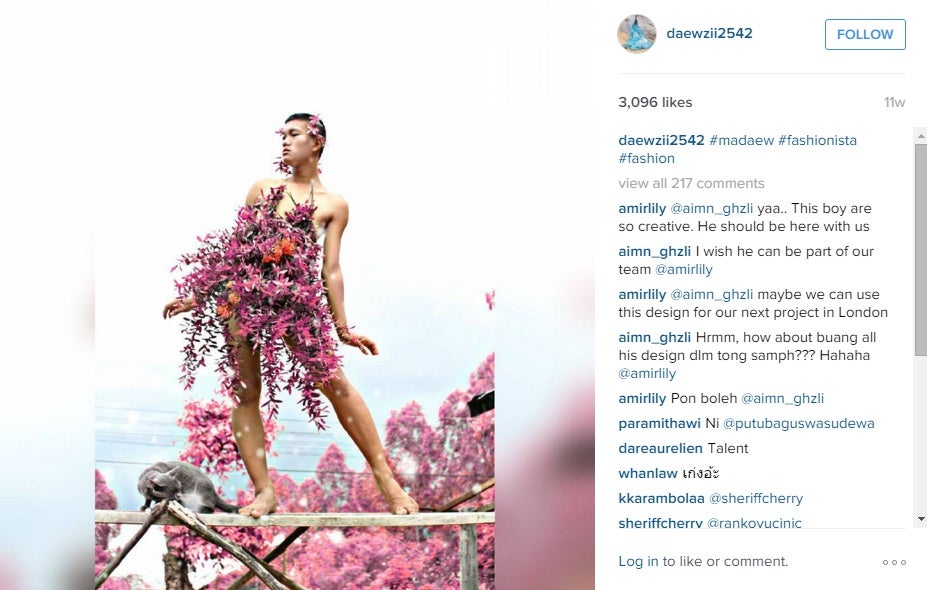 Apichet “Madeaw” Atilattana, the Khon Kaen teenager who became an Internet fashion sensation by dressing up artfully in his mom’s pots and pans, finally got to make his catwalk debut in Bangkok last Friday in a togs show at the Alliance Francaise that was part of Galleries Night.

As well as kitchen utensils, the kid from Isaan has shown his fans on Facebook and YouTube how it’s possible to look Vogue-level chic in just about anything that comes to hand. He’s put together outfits made from bamboo chicken cages, mosquito nets – you name it. Full respect to Jim Thompson and other bastions of the silk trade, but we’re just going to wear bubble-pack from now on.

Madeaw is nothing if not inspiring. For Friday’s show he gave a master class in inventive, often humorous and utterly bizarre couture straight off the farm. Bamboo steamers, banana leaves and hand-held fans not only found new leases on life but also seemed to be making a statement about a country sharply divided between the wealth and power of Bangkok and the rural majority that has traditionally served as its economic backbone.

“I want to show people in Bangkok that Isaan people can be creative,” Agence France-Presse quotes Madeaw as saying. “People in Bangkok should start thinking outside the box. They have this idea that people in Isaan are dirty and uneducated, but there are a lot who are successful.”

Well, not all of the city folk think they’re “dirty”, apart from the grime of an honest day’s toil in the rice fields, and we definitely want them to get the same education as everyone else, but, yeah, his point is taken.

Madaew is still in the throes of secondary education, attending Fang Wittayayon School, but he’s got the social-media smarts to be carving out a reputation in creative design. He’s amassed more than 200,000 followers on Facebook and Instagram in the eight months since he began posting his cool images dressed in his outlandish attire.
And he genuinely hopes his styling can in some way help bridge the social divide. “I want to transform things that are seen as having no value – useless things – into ones with value,” he says. “I had chicken cages at home with a hole in top big enough for my neck, so I put one on and it looked beautiful! The implication is that you can’t judge people by how they look.”