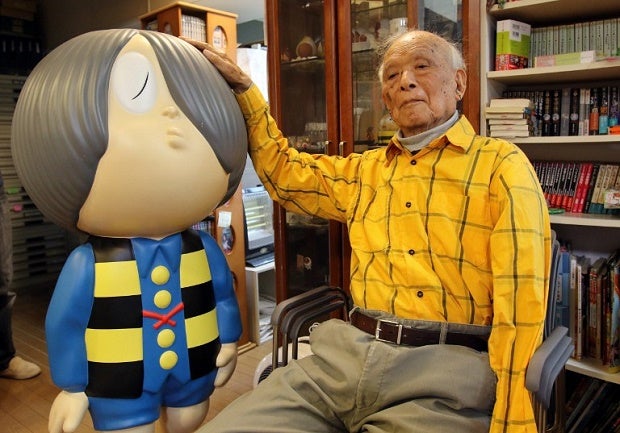 This picture taken on May 12, 2015 shows Japanese 93-year-old comic artist Shigeru Mizuki sitting next to his famous character "Kitaro" as he speaks to AFP at his studio in Tokyo. Mizuki died of multiple organ failure at a hospital in Tokyo on November 30, 2015. AFP PHOTO

TOKYO, Japan—Award-winning Japanese cartoonist Shigeru Mizuki, known for his comics of ghosts and monsters inspired by folklore and for his accounts of World War II horrors, died Monday at 93, his office said.

Mizuki, whose real name was Shigeru Mura, was hospitalized in early November after he collapsed in Tokyo, the office said on its website.

He underwent surgery but died Monday morning of multiple organ failure in hospital, it said.

The native of Tottori prefecture in western Japan began his career as a cartoonist after surviving World War II during which the conscripted Japanese soldier lost his left arm in a US air strike.

Mizuki had enjoyed widespread popularity for decades since the release of his “GeGeGe no Kitaro” comics—called manga in Japan—depicting battles between the hero monster Kitaro and rival spirits and ghosts.

His works also covered the horror of war based on his battlefield experiences in New Britain island, now part of Papua New Guinea, and the harsh treatment common soldiers received from their superior officers.

“You were never allowed to retreat (from) the front, you had to stay until you died,” he told AFP in an interview earlier this year.

Rank and file soldiers were treated “not as human beings, but were thought to be something less than horses.”

A museum dedicated to Mizuki opened in Sakaiminato city in Tottori in 2003 and residents named the city’s shopping district “Mizuki Shigeru Road.”

The area displays more than 100 statues of his cartoon characters and has attracted tourists and fans from across the country.

Mizuki received the Heritage Essential Award of the Angouleme International Comics Festival in France in 2009.