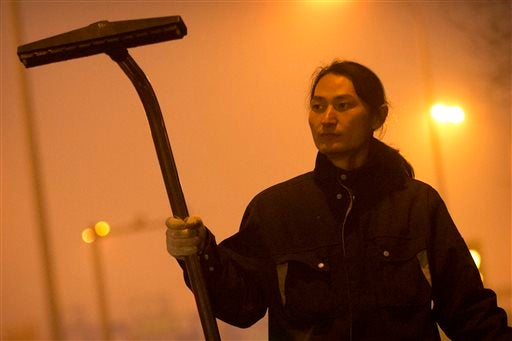 Chinese artist Wang Renzheng demonstrates the use of his industrial shop-vac alongside a highway in Beijing, Tuesday, Dec. 1, 2015. Wang spent 4 hours per day for 100 days vacuuming the Beijing air with an industrial shop-vac, then baked the accumulated dust and pollutants into a brick. (AP Photo/Mark Schiefelbein)

For four hours every day, for 100 days, Chinese artist Wang Renzheng held up the attachment of an industrial vacuum cleaner to suck in Beijing’s notoriously polluted air at various landmarks.

Passers-by were intrigued, inquiring if he was an air sanitation worker, or if he was taking air samples, or if he could be hired to do air sweeps of their apartments, Wang recalled.

The 34-year-old artist hopes the performance art — dubbed the Dust Project — can sharpen the public’s sense of China’s air quality.

“Have you ever thought how much dust there is in the air, as Chinese cities are growing at high speeds?” Wang said Tuesday.

Although the public has come to realize the severity of China’s air pollution, Wang said he feels the change has been painfully slow.

“This is not an issue to be ignored, and I want to magnify it so much that you cannot ignore it,” he said.

Coincidentally, the project’s 100-day phase of dust-collecting ended Sunday — right in the middle of this year’s worst pollution spell in Beijing, when its landmark buildings disappeared into thick smog and residents were asked to stay indoors.

Monitoring sites reported that the density of the tiny, poisonous PM2.5 particles had reached more than 40 times the safe level set by the World Health Organization.

Local media reports of Wang’s performance art went viral this week with the headline that his efforts had gathered enough dust to make a normal-size brick.

Wang said that his 400 hours of air-sucking had netted 100 grams (3.5 ounces) of dust, which has been added to a mixture to make a brick at a factory in the northern city of Tangshan.

The 100 grams were more than he expected when he first embarked on the project on July 24 with the $1,100 vacuum cleaner.

Wang said that after three days, the machine collected little dust. “I checked again after 100 days, and the dirt was far more obvious. It was black and dirty, and it crumbled upon touch,” he said.

Once the brick is made, it will be used in construction along with other bricks. “It should just disappear like a drop of water going into the sea,” Wang said. TVJ