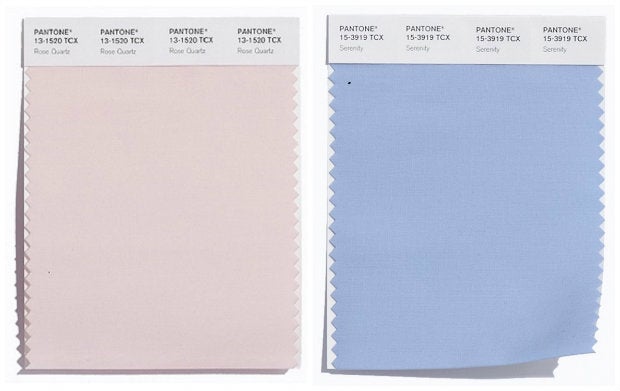 The experts at the Pantone Color Institute have chosen two colors of the year, Rose Quartz, a pale pink and Serenity, a shade that is closer to baby blue. AP

Pantone’s color of the year grows to 2 colors

The experts at the Pantone Color Institute have chosen not one but two colors of the year — named thusly — in a complementary pairing that spans fashion, media, packaging, housewares and a desire for more tranquility and calm in actual life.

Or so they say — they being color analysts, who span the globe in search of trends. Rose Quartz is a pale pink and Serenity is close but not quite what once was referred to as baby blue.

In fact, Pantone believes the blend reflects a gender neutrality that has strengthened over the last year or so and is sure to carry through to 2016 and beyond, said Laurie Pressman, vice president of the institute, based in Carlstadt, New Jersey.

It’s the first time Pantone has picked two colors of the year since it debuted the designation in 1999.

“This is a fusion of two shades,” Pressman said in a recent interview. “Rose Quartz is a warm and embracing gentle rose tone that conveys compassion and a sense of composure. Serenity reflects a mindset of inner peace.”

Those things, she said, are in short supply.

“Our lives are stressful, and what we’re seeing is consumers trying to cut out that noise by balancing the fast pace, their fractured lives, their hurried lives, with some downtime and some calm, and the opportunity to just switch off,” Pressman said.

But there’s more to the pairing than a desire for emotional nourishment, more quiet and more relaxation.

“There’s a calmness, but there’s also a happiness to it,” Pressman said.

In travels to home and interior design shows around the world, Pantone came up with examples of the two colors in lighting, kitchen wares and home accents such as throw pillows for the living room and sets of bedding.

Nowhere are the two colors stronger than in fashion — as seen on the streets, on the backs of celebrities and on catwalks around the globe, she said.

Blurring gender lines on catwalks had Valentino showing pale pink athletic-inspired shoes for men with a band of Serenity blue, along with leather backpacks showing off geometric splashes of the same shades.

In fashion, women have borrowed from men in suiting, color and silhouette for years. And they still do.

“But the real news is that men are exploring, and they’re experimenting with their other side,” Pressman said.

Pink for girls and blue for boys hasn’t always been the norm: In 1927, Time magazine printed a chart showing gender-appropriate colors for girls and boys as reflected in the wares of major US retailers, but even then opinions differed, Pressman said. Filene’s in Boston suggested parents dress boys in pink, as did Best & Co. in New York, Halle’s in Cleveland and Marshall Field in Chicago.

After World War II, with the return women back into their homes, pink rose to ultra-feminine levels.

Today, retailers are promoting collections intended to be worn by both men and women.

“People want choices. They don’t want to be pushed into a specific direction,” Pressman said. “They want to make that choice on their own. Today’s genderless styling is definitely a more modern approach than we’ve seen in the past, and it’s not necessarily trying to make a man look like a woman or a woman look like a man. It’s about creating a canvas.”

The Pantone palette and its color of the year

Why ‘color of the year’ matters