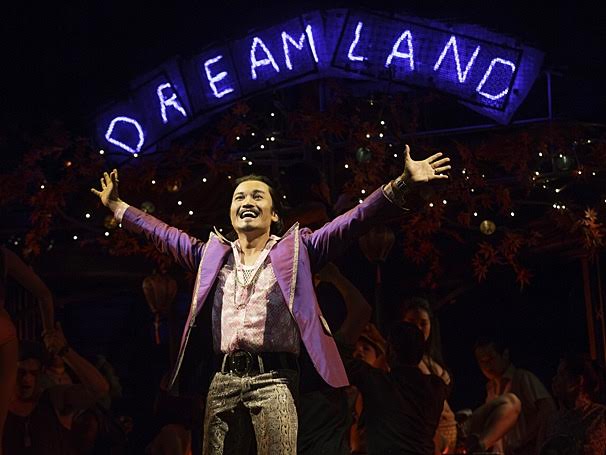 The Telegraph has hailed his performance as the Engineer as “memorably seedy.” PHOTO FROM BROADWAY.COM

‘Miss Saigon’s’ Jon Jon Briones is off to Broadway

From Quezon City to Broadway, with the West End in between. That appears to be the journey of Jon Jon Briones, who will be making his Broadway debut in 2017 as the Engineer in the revival of the musical “Miss Saigon.”

Producer Cameron Mackintosh has confirmed that the West End production at the Prince Edward Theatre will close on February 2016 and will transfer to Broadway in 2017.

“This is going to be my Broadway debut, and I’ll be turning 51 by that time,” says Briones. “Goes to show you that it’s never too late for dreams to come true.”

Briones had known about the transfer for some time now. “We finished negotiations for Broadway last month but even though I was expecting the announcement to happen, it’s still exciting and wonderful to read it in all the news outlets.”

“Miss Saigon” returned to the West End in May 2014 with record-breaking advance ticket sales. His performance has been met with raves. The Telegraph called it “memorably seedy”; The Guardian, comparing him with Jonathan Pryce who originated the role, said his Engineer was “an even grubbier, sleazier figure who is the victim of both his background and pathetic fantasies”; and New York Times hailed his “diminutive presence with a slithery, sleazy command that brings home the sardonic second-act showstopper, ‘The American Dream.’”

When it premiered in 1989, the musical thrust Filipino actors into the international theater scene. Lea Salonga and Monique Wilson were cast as alternates for the titular character Kim, a Vietnam war orphan who falls in love with an American soldier during the final days of the American occupation.

The current London revival features Filipino-American Eva Noblezada as Kim, with Filipino actresses Tanya Manalang as alternate for Kim and Rachelle Ann Go as Gigi. Noblezada will be part of the Broadway transfer.

Briones was part of the ensemble in the original production at the Theatre Royal, Drury Lane. He subsequently landed the role of the Engineer in Germany (where he met his wife Megan), and for a US tour, an Asian tour, a Manila production and a UK tour.

Born and raised in Quezon City, Briones has since relocated to Los
Angeles, where his wife and two children also work as actors (brionestalent.com). After his stint with the original London production of “Miss Saigon,” he acted in several Repertory Philippines productions such as the Lion in “The Wiz” and Enjolras in “Les Misérables.”

Before he joined the London revival last year, he was involved in the pre-Broadway development of the musical “Allegiance” with Lea Salonga. He’s also done TV work, with guest roles in shows like “Sons of Anarchy,” “Bones,” “The Mentalist,” and “Monk.”

During the break from March 2016 onwards before he debuts at the Great White Way, Briones says he will keep himself busy: “Actors don’t really go on holidays unless they are really successful and can afford to just take the time off. So, as soon as I get back to LA, I go straight to what actors do—audition and go to acting classes.”

He adds: “If there is nothing going on, my family and I will take our convertible and just drive somewhere nice and take a couple of days away.”