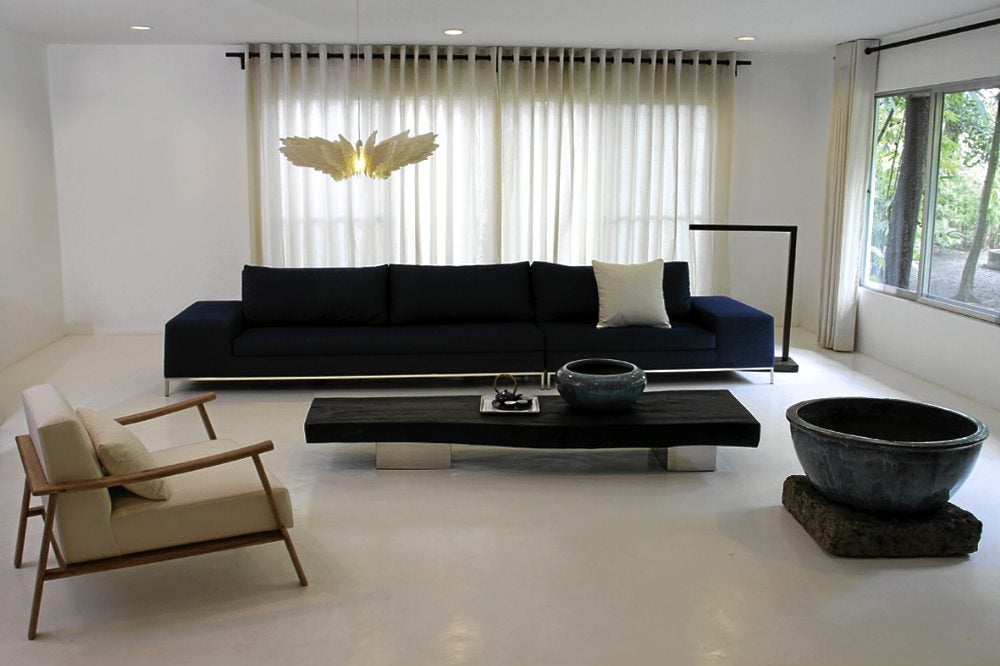 A visit to Milo Naval showroom is a visual experience

Standing on a one-hectare property, the atelier is like a house, surrounded by tropical foliage. It is lined with carabao grass, contrasted by pools of stone pebbles and moss-covered pathways.

Canopies of 12 varieties of bamboo and narra line the perimeter.

The factory of Naval’s business, Evolve Designs Inc., caters to foreign buyers who demand to see the product range and the manufacturing process.

Naval explains  they value designs using organic materials and are fascinated with their juxtaposition with leather and metals.

The name Evolve was culled from his design process. “It starts with one idea, then it builds up,” he says.

Naval cites the example of his mahogany work desk, topped with glass over rattan poles. The rhythm of the rattan poles is transposed into the headboard of a canopied bed and a screen divider. The pattern of matwoven jute strips in a stool is also replicated on the back of a sofa which doubles as side table, and a big ottoman which can work as  coffee table.

Asked his favorite designers, Naval says he could relate to Italian designer Antonio Citterio, famous for his streamlined designs and technology. Like Naval, Citterio is a family man. 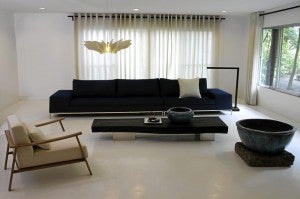 “His designs are family-oriented. The colors are basic—brown, orange and black.”

Naval adds that he admires the Italian’s understated sophistication. He also admires Spanish Patricia Urquiola for her playfulness and unique shapes, and architect Zaha Hadid for her bold, expressive designs.

The showroom reflects Naval’s signature earthy and spare style. The walls are whitewashed to bounce off the lights, and the flooring is covered in special white paint finish so that his works  pop out.

While most designers may produce great designs, the displays in their stores or showrooms tend to be bland. With his interior design background, Naval can show furniture and accessories to their best advantage.

“I look at the space to determine what furniture would be proportional to it. I also consider how the inhabitant or user would circulate. I can suggest how to set up the pieces and I limit the accessories.”

Naval establishes each vignette with a generously proportioned key piece. For instance, an acacia table made from a single solid piece was salvaged after a typhoon. Though rustic, it looks modern with contrasting stainless-steel legs. 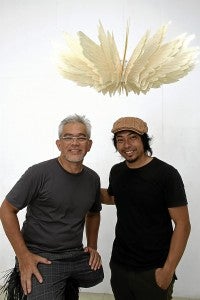 Naval emphasizes its massiveness by installing a stool made of plastic strips, inspired by the vakul—the women’s  grass headgear from Bataan—and a striking lamp inspired by Icarus wings.

Both were created by Filipino-Brit Daniel Latorre Cruz, whom Naval discovered in the recent Center for International Trade Expositions and Missions (Citem) show. Naval was impressed by the young industrial designer’s originality, logic and depth.

The Icarus lamp shade is made from mulberry paper, produced by Japanese designer Wataru. The fronds of the shade took after the  mythical figure, Icarus, who built wings made from wax and feathers.

Latorre Cruz points out that the sunlight enhances their gossamer effect.

“He (Latorre Cruz) is my bet for our future,” says Naval.

While the showroom is elegant, contemporary and spare, Naval’s office is more laid-back. The floor is done in a raw concrete finish, polished to exude refinement.

“The color is natural. It goes with my furniture,” he says. 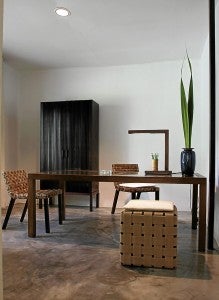 He furnishes the room with a rattan-and-mahogany table, abaca mat-woven chairs, and a mahogany slat cabinet to store his magazines and CDs and to conceal the speakers. The latter has also evolved into a clothing cabinet, ordered by a resort.

Aside from the homey ambience and the tropical garden, our visit is made memorable by the Navals’ hospitality. His wife and business partner Katherine brings in whole-wheat tortilla rolls that wrap grilled vegetables; ciabattas with cheese and vegetables; fruity pastries, fruit-and-nut whole-wheat bread and tarragon tea.

She later brings out gulaman, made from seaweeds culled from her home province, Sorsogon.

For some time, Naval has been working on the family rest home and garden in Sorsogon City. When the Hyatt Casino Manila invited designers for its annual Christmas exhibit which opens on Nov. 16, Naval decided to dedicate his new works to the indigent children of Sorsogon.

The theme revolves around pens and pencils that evolve into statement pieces. They are grouped  by color and transparency to form interesting patterns and woven together with nylon. The artworks range from an abstract Christmas tree fashioned from red pencils, to a leaf-shaped sofa  made of green pencils tied over a metal frame.

Naval explains that the colors choices are restrained for maximum impact.

“It’s not a traditional Christmas exhibit. I wanted to do something for the children of Sorsogon. Instead of producing something that can’t be used after Christmas, I decided to make these objects which can be dismantled. They can use them for school,” he explains.

Plans are afoot for the hotel to auction the pieces and donate the proceeds to charity.