‘Do not depend on a man’: Why the Quirino women are the family’s driving force | Inquirer Lifestyle ❮ ❯ 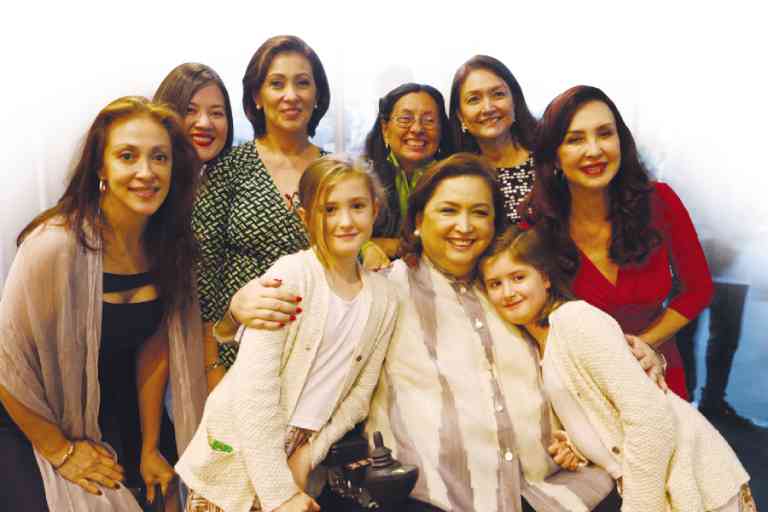 ‘Do not depend on a man’: Why the Quirino women are the family’s driving force

A slender woman rose from the audience and did an impromptu flamenco, twirling about and whirling her mantilla, as Russian bass-baritone Nikolai Massenkoff sang the Gypsy ballad “Ochi Chyornye.”

Massenkoff was a special guest at the White Russians’ tribute to the late president at Ayala Museum on Nov. 14, to thank and honor him for giving them sanctuary in the early 1950s.

He was nine when he arrived in the country with other Russian refugees fleeing Communism (Cossacks, Ukrainians, Gypsies, among them), who formed a close-knit community on Tubabao island in Samar. Now a world-renowned folk singer based in San Francisco, California, he, with some survivors, had recently returned, and for the first time met the descendants of the man who gave them a second lease on life.

To commemorate Quirino’s 125th birth anniversary on Nov. 16, the President Elpidio Quirino (PEQ) Foundation had tracked down some of the surviving White Russians all over the world and gathered them for a homecoming on Tubabao.

The foundation is run chiefly by Quirino’s direct descendants. Multimedia personality Cory Quirino and entrepreneur Ruby Quirino Gonzalez, both his granddaughters, are trustees of the foundation.

Its president, and also serving as family lawyer, is Lila Quirino, daughter of Quirino’s brother Antonio (owner of Alto Broadcasting System, which merged with Chronicle Broadcasting Network to form what is now ABS-CBN).

The men have been given individual tasks, such as family representation, but it is the women who are the driving force.

“We have a built-in drive,” says Cory Quirino. “We don’t have to be driven; we drive ourselves. We are self-motivated. We have what you call passion—a single-mindedness to get what we want. We love a good challenge, and never back down.”

They disseminate information on how their lolo rose from barrio teacher to computer technician, property clerk, lawyer, to the country’s sixth president. They organize events such as the grand birthday celebration in his birthplace in Vigan, Ilocos Sur.

Quirino was a descendant of Juan del Rosario of Abra, owner of sailboats for coastal trading. The family name was changed by Spanish decree.

Firstborn Mariano’s excellent service in the military earned him the rank of sargento contador, the highest position a native could have in the colonial army. He was sent to Spain for training.

In Agoo, La Union, he met and married 14-year-old mestiza Gregoria Mendoza Rivera. He later took over his father’s trading business and served as warden of the Vigan provincial jail, where Elpidio was born.

(Cory says they couldn’t trace the genealogy of their Lola Gregoria, even the whereabouts of her remains. They had searched for her tombstone in cemeteries in Ilocos, but found only weeds and creepers. Recently her aunt Lila told her their grandmother was buried in La Loma—“So, that’s one on my to-do list,” she says.)

According to oral history, Sy Kia arrived in the country from Amoy, China, with his 12-year-old cousin Sy Cip. His name Hispanized into Vicente Romero Syquia, he married Petronila Singson Encarnacion of Vigan. Son Tomas married Conchita Jimenez of Binondo, and their firstborn was Alicia.

Ruby Quirino Gonzalez recalls the tragedy that befell the family: Elpidio was just re-elected senator when war broke out. During the liberation of Manila in 1945, as the family fled their home on Colorado Street in Ermita (then no-man’s-land), they were caught between American shells and Japanese machine guns.

Elpidio was closing down their burning house while the rest went ahead and ran right into the crossfire. Killed were Alicia, 44, and children Armando, 20; Norma, 17; Fe Angela, 2. Of the five siblings, only Tomas (Tommy) and Victoria (Vicky) survived.

Contrary to popular belief, Alicia was not pregnant when she was shot, says Ruby. She was carrying the baby Fe, who was bayoneted by the Japanese, as witnessed by Vicky and Tommy.

Elpidio carried the corpses of his family one after another to Paco Cemetery, dug a grave for each with his own hands and buried them one by one. He never spoke about it again.

When he became president in 1948 (succeeding Manuel Roxas, who died of heart attack while in office), he made 16-year-old Vicky his First Lady and official hostess at Malacañang functions. He never remarried.

On Vicky’s side, with Luis “Chito” Gonzalez, are daughters Marivic, Ruby and Marissa, and son Louie.

Marivic is a professor in Madrid. She has three daughters and six grandchildren.

Ruby runs an export manufacturing business. She is also an advocate of good governance, education, social services, empowerment of physically challenged people. She has a son and two granddaughters.

Marissa works as a civil servant for an international organization in Geneva. She also paints on jusi and has exhibited her paintings in Switzerland, the United States and the Philippines. (As a young man, at one time, Elpidio, for a living, painted on the sleeves of terno.) She has lived in Europe for over 40 years. She has a daughter.

On Tommy’s side, with Conchita Rastrollo, are daughters Cory, Cecilia, Connie and Carmela; and sons Butch, Eddie, Ponce and Louie.

Cory, the most visible of the Quirino women, is a wellness guru, Inquirer columnist, lifestyle TV and radio host, best-selling author of health and beauty books, and civic leader. She has a daughter and two grandchildren.

Cecilia is a human-resources consultant for the United Nations Development Programme in New York. She serves as the PEQ Foundation’s coordinator for the Filipino community on the East Coast. She has three sons.

Connie has been painting for 25 years, having been mentored by National Artist Federico Aguilar Alcuaz. An oil portrait of her grandfather by her was part of the exhibit “Defining Quirino” at Ayala Museum last month. Any foundation project that’s artistic has been assigned to her, such as transforming the defunct Quirino Bridge in Santa, Ilocos Sur, into a bridge park. She is also a part-time print and TV model. She has four sons and two grandchildren.

Carmela is an advertising and marketing communications executive, focusing on client service and account management. Based in Toronto, Canada, she also represents the foundation abroad.

Is there any distinguishing trait that would make one say, “Oh, she’s a Quirino woman”?

“We laugh the same way,” says Cory. “We laugh with our heart. We give our all, in an unconscious way. It’s an all-out kind of laughter. There’s a lot of spontaneity in us.”

In the latter part of the Quirino administration—despite populist moves such as building infrastructures; establishing the Social Security Commission (precursor of the Social Security System); and signing the Minimum Wage Law—it had become unpopular. It was criticized for everything, from failure to check the Huk rebellion to high expenditure.

Graft and corruption in government was couched in Senate President José Avelino’s quote when he was about to be investigated on tax evasion, influence-peddling and money-making activities: “What are we in power for?”

Amid Quirino’s creation of an Integrity Board (precursor of the Presidential Commission on Good Government), he was accused of nepotism and high living. He was said to have purchased with taxpayers’ money a brass bed worth P5,000 (astronomical at that time), though later found to cost only about P300 (still huge).

Cory says her lolo left that bed in Malacañang; it was there after President Ramon Magsaysay’s family left the Palace, but now it is nowhere to be found.

Most scandalous was the gold-plated chamber pot he was said to own. He himself seemed scandalized when told about it: “What will I do with that?”

In fact, it was made of stainless steel, but the tale of the golden orinola has stuck in people’s minds.

Some believe there was a smear campaign against him orchestrated by the Americans, whose military bases he wanted limited in the country.

Are the Quirinos used to such extravagant lifestyle and luxurious living?

“We are comfortable but not necessarily luxurious,” says Cory. “Our father would always tell us: Only if you sweat can you survive. Learn to develop a career. Do not depend on a man. You have to learn to sustain yourself. That’s why each of us has a career. We are not the stay-at-home type of women. We instinctively thrive on work. Majority of us can balance personal life and career or business.”

Cory says her cousins and siblings don’t meet as often as they’d want to since some have settled abroad—but their Lolo Elpidio, his memory, legacy and ethos, holds them together.

On Feb. 29 next year, there will be another clan reunion for their lolo’s 60th death anniversary. Again the Quirinos would be seeing one another, updating each other, looking over keepsakes, in the old familiar places.