Restored Malate Church is the one the community remembers | Inquirer Lifestyle 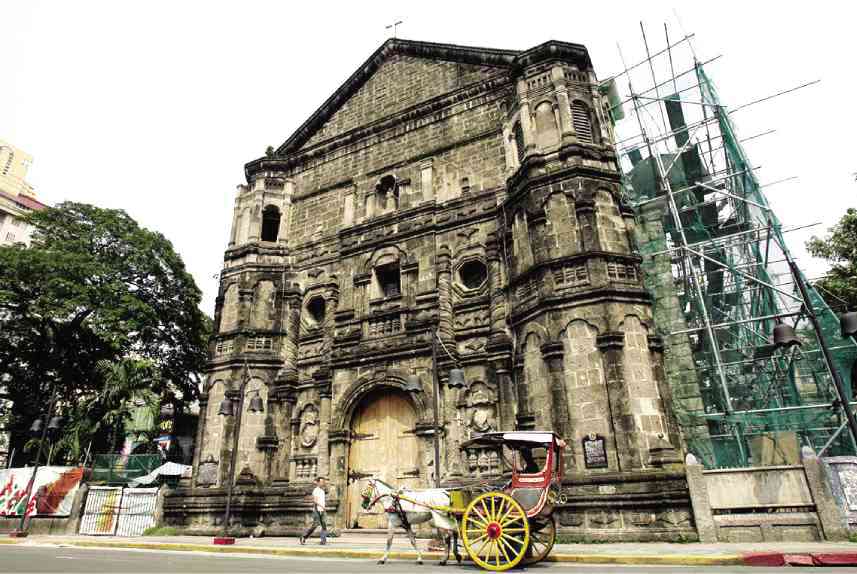 ASTONE fragment falling from the molding led to a general overhaul of this precious built heritage. INQUIRERPHOTO

Restored Malate Church is the one the community remembers

FOR A HISPANIC colonial structure, the interior of the Church of Our Lady of Remedies on MH del Pilar Street, Malate, Manila, looks too austere.
The walls are plain off-white and unadorned except for the Stations of the Cross with engravings à la Gustave Doré. There is no retablo on the apse, only the icon of Nuestra Señora de los Remedios brought from Spain in 1624.

Instead, the retablo is outside—the whole three-tier façade as a monolithic altarpiece of adobe incorporating rich details and eclectic architectural styles: twisted columns from the Mexican Baroque; cylindrical buttresses from Persian architecture; Romanesque columns on the first tier; plain pediment from the Renaissance; trefoil blind arches, diamond and rectangular patterns on the moldings, and shallow relief work from Moorish art.

Also known as Malate Church, this ancient structure fronting Plaza Rajah Sulayman grabs passers-by first with its peculiar façade. It is one of only two church façades with twisted columns in the country, the other being the Church of Our Lady of the Gate (Nuestra Señora de la Porteria) built by the Franciscans in Daraga, Albay.

The second architectural feature that immediately grabs passers-by are the massive wooden doors with steel-plate ornaments that look like straps and hinges. When one gives the door a few taps, however, one is puzzled why it sounds like plywood.

These are faux doors, hollow at the core. The original of Philippine hardwoods (narra, yakal, ipil, mangkono) had to be detached and disassembled for detailed investigation and repair work. The metal ornaments, which were latter-day adds-on, had to be removed as their heavy corrosion contributed to the deterioration of the wood.

Explains the Malate Church Conservation bulletin: “Rotten parts were carved out then patched up or replaced by the same wood species. Replacement and new components were fumigated to prevent termite attack. Fake wood grains were meticulously painted over the new components to blend with the old ones before paraffin wax was pressed onto the wood to protect it from moisture.

“The main door is temporarily substituted by one painted using the faux-finish and trompe l’oeil techniques to simulate wood grains and other features of the actual door, to maintain the façade’s look that the community remembers and for stakeholders to appreciate, especially during photo opportunities for weddings and other church activities.”

In 2009, a stone fragment fell from the exterior molding of the structure’s north side (Remedios Street). This made the parish take a closer look at the condition of the church.

“As a conservation project is like opening a can of worms,” says the bulletin, “repairing one small part would lead to discovering other problems.”
Facing Manila Bay and thus exposed to the elements, plus acidic pollution and vehicular vibration along Roxas Boulevard, put the ancient structure at high risk.

Previous restoration efforts did more harm than good. The palitada (plaster) used to coat supposedly to protect the walls was concrete, which traps water that damages the sensitive stones.

Adobe being a soft volcanic rock, quite porous, it accumulates moisture from rain to sea wind to dew. It is also friendly to biological growths, which contribute to the structure’s further deterioration.

In 2010, the parish launched a restoration program called 5-5-5 March of the Thousands (probably alluding to Xenophon’s March of the Ten Thousand). The restoration, to be done in five phases, would cover a period of five years; and each year the parish would need to raise P5 million.
Here is a motive force that generates action.

Reports the bulletin: “Early in 2011, five graduates of Escuela Taller Intramuros started working on the exterior north wall. One of the first tasks was to remove the concrete plaster by carefully chipping it off using customized chisels crafted by the students themselves.

“The heavily damaged stones, usually on the moldings, were replaced by similar stones fashioned traditionally. The walls were plastered with a compatible lime-based mortar to protect them from weathering, improve their breathability and prevent the accumulation of moisture. The porous, low-thermal conductive property of the lime-based plaster would also improve the temperature inside the church.

“More ceiling and roof vents were added to increase airflow and reduce accumulated heat and humidity inside the church. This environment-friendly approach (passive cooling) is complemented by solar panels installed on the south side of the roof to provide power for interior lights.

“The choir loft supported by a heavy steel beam inserted into the wall near the window had to be removed due to structural threats by its sheer weight and corrosion. A choir loft of wood independent of the wall will be installed once the design is completed.

“Missing stained-glass pieces of the windows were reinstated by the same company that first installed them. Escuela Taller helped in repairing and repainting the window frames and iron grilles.”

On Dec. 2, the parish council held a special conference to mark the closing of the program. After a ceremonial lighting at the main façade, a panel presented the final report on the milestones and accomplishments of the project.

Gueco related how they raised the funds, from direct solicitation to mounting concerts. He thanked the generosity of donors, from the Spanish government to the Escuela Taller youths who undertook the project.

Father Leydon reported that the parish raised over P26 million in five years. Some P23 million had been spent and restoration of the church exterior was finished. There was a balance of about P3 million.

This recalls the construction of the third church in 1864 when Fray Francisco Cuadrado “toured the city and nearby provinces to raise the necessary funds.” Getting more than what he needed, he gathered the poor fishermen of his parish and shared with them his “savings.”

Malate Church has a long history of rebuilding and restoration.

A church of light materials was built by the Augustinians in 1588. A stone church was constructed in 1591, its convent described by a contemporary as “a magnificent work of arches and stone.”

Both structures were heavily damaged by an earthquake in 1645. Then they were ordered demolished by the governor-general when Chinese warlord Koxinga posed a threat to attack Manila in 1667. (Stone churches were turned into strongholds by outside forces. In 1762, British invaders captured Malate Church, operated from its tower, and thus sacked Manila.)

The church was rebuilt in 1677 when the Chinese pirate died in Formosa just before the planned invasion. The next two centuries, especially after the British occupation of Manila, were an intermittent process of restoration—until another earthquake destroyed it in 1863.

Fray Cuadrado constructed a third church the following year, rebuilding from what remained of the walls and the façade. Then a typhoon damaged it in 1868. Reconstruction and renovation continued for the next three decades.

After the Spanish priests left the country, secular Filipino priests took over the parish, until the arrival of the Redemptorist missionaries in 1912. When the Redemptorists moved to Baclaran in 1929, the Columban missionaries took over and made the parish the base of their mission in the country.
World War II left the church charred and roofless with just the walls standing. Five Columban priests, led by Fr. Patrick Kelly, were rounded up by the Japanese and never seen again. (A commemorative metal plate has been installed on the church façade.)

Reconstruction began soon after the war. The indefatigable Irish priests rebuilt the roof, main altar, dome and transept in the 1950s, and painted the interior in the late ’70s.

Such reconstruction involves a meticulous replication stone by stone, detail by detail, even of the pristine color tonality of the original. It is an intensive work undertaken by students of Escuela Taller.

Escuela Taller (“workshop school” or “school workshop”) was established in 1985 by the Spanish government to “train the younger generation in technical skills related to the restoration efforts of Spanish cultural heritage.” The program expanded to Latin America where Spain has a lot of built heritage.

In 2009, it opened at Revellin de Recoletos, Victoria Street, Intramuros, Manila, the first and only one such school in Asia. Four years later, Escuela Taller Intramuros became a nongovernment agency, a self-sustaining Filipino organization supported by agencies such as the NCCA and Agencia Española de Cooperación Internacional para el Desarrollo (or Aecid, the Spanish aid agency).

Asserting the “significance of material culture, particularly of built heritage, in fostering a people’s sense of place and identity,” the school gives extensive training on masonry, carpentry, metalwork, electrical and plumbing, as well as specialized classes on wood and stone carving and decorative-painting finishing. Subjects include Measured Drawing, Building Material Science, Culture and Heritage, and Values Formation.

As soon as they finished with the exterior of Malate Church, the youths would have another job in their hands: the church interior. And beyond.
Concludes the bulletin: “The restoration of the church does not stop at the structure itself. A design for the entire church grounds is being developed, featuring improved parking layout, walkways, a garden and a fence that will match the church architecture. Development of the whole complex is being addressed to enhance the architectural and spiritual experience in Malate Church.”

All these indicate that any community with a strong political will and a clear understanding of its identity can salvage its precious heritage from the vicissitudes of time and the battering of the elements.