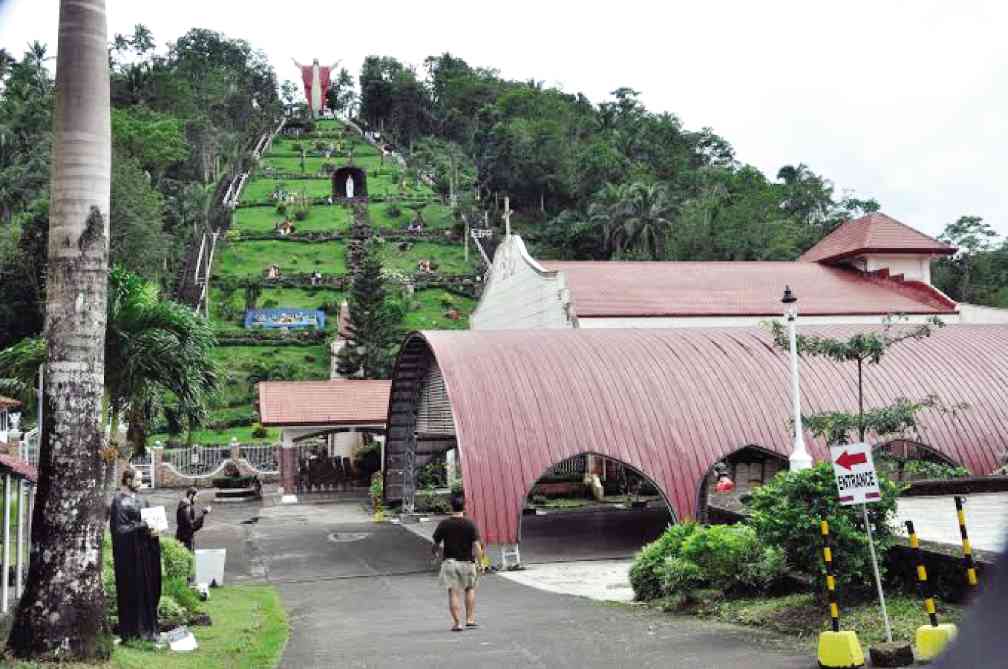 AS THE millennium approached, Fr. Joey A. Faller of Lucban, Quezon, had an epiphany, a vision. There was a church and a grotto, and many people worshipping. Something was impelling him, a healer, to go out there and build the church, the grotto, and treat those people who may be sick.

The vision was persistent, and confirmed during a Charismatic renewal meeting in Rome later.

At the turn of the century, Father Faller began working to realize the vision. He called on friends to help him, established a foundation called Kamay ni Hesus (Hand of the Lord), and construction began. First the church, designed by architect Emily Garcia and visual artist Paul Dimalanta, then an impressive grotto also designed by Dimalanta, which later became famous and much photographed.

The grotto, garlanded with plants, was made possible by Benny Brizuela, a businessman who’s now a councilor of Lucena City. It has a pantheon of saints, stairways to heaven leading to a towering figure of the Messiah, 15 feet high, His hands spread out.

The Kamay ni Hesus Shrine became operational in 2004. There were healing Masses, and the crowds came and multiplied. There were stories of those who were healed, including a few celebrities who were members of Charismatic movements and the Oasis of Love. Word of mouth attracted more pilgrims.

Now, Lucban is a cool town at the foothills of sacred Mt. Banahaw, and it rains here 260 days of the year. The walls of the church grew damp, affecting the mural somewhat. So, just recently, Father Faller called upon Dimalanta to restore the three-panel work to its former glory.

The first panel shows Moses receiving the Ten Commandments in Mt. Sinai.
“The mountain represents the place where you experience God,” says the healing priest. “Just like Mt. Banahaw.”
The sunset colors above Moses actually represent the Burning Bush, God the Father.
Like a resort
The middle panel shows a sculptural, three-dimensional Jesus (by an unidentified artisan) rising majestically.
“Our faith begins with the Crucifixion and ends with the Resurrection,” observes Father Faller. “It is the idea of hope, the theme of hope. The Lord will heal whatever problems, whatever illnesses we have.”

Christ rises above rock formations, and we see three lambs grazing along the grassy knolls, recalling the words of the Savior: “Feed my lambs, feed my sheep.”

In the third panel is Jesus being baptized by John, as the Holy Spirit, represented by the dove, hovers above.
“Jesus and John are cousins, that is why they look alike,” says the priest. “That is the interpretation of Brother Paul. The artist has the correction interpretation.”

Kamay ni Hesus has a resort-like atmosphere, adding to its fame as a tourist attraction and spiritual landmark. There is a Garden of Eden, playground, statues of saints in the clean and well-maintained grounds, and a striking house of prayer and spirituality in the form of Noah’s Ark, which operates like a hotel.

The shrine is a perfect place to pray, meditate, go on a retreat and renew yourself spiritually amidst idyllic surroundings.