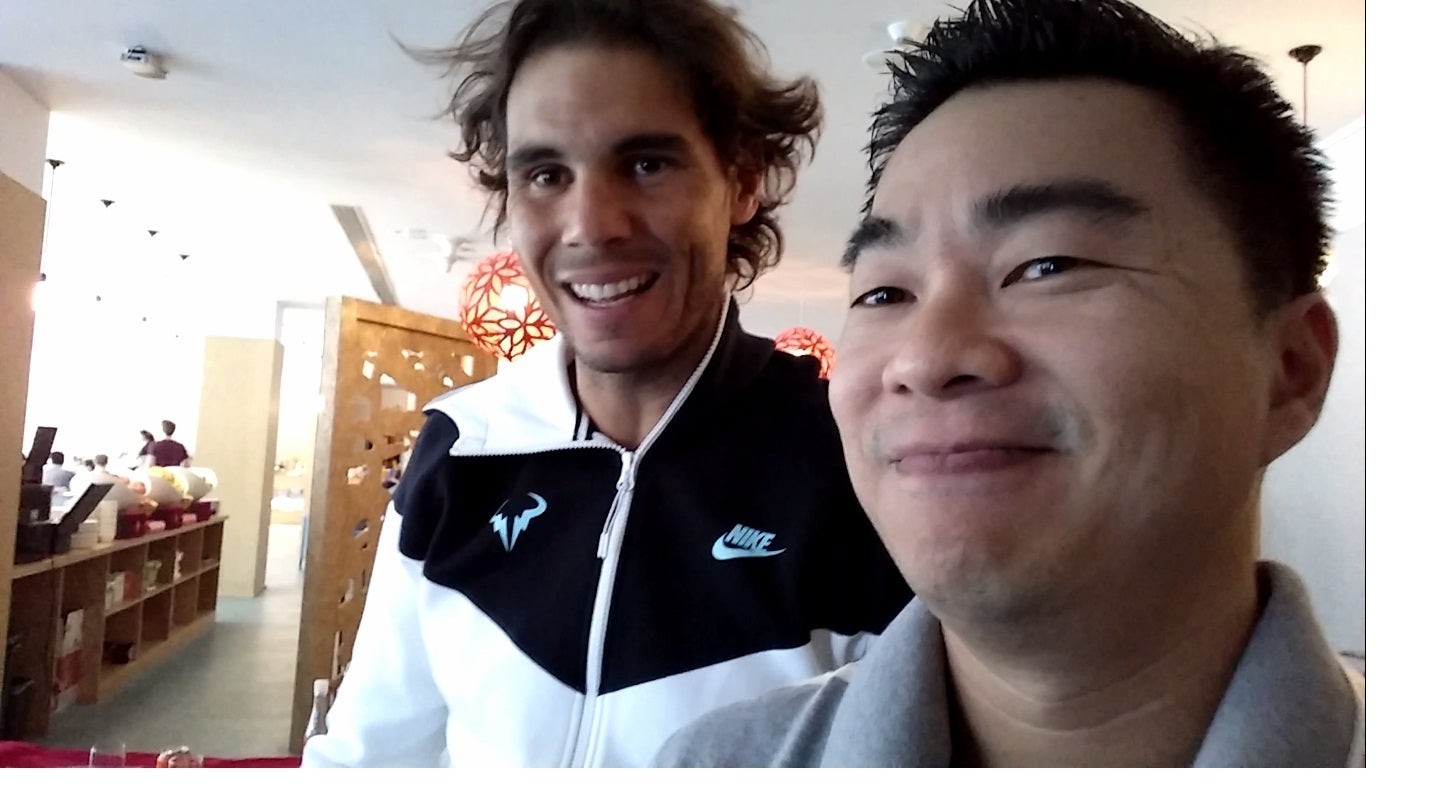 It is not every day that you sit three feet across from arguably one of the greatest tennis players ever; as much as I wanted to run and shout, “Vamos Rafa! Filipinas te quiere mucho!” I had to restrain myself.

As to how I found myself in this situation, let me recall how I ended up in the players’ lounge/cafeteria at the China Open last October, sitting right across from Rafael Nadal.

It all started two months before, when my wife May gifted me with plane tickets to

Beijing to attend the China Open, one of the few tennis events outside the grand slams (United States, Australian, Wimbledon, French Opens) that brings together the male players of the Association of Tennis Professionals (ATP) and women players of the Women’s Tennis Association (WTA ).

This is indeed a treat for the audience, as the power and aggressive game of the men is sharply contrasted with the finesse and grace of the women.

I would also get the chance to watch two former women’s world No. 1 players, the Danish Dame, Caroline Wozniacki, and six-foot-tall Serbian stunner, Ana Ivanovic. To say I am excited is an understatement.

I have been a tennis fan since I was barely out of my mother’s womb, as both my parents loved the sport, played it, and watched it incessantly on TV.

I managed to book my hotel and map out a plan on how to go to the venue. Fortunately, I had a friend who told me he could score me some “VIP passes”—how VIP it would be, I was about to find out.

To get to the National Tennis Center, the venue of the China Open, I took the subway until I reached Lincquiao station, a five-minute walk away.

Upon exiting the station, I realized how popular this event was—there was a throng of scalpers waiting to either buy or sell tickets.

Upon reaching the venue, I quickly met up with my friend and got my ID. My heart skipped a beat when I saw that I was allowed access to the players’ lounge and cafeteria and the male locker room.

I took a deep breath, and mentally prepared myself for what could be a very interesting adventure.

The first few days I still had my doubts as to how far my ID would take me, so I decided for the meantime to stay in the audience area. This was where I was able to take selfies with some of my tennis heroes as they went in and out of the tunnel to the locker room.

It was also here that I first encountered Nadal during one of the post-game signing events. I decided to try my luck and held out my white cap, hoping that he would take notice and sign it.

I cried out “Vamos!” and immediately my cap was grabbed by the Spanish lefty. I was fortunate to be one of the five people he signed autographs on that day.

Apparently my Mandarin handicap was no hindrance during the China Open. Knowing how to say hello in Italian got the attention of Flavia Penetta, the recent US Open winner. “Grazie, grazie,” she graciously replied as I congratulated her on her wonderful  grand slam win.

Encountering many big names in tennis made me want to share the moment with my tennis club mates back home. It was then that I decided to record my encounters with the tennis stars.

My plan would be to approach the player and ask if he/she was willing to read a greeting to my friends, which I would then record on video. One of the players I approached was somebody who looked like Croatian Borna Coric, the youngest in the top 50 right now.

But after telling him the idea, I was surprised that he refused. At first I thought he was being difficult, until he said, “I’m not Borna, I’m Djordje Djokovic!”

I felt a rush of blood to my cheeks. I then realized the guy in front of me was the younger brother of the current undisputed No. 1 tennis player in the world, Novak Djokovic. Awkward!

Such were the travails of an overeager and overwhelmed fan.

After a few days, I decided to test if my VIP ID could really grant me access to the players’ lounge. In this holy of holies was where the players and their staff could relax in private.

Flashing my ID to the guard outside, I was let in without a hitch, and it was here that I found myself three feet away from arguably the most famous Spanish sportsman in history, Rafael Nadal.

He had his headphones on, and seemed to be preoccupied with the video playing on his laptop. I waited and wanted to make sure that I wasn’t disturbing him. But I knew I had to act fast, otherwise he might leave the lounge and I would have lost the opportunity.

Gathering my nerves, I walked over and greeted him, “Hola Rafa, soy de las Filipinas.”  “Hi”—his reply was accommodating but guarded.

I continued, “Will you be coming to Manila for International Premier Tennis  League  (IPTL)?” “Yes!” was his immediate reply.

“Would you mind giving a quick message to all your fans in Manila?” I asked.

Quickly I brought out my phone and began recording my moment with the 14-time Grand Slam winner.

Rafa immediately left after our “session.”

I was so tense during those moments that I felt I needed to go to the restroom. Realizing that my ID granted me access to the ATP male locker room, I decided to use the opportunity. As I washed my hands afterward, my amigo Rafa entered the room and stood right beside me.

Was I supposed to say hi, since we spoke a few minutes earlier? Oh wait, I had a pack of chichacorn in my bag, I think it might be a good idea to offer it to him as a gesture of gratitude for accommodating me earlier.

As I reached into my bag, I looked at Rafa and saw that he was violently rocking his head back and forth.

I then remembered that part of his quirky pre-game routines was for him to headbang three times before he tied his head band. I was stunned by the thought that I had disrupted one of his pre-game rituals!

“Sorry, Rafa, good luck with your game,” was all I could say  as I raced out of the bathroom to leave him alone.

Fortunately, Nadal did go on to win his quarterfinal match against American Jack Sock in a three-set thriller.

He did go all the way to the finals, but lost in straight sets to the seemingly unstoppable Novak Djokovic.

From my wife’s birthday gift of the trip, the anticipation on the flight over, the sights and sounds of a foreign land, the fortuitous encounters, to the mistaken identity gaffe, all the way to being a willing though tremulous almost-participant in Rafa’s pre-game ritual—I would have to admit that this really was a dream that had magnificently come true. Vamos!

The author is the vice president of the Makati Ace Tennis Club.