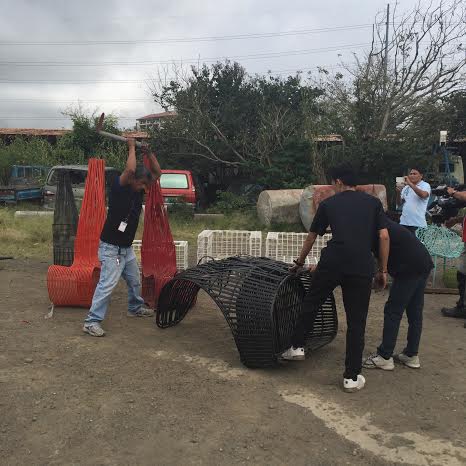 FURNITURE carrying designs illegally copied from the works of designer Kenneth Cobonpue are now being destroyed at the courtyard of the Tagaytay City Regional Trial Court as ordered by Judge Jaime Santiago. Cobonpue is prosecuting several businessmen selling furniture based on his designs for violating the country's Intellectual Property Code.

Relief was visible on Kenneth Cobonpue’s face as workers of a forwarding company smashed illegal copies of his furniture to bits at the courtyard of the Tagaytay Regional Trial Court this afternoon.

“It feels really good. Finally, this is a victory for intellectual property rights, not only for myself but for all other designers in the Philippines,” Cobonpue told Inquirer Lifestyle as he watched the destruction of the illegally copied items.

Cobonpue, whose globally renowned furniture designs can be found in the homes of Hollywood royalty, is the first prominent Filipino creative to actively go after copyright violators.

Cobonpue had obtained an order from Judge Jaime Santiago of Branch 18 of the Tagaytay City Regional Trial Court to destroy a truckload of illegally copied furniture seized from RSK, a shop found along the national highway from Sta. Rosa, Laguna to Tagaytay. RSK had been churning out illegal copies of the designer’s pieces in 2013, including the iconic “Yoda” chair, the “Dragnet” chair and the “Voyage” chair previously ordered by Hollywood actors Brad Pitt and Angelina Jolie.