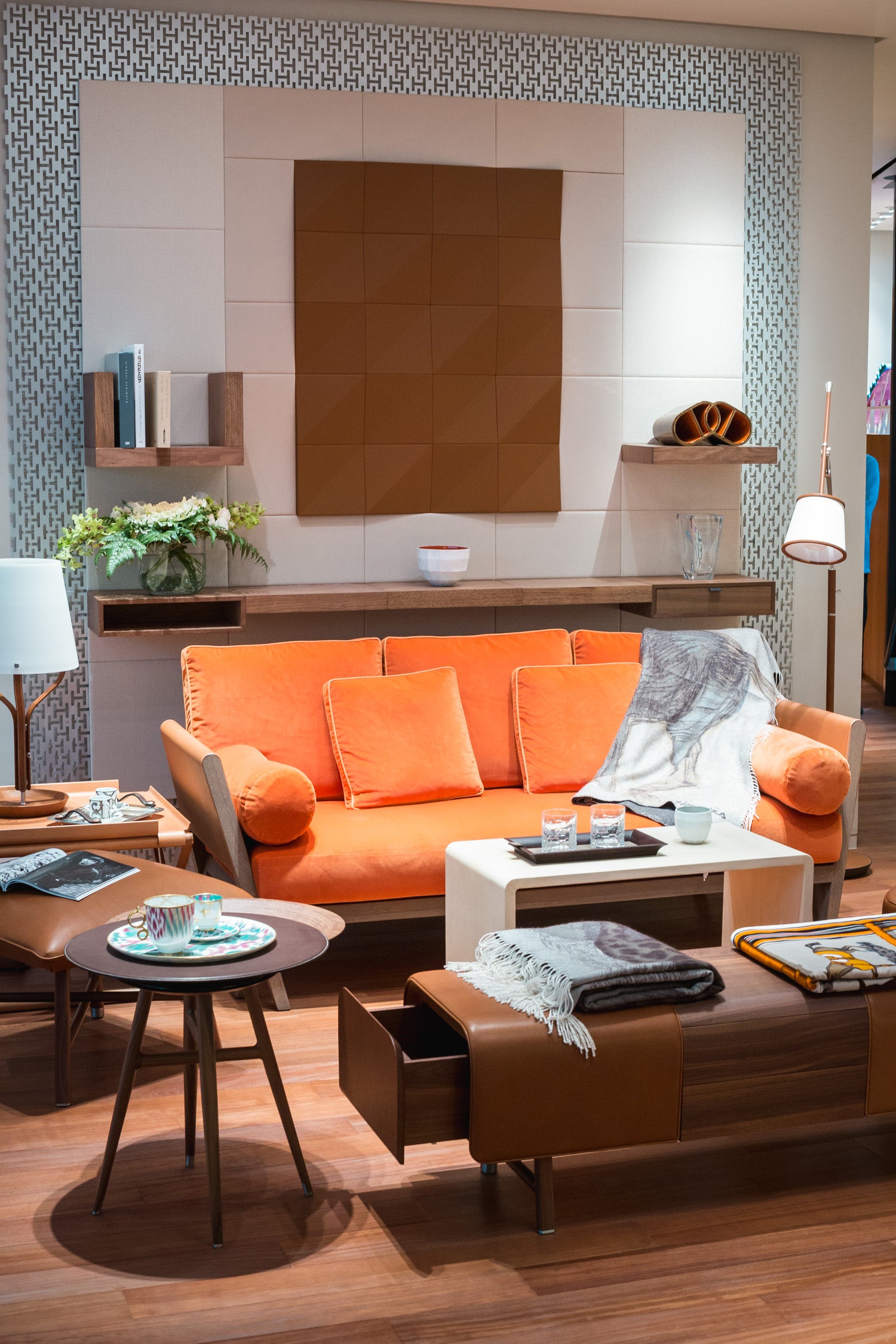 The Hèrmes Maison living room setting in Greenbelt 3. The centerpiece is the reception sofa of washed oak frame, its cushions upholstered in Hèrmes-orange velvet, which is customizable. PHOTOS: JILSON SECKLER TIU

If anybody ever had any doubts that affluent Filipinos are ready to shift from shopping for Birkins to ordering prized Hermès furniture, the now-empty space where a long, walnut-and-leather work desk used to be in Hermès Maison in Makati on its opening day should dispel those misgivings.

Hermès Maison, the store that exclusively carries the French luxury house’s line of furniture and other home accouterments, quietly and without fanfare opened its doors Dec. 6 right above the Hermès boutique in Greenbelt 3, Makati.

Late afternoon, a walk-in customer—also quietly and without fanfare—snapped up the slightly curved work desk on display. It’s of Canaletto walnut, with a tabletop covered in bull-calf leather, by Italian modernist designer Enzo Mari. The desk, which costs just south of P1 million, is part of Hermès’ first-ever furniture collection from 2011.

The gentleman also bought the spindly minimalist lamp, called Pantographe, resting atop the desk (about P450,000), as well as the leather writing desk pad. His impromptu shopping spree didn’t stop there: He also placed an order for the sofa on display (about P1.7 million), leather and oak-framed with Hermès-orange velvet cushions; its upholstery can be customized, and would take up to six months to deliver. By our rough estimate, he spent close to P4 million at the store in under an hour.

Not soon after the man left, a younger Caucasian client, with his Birkin-toting Filipino wife and young daughter, walked in and wanted the same desk. The couple also pored through the store’s vast swatches of furnishing fabrics and wallpapers.

Actress Heart Evangelista, a valued Hermès regular, also popped in and walked away with several smaller items, including throw pillows.

“When we decided to bring in the furniture, we always thought it would be a project-based business and that we would only work with architects,” said Hermès country manager Mario Katigbak. “We never thought of it as a retail business,” he added with a laugh, as he mulled over what would replace the space vacated by the sold desk, by then covered with protective cloth and ready for delivery. After all, they’ve only been open one day.

“But it’s good to have both,” he said, quickly acknowledging his happy dilemma.

Even Anton T. Huang, president of Luxury Concepts Inc., which owns the Hermès franchise here and is a subsidiary of the SSI Group, voiced his concern when I brought up Hermès Maison at a recent media lunch. “Do you think there’s really a market for that?” he asked rhetorically.

In the weeks leading to the Hermès Maison opening, the first concessionaire store of its kind in the world—all other Hermès Maison are owned by the French house—Katigbak and his team had been working with select architects, with whom they could develop homes.

Apart from customizing materials and furnishing fabrics, Hermès Maison creates bespoke interiors and furniture for clients. The Module H, for instance, is a modular screen and partition system designed for the company by renowned Japanese architect Shigeru Ban.

Sculpted metal sheets forming the letter H are stacked and interlocked together to form a partition or an accent wall, like the current display in Greenbelt. It can be combined with leather or fabric square panels, say, for a headboard. An accredited Asian company called Redwood is tasked to install such fittings.

Hermès Maison also creates bespoke wardrobes, china cabinets and the like, and may take up to a year to deliver.

Hermès’ trademark understated elegance is evident in the existing furniture collection, with their clean lines and exceptional materials. At this level of luxury, it’s clear to see that the devil is in the details: Even the wirings and cables of the lamps are thoughtfully covered in leather, and some furniture pieces have either hidden drawers or compartments for function and practicality.

A low-slung bench called Cheval d’Arcons is a chair-coffee table-storage in one, with its concealed drawers and a wooden section that doubles as coffee table. Its shape is inspired by the pommel horse, a nod to the house’s saddler heritage.

There’s also a leather ottoman, with a seemingly misplaced strap akin to that of a stirrup, but is actually used to lift the top portion to reveal storage underneath. It’s storage, footrest and mobile seating in one. At least two other side tables also have hidden compartments.

“Hermès isn’t about a complete look,” Katigbak noted. “It’s about outstanding pieces that would fit in any setting… We did our survey, and our pricing is comparable to other stores here selling European furniture.”

This year, Katigbak also brought in Crystal Saint Louis, makers of chandeliers, barware and other crystal décor, as well as Puiforcat, which is known for silver flatware and tableware. Both brands are owned by Hermès, and have their own showrooms (by appointment only). He happily shared that they’ve closed the deal on a chandelier, worth in the low eight figures, for a private home.

The men’s collection and the gifting items for babies from the store below have been moved to Hermès Maison. If the shopper can’t wait six months for the furniture, the brand’s selection of porcelain and tea sets, bath and bed linens, and other small decorative objects are readily available.

The store, for now, can be accessed via the escalator outside the Hermès boutique until the in-store elevator is installed some time early next year.