Behind a hip brand is a hip mom | Inquirer Lifestyle 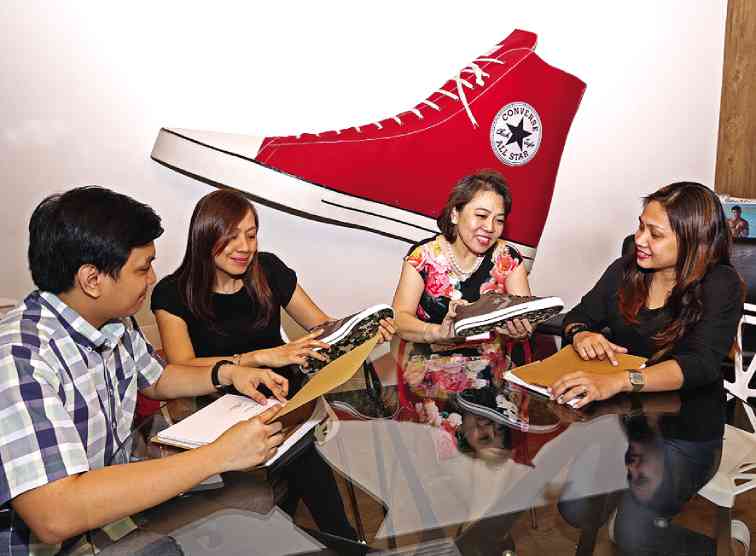 GO GETS a lot of help from her “innovative marketing people.”

Behind a hip brand is a hip mom

A conservative Chinese-Filipino family upbringing and a background in accounting might not seem like the best preparation for running a company whose product is synonymous with rock ‘n’ roll and youthful rebellion.

But Margie Go, CEO of Filcon Manufacturing Corp., the Philippine licensee for Converse shoes, has managed to make it work for her.

“Iconic” is a word that’s been overused to the point of meaninglessness, but not when it’s applied to the Chuck Taylor All Star, the brand’s flagship product.

The first-ever basketball shoe has managed to keep its youthful appeal despite being nearly a hundred years old, and had been the footwear of choice for punk rockers, including the Ramones and Kurt Cobain (although, it’s been noted, Michelle Obama also rocks a pair).

Converse has also remained a player in the intensely competitive global sneaker market, where huge companies such as Adidas and Nike as well as smaller American and European brands struggle for the hearts and feet of increasingly selective and discriminating Filipino consumers.

“It’s very fast-paced, and every quarter there are a lot of changes,” says Go. “To reach the millennial market, we really have to update ourselves and make sure we can reach them easily and quickly. These people tend to trust more their peers’ recommendation and the information they get from the Internet and social media, so you have to feed them the information they want and share experiences with them. You have to know the character of the millennials and address what they want.”

Fortunately, in this regard, Go has a secret weapon.

“My three children are exactly in the target demographic of the brand,” she says. Her eldest son, 24, now works in the Hollywood film industry; her second, 20, is an economics major in Boston; and her youngest, 16, is in second year high school.

“I always consult them to find out what they are looking for, what music they are listening to, what Internet sites they are looking at,” she says. “I also ask them what they think about our products, how’s the fit, the comfort, what their friends are looking for, what’s the best medium to reach them. It becomes easy for me because my children feed me this information. They tell me what the new trends are. I even attend rock concerts so I can learn what young people like.”

Since she became CEO, Go admits, marketing has been her main challenge because her background has been in accounting and finance.

But, she adds, it’s also been a rewarding journey.

“It has been very challenging,” she says, “but I’m also happy because we have a lot of good marketing people who are also very innovative.”

Go, 58, joined the company in 1983 as comptroller, and rose through the ranks, eventually acquiring shares and becoming its CEO.

She grew up, she says, in a typically conservative Chinese-Filipino family, the middle daughter in a brood of seven. Her parents were in the warehousing business.

“The Chinese are very strict when it comes to values,” she recalls. “Discipline, responsibility, making sure you have a good credibility.”

But traditional Chinese families are also notorious for valuing sons over daughters.

“Girls become second-class citizens in their own homes, even when it comes to food—boys get more than girls,” Go recounts. “But my mom was considered ‘modern,’ because she treated us all equally. I never had any experience of being discriminated against because of gender.”

Unfortunately, her mother died of a serious illness while Go was in her sophomore year of accounting studies at the University of the East (UE).

“We didn’t expect this would happen,” she reveals. “As a result, we as a family became close, we helped each other and we became more independent.”

Her mother’s death also took a financial toll on the family, having been the businesswoman in the family.

“I worked hard even in college,” Go says. “I would take classes in the morning and teach in a Chinese school in the afternoons.”

But New York didn’t agree with her, and she returned after only a year.

Upon a classmate’s recommendation, she was hired by Filcon as comptroller in 1983, the same year it became the Philippine licensee for Converse. The owners gave her a stock offer, and with her savings from her time in the United States and some family money, she acquired a share in the company.

The year 1983 wasn’t the best of times for business, with the Aquino assassination and the recession, and more turbulence was to come with the Edsa uprising, the coups, the Asian financial crisis in the 1990s, and Converse’s bankruptcy at the turn of the millennium (it has since been acquired by Nike).

Go helped the company through these growing pains, pushing for computerization as early as 1986, when personal computing was still in its infancy. She even enrolled in a short course on computers so she could talk intelligently to programmers about systems development, and has remained tech-savvy ever since.

Filcon had been the local manufacturer of Converse shoes, and was into exporting. But when it became the Philippine licensee, the company’s focus shifted to marketing and retail, and Go had to expand her expertise accordingly.

In managing the company, Go says her strengths as a woman also come into play.

“Women are more serious when it comes to work,” she points out. “We’re more caring but we’re also more detail-oriented. We don’t look just at the surface, we see things in more detail.”

She adds: “I always emphasize that we have to be professional, especially when it comes to after-sales services for our dealers. We take care of their displays, the cleanliness of their stores, and we help them solve their problems.”

One of the things that also makes her happy is to see her employees improving their lives through their work in the company.

Her personal philosophy in life also impacts on her management style. Like many Chinese, Go considers herself both a Buddhist and Catholic, seeing no contradiction is practicing the faiths of her parents and her husband, respectively.

“The major teaching of Buddhism is karma—you reap what you sow,” she says. “It’s about inner discipline—you don’t lie, you don’t show off, you do good deeds and you might get good in return. Buddhism tends to be pessimistic, but I’m a positive person. I always look at the positive side of things. I can mingle with young people because I see their positive side.”

Running a lifestyle brand that is targeted at the youth market has its perks, one of which is staying young at heart.

Ironically, it’s now when she’s in her later years that she’s learned to relax and have fun.

“I can say that 40 years ago, I didn’t have fun at all,” she says. “Everything was about work, work, work. My children were still young, and the company was still growing, so I was focused only on my children and work. But now the company is stable and my children are grown. I can relax and enjoy the other side of life.”