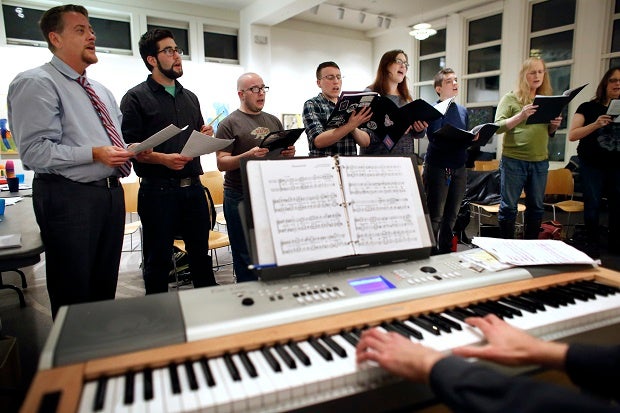 In this Oct. 7, 2015 photo, members of the Butterfly Music Transgender Chorus sing during a rehearsal at a church in Cambridge, Mass. The chorus is led by Sandi Hammond, a vocal coach who also trains members how to adjust their voices safely when they transition. AP Photo/Steven Senne

CAMBRIDGE, Mass., United States—In the world of vocal groups, where singers are separated along bold gender lines with little room for gray, the Butterfly Music Transgender Chorus stands out.

Founded last year in Boston, it’s one of the country’s first choirs reserved for transgender singers. It was created for those who didn’t feel welcome at traditional choruses, but it’s also one of few places where transgender vocalists can learn how to adjust their voices safely while they’re in transition.

At a recent rehearsal, chorus members couldn’t hold back smiles as they finished the folk ballad “Shenandoah.”

“Listen to how great you guys sound,” said Sandi Hammond, their conductor and the group’s founder. “Look how far we’ve come.”

In recent months, the chorus has performed at private concerts around Boston while it prepares for its first public show next spring. Despite a discreet start, it has struck a loud chord: As new transgender choirs form across the United States, some have credited Butterfly Music as their inspiration.

“In the beginning, it was exploratory,” said Hammond, a Boston vocal teacher who isn’t transgender. “I think I underestimated the value of what we were doing.”

Through the choir, its members are fighting an often overlooked problem in the transgender community. When they transition, many speak and sing in a higher register to sound more feminine, or deeper to sound masculine. Both can damage the vocal cords. But living with a voice that doesn’t match their appearance can trigger deep depression.

“People will begin to develop social anxieties; they run into discrimination and other problems,” said Ruben Hopwood, coordinator of the Transgender Health Program at Fenway Health, a community health center in Boston.

To help, Hammond has blended speech training into weekly rehearsals, and she connects singers to outside experts.

“She’s helping people alter how their voices sound to be more in line with their gender identity, which is relieving some of the stress that comes with that,” Hopwood said.

It took only a few weeks before Laurie Wolfe, one of the first to join the choir, could speak in a higher register.

“That was mind-blowing,” said Wolfe, an activist who lives in Somerville, near Boston. “It was a joy. It was like I was hearing this woman that I might have been.”

Some join the choir with little singing experience. Others are there to rediscover their ability.

Kit Johnson sang as a soprano in college vocal groups, but the testosterone treatments that deepened his voice during his transition also robbed him of vocal control. Johnson remembers hearing notes in his head but growing frustrated when different ones came out.

“This chorus has really helped me learn how to use my voice, how to sing with my voice changing, and how to do it safely,” said Johnson, of Winchester, Massachusetts. “I feel like I’ve learned how to sing again.”

Butterfly Music is believed to be the second transgender choir in the country, following the Transcendence Gospel Choir, which formed in San Francisco more than a decade ago. Others have recently started in Chicago, Los Angeles and Atlanta, where a group called Spectrum said it was inspired by the Boston group.

Hammond doesn’t divide singers into traditional ranges like alto or baritone, which are usually separated by gender. Instead, singers split into high, middle and low voices. As their voices change, they can bounce around ranges.

“It’s a little bit musically unpredictable, and that’s by design,” Hammond said. “For me, it’s the right thing to do. It’s like we’re creating a new sound.”

Butterfly plans to unveil its sound at a public debut on April 9 at First Church Boston, a Unitarian congregation. Since it raised $12,000 online to launch, the chorus has grown to more than 20 members. It’s now raising money to expand again.

Choir members say it’s a departure from heavier events that gather the transgender community, like support groups, political rallies and an annual day of remembrance for those who have died. This takes a different tone, Wolfe said.

“So is there joy in this? Of course,” Wolfe said. “We march for our rights, we honor our dead. Now, we sing.”