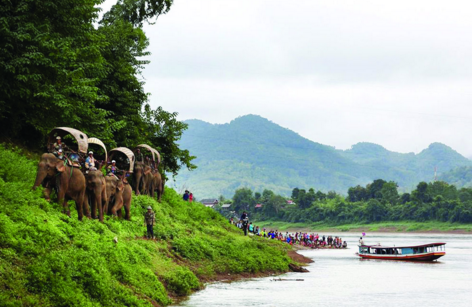 After spending 45 days travelling patiently through the jungle and local communities, the elephant caravan finally made its way into Luang Prabang to celebrate the historic capital and also raise awareness of elephant conservation issues in Laos.

Some 12 elephants, their mahouts and almost 40 officials had been travelling since October from the two districts of Paklai and Hongsa in Xayaboury before they reached Luang Prabang on December 6 to mark the 20th anniversary of the town’s World Heritage Site listing on December 9.

The elephant caravan reached Luang Prabang after walking 600 kilometers through the sun, rain and occasional cold weather to meet another eight elephants including a white elephant in Luang Prabang province.

After meeting up, five of the elephants continued on to participate in an elephant baci ceremony in Luang Prabang.

Then, the caravan of 20 elephants set off from the That Luang esplanade to Vat Xieng Thong, a distance of about 1 kilometer. After that, all the elephants participated in a baci ceremony.

“The caravan is also promoting tourism in the northern provinces of Laos, especially Luang Prabang and Xayaboury, with a view to elephant conservation in the future,” an organizer said.

The caravan was organized by the Lao Elephant Conservation Centre in Xayaboury province, which is a non-profit initiative in support of the conservation of the Asian elephant, aiming to raise public awareness, both in Laos and internationally, about the threats to the Asian elephant and to the rainforest, its natural environment.

The elephants marched across the length of Xayaboury province, an area known as the cradle of ‘Lao elephant culture’. The province shelters 75 percent of the current national elephant population. The march symbolizes a call for help from Lao elephants to the citizens and governing bodies of Laos.

The caravan was accompanied by theatrical and musical performers as well as educational staff, making it a kind of multi-cultural roadshow.

There were daily public performances to engage local residents and educate children about elephant conservation.

As the elephants made their way to Luang Prabang, an educational program informed local communities about the history of these great beasts in Laos and the need to conserve them.

“Our travels with the elephants were exhausting and we encountered obstacles such as rain, cold weather and mosquitoes but we did well to reach our goal, thanks to the medical team, especially the veterinarians,” one of the mahouts, Mr. Long Sivilay said.

“When we reached Chomphet district, Luang Prabang province, everyone felt relaxed, including the elephants, which had the cradles removed from their backs,” Mr. Long explained after taking his elephant to eat grass in a small forest 15 kilometers from the center of Luang Prabang.

Even though it was a long journey, Mr. Long and the other mahouts were pleased to be a part of the Luang Prabang celebrations and hoped the caravan would help raise awareness of the importance of elephant conservation and the long history of elephants’ connection to the Lao people.

Mr. Long became a member of the Lao Elephant Conservation Centre two years ago and since then has seen a change in the mahouts’ behavior, including in his own family.

These days, he said, they take better care of their elephants. In the past, he said, the elephants were assigned to long hours of hard labor and as a consequence they did not reproduce, causing the population to decline.

“Since I have been associated with the center, I have a salary to take care of the elephants and I am better educated about the importance of feeding elephants,” Mr. Long explained.

Mr. Long said he was very happy to see children and villagers enjoying watching the elephants as well as asking questions about them.

Mr. Long now hopes that his sons will take care of the family’s four elephants because they can be a part of conservation efforts as well as attend festivals but it can’t happen without the support of the center.

“I see a bright future for elephants if villagers and especially children understand the importance of their presence in Laos,” said a performer with the Khaoniew troupe who joined the caravan to raise awareness of conservation in local communities.

He explained that his team had followed the caravan since October from Xayaboury to Luang Prabang to help build awareness among rural people about how to live with elephants joyfully and promote their conservation.

“Our acting sought to follow the Lao Elephant Conservation Centre’s ambition to communicate with children and villagers more easily and build their understanding on the issue,” he said.

The actors were pleased to see that children and villagers joined in their performances and that they had been part of the celebration of the 20th anniversary of the World Heritage listing of Luang Prabang.