When Robbie and Peachy got engaged in Edinburgh | Inquirer Lifestyle 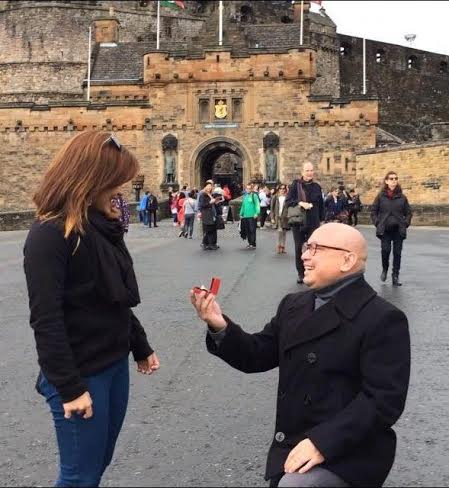 On his knees: “They made everyone pause for a picture, then Robbie knelt,” recalls Atilano. “I thought he was going to tie his shoelace. Then suddenly there was a ring in front of me!” ALL PHOTOS BY JONJON MARTIN

When Robbie and Peachy got engaged in Edinburgh

Robbie Guevara and Peachy Atilano first met at a Repertory Philippines summer workshop in 2007. He taught a class on musical theater and she assisted.

“At the end of the showcase recital, I joked that she was my  ‘new girlfriend.’ Little did I know that I was going to make that real!” says Guevara, laughing.

“It wasn’t difficult to get  attracted to her,” he adds. “She’s talented, very cute and pretty, and had a bubbly personality that I had never encountered with any other girl before.”

Atilano has a slightly different recollection. “I was really scared of him because he was so sungit. But when I got to know him more, I can say that he’s really a kid at heart.”

They became a couple for the next eight years. Last summer, Guevara decided to pop the question when 9 Works Theatrical (9WT), of which he is founding artistic director, took its first-ever international company outing to the United Kingdom.

“Edinburgh is my most favorite city. I find it really beautiful. When our group got to Edinburgh, I knew it had to be there,” he says.

He secretly signaled his friends and they went through the motions of posing for a group souvenir photo with the castle as a backdrop. “The phone was already set to record in video,” he says.

Atilano was excited to get to the castle, walking ahead of the group. “They made everyone pause for a picture, then Robbie knelt. I thought he was going to tie his shoelace. Then suddenly there was a ring in front of me!”

Guevara posted the video on his Facebook account to the joy and thrill of the theater community. Guevara asked, as he was about to place the ring on Atilano’s hand, “Right ba o left?”

“I was quite in shock for a while,” Atilano says. “I think I just froze trying to process what was happening. Eventually, we went to see the Scottish Crown Jewels with my own jewel on my finger.”

When he was still in college, Guevara went to the Rep office to buy tickets to a show and they were asked to audition. Two weeks later, he was cast in “Arsenic and Old Lace.”

“I got in with a minor role, got bitten by the bug and never left,” he says.

Atilano thanks Hollywood’s  Katie Holmes for her introduction to theater. “There was an episode in ‘Dawson’s Creek’ where she sang ‘On My Own.’ The performance wasn’t entirely moving, but I really liked the song and it got me hooked on musical theater.”

She went on to take summer acting workshops and started working as a professional actor after college. Her recent stage credits include 9WT’s “They’re Playing Our Song” and “Grease” (as a very funny Frenchy), and Trumpets’ “The Bluebird of Happiness.”

The pair has shared the stage in Resorts World Manila’s “The Sound of Music” and Rep’s “Mulan.”

“Mostly I’ve been her director in her shows,” says Guevara. When asked who the director is in their relationship, he replies, laughing, “I like to think it’s me, but she can get her way, too, most of the time. I have to admit I learn a lot from her despite her being much younger.”

Atilano says, smiling, “When we’re together, most of the time I’m the one who ends up scolding him for being such a kid. I like how smart his ideas are and how awesome he is as a teacher, a director, an artist and as a person.”

The workshop where Guevara and Atilano first met did not only produce a relationship between them, it also spurred Guevara to establish 9WT.

The recital for the workshop students was “The Wedding Singer,” based on the Adam Sandler-Drew Barrymore movie. He and good friend Santi Santamaria liked the show so much that they wanted to mount it on their own. Guevara would handle directing duties and Santamaria would be in charge of ticket sales.

Come 2016, the group’s lineup includes “Tick, tick… boom!” by Jonathan Larson, the creator of “Rent”; “American Idiot,” a jukebox musical using the music of punk-rock band Green Day; “The Wiz,” a soul/R&B version of “The Wizard of Oz”; and a new original Filipino musical.

9WT is also staging a coproduction of “50 Shades! The Musical Parody” in February and is holding its annual theater workshop Stage Camp in the summer.