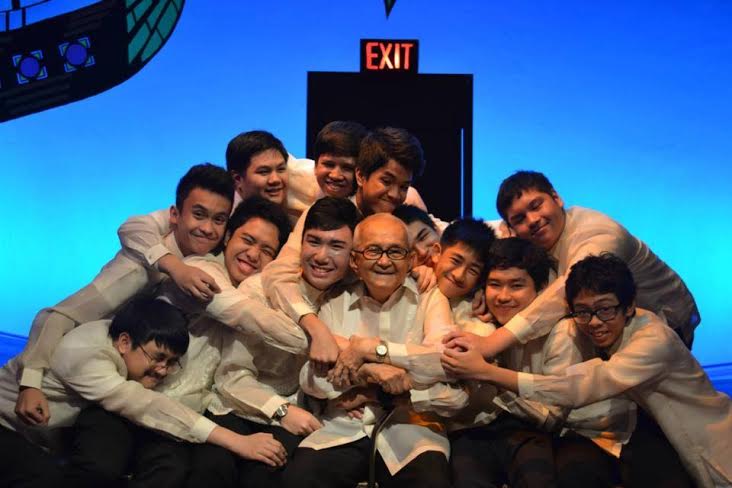 “Pagsi” with the incoming juniors of Dulaang Sibol in May 2014. “I tried teaching for a year and then another year, and it was beautiful. My life was full. I woke up every morning with eagerness and with a song in my heart and a glint in my eye. Before I knew it, I had become a teacher for 65 years.” ALL PHOTOS FROM THE ONOFRE PAGSANGHAN FACEBOOK PAGE

Onofre Pagsanghan, 88: ‘Let life be short, but let it be full’

The 88-year-old teacher walks slowly these days, sometimes leaning on the arm of one of his students. But the intensity of youth still blazes from his eyes—a mix of gentleness and that perpetual sense of wonder that is more usually found in those young enough to be his grandchildren.

Dulaang Sibol, the theater company that he established almost 50 years ago at the Ateneo de Manila High School, has helped form generations of leaders in business, art, culture and government. A few months ago, he received Philstage’s Natatanging Gawad Buhay! for his pioneering work in the country’s dramatic arts, which includes the mentoring of esteemed artists like playwright Paul Dumol and director Nonon Padilla, whom he still affectionately refers to as “very nice boys.”

But Onofre Pagsanghan, or “Pagsi” as he is fondly called, still wakes up at 5 a.m. to  prepare his lessons, teach his class and rehearse his 36-member Sibol crew for their next play. And at the end of each rehearsal, he and his team pick up their trash, remove their clutter, arrange the chairs and make sure the auditorium that bears his name—a tribute given him by a grateful Ateneo de Manila University  where he has taught for more than 50 years—is back to spic-and-span condition.

“There is no janitor assigned,” he says, chuckling. “We clean our auditorium. All of us talk about the dignity of manual labor, but how do you know if it’s really dignified and of importance? Once you start cleaning and recognizing that you are the one doing it.”

At an age way past retirement, Pagsi has no intention of slowing down, despite an accidental fall sometime ago that resulted in surgery.

“I’ve got to pour myself into something important, more lasting than the spotlight and applause,” he says. “Give and not count the cost. Is Christ present in what you do? I tell my students, ‘Your audience is your Christ.’ God is smiling at you—that’s the best reward you can get any day.”

The devotion comes from his Jesuit education, while the dignity can be traced to his poor Tondo-based mother who kept encouraging him as a child never to give up on his dreams, reminding him that his formidable intellect was a weapon that could overcome their circumstances. The Jesuits saw the potential in the boy Pagsanghan and granted him scholarships from high school to college; he graduated with a degree in Education at the Ateneo de Manila in 1951.

Now legendary is the often told tale of the condition given him by an American Jesuit in order to be accepted as a teacher when he applied for the job: to sleep every lunchtime in one of the university’s unused rooms, to boost what his superiors believed was his frail health. Pagsanghan manned up and survived the ordeal.

He didn’t back up from the next challenge years later, which was to chair the Filipino department. Unknown to them then,   his acceptance of it would lay the seeds for what would become Dulaang Sibol.

It was the mid-1950s and, as he puts it, “Filipino was held in very low esteem. Even the college students were saying,  ‘That’s only for the maids and the servants.’ I felt then that it was high time that we should change that. We had to dignify [the course]. Filipino nationalism [in the schools] was also beginning. I asked myself, how do I make Filipino interesting and come to life?”

Teaching drama and educating his students to put up their own productions became the key. Pagsanghan found himself reinventing the system. Theater was popular in Ateneo High School, and both young people and their parents and teachers would flock to the covered courts to watch amateur productions of “Hamlet,” “Macbeth” and “Cyrano de Bergerac” under the stars.

The first step was the formation of the Ateneo High School Dramatic Society, which would later be renamed Dulaang Sibol. The second was creating original material in Filipino; and the plays almost always had to have all-male characters, as there were no female students to play the female roles in an all-boys’ school.

Dumol was a senior high school student when he wrote “Ang Paglilitis ni Mang Serapio” and staged it under Pagsi’s tutelage, to immediate acclaim. Over the decades, it has become perhaps the most anthologized and performed contemporary Filipino play ever.

The widespread attention it generated told the public that something was stirring at the Ateneo High School. This was also roughly around the same period when Philippine theater was marking a milestone period with the establishment of professional theater companies such as Repertory Philippines and the Philippine Educational Theater Association (Peta).

The innovator in Pagsanghan saw that it was an opportune time for his own Dulaang Sibol to flourish. He would follow the groundbreaking “Serapio” with other landmark plays such as “Sinta” and “Sa Kaharian ng Araw.”

Still, certain things do not change. Even now,  Pagsi keeps to a tight crew of 36 people—12 each from the sophomore, junior and senior levels, with freshmen as aspirants. He is firm against increasing the roster, which he believes might lead to a more “de-personalized approach” toward his students. This drama pioneer counts himself a teacher first, a theater artist second.

“God made me and had a specific plan for me,” he says. “I tried teaching for a year and then another year, and it was beautiful. My life was full. I woke up every morning with eagerness and with a song in my heart and a glint in my eye. Before I knew it, I had become a teacher for 65 years.”

Teaching for him is more than just the passing of information or seeing to it that his young charges graduate from school.

“I have high hopes for my boys,” he shares. “Whether they want it or not, they will become leaders. For example, I have this student who comes for a political family who wants to be a mayor of Manila. He just might be. Maybe I can have a hand in some small way in the kind of mayor he would be later on, in terms of honesty perhaps. I hold tomorrow in my hands, with the kind of persons my students would become.”

He recalls being asked a difficult question by a De La Salle University education student during a forum where Pagsanghan was invited to speak. Had there been discouraging moments in his life that had tempted him to give up?

“I’ve given many talks from Aparri to Jolo, and I’ve never been asked that question,” he says. Discouragement had come to him “many, many times,” he admits. “Teaching is not easy. It’s like the parable of the seed and the sower. You never know what’s going to come out of the ground where you sow your seed. But you keep on sowing.”

One annual tradition that keeps him and his students grounded is an afternoon spent at the University of the Philippines Chapel during Holy Week. Those who do not go on vacation fetch him at home by 5:30 a.m., leave their car parked at the Ateneo grounds and walk the long road to UP. Pagsanghan inherited the “ritual” from his own Jesuit mentor, Fr. John Delaney, the Ateneo high school principal when he was just a young teacher.

Why the UP Chapel? “This is the only chapel where the altar is right in the middle of the circle,” he notes. “That’s the first thing that Fr. Delaney taught me: what to put in the center of my life. Some people go in a big way for money or political power. That’s not the kind of life I want to live.”

He recites a poem by Edna St. Vincent Millay: “My candle burns on both ends. It will not last the night. But, ah, my foes, and oh, my friends—it gives a lovely light.”

In other words, he says, “Let life be short, but let it be full.”