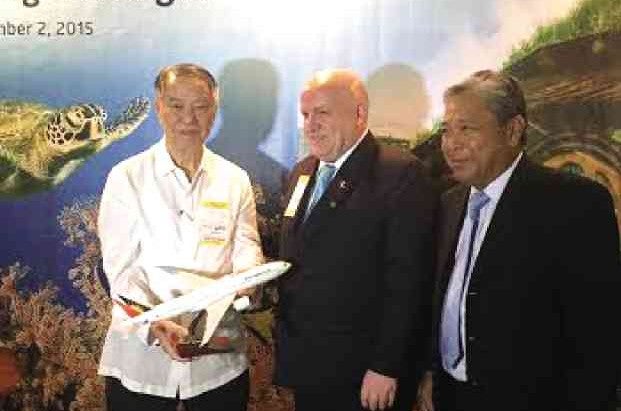 LUCIO Tan, PAL chair, presents a gift to New Zealand Ambassador to the Philippines David Strachan at Naia Terminal 2 before PAL’s inaugural flight from Manila to Auckland. With them is PAL president Jaime Bautista.

JAIME Bautista, president and COO of Philippine Airlines (PAL), aims to make the airline “five-star within the next five years” beginning with the addition of international routes and acquisition of more aircraft.

After nearly 75 years as the country’s flag carrier, PAL, also Asia’s first airline, flew for the first time from Manila to Auckland, New Zealand, via Cairns, Australia, on Dec. 2. It now flies to both cities four times a week.

The flight from Manila to Auckland on a 156-seat Airbus A320 had a one-hour stopover in Cairns.

The flight from Manila to Cairns took five hours and 30 minutes, while the one from Cairns to Auckland took four hours and 40 minutes.

Unlike before, travelers from the Philippines to New Zealand, and vice versa, no longer have to wait for as long as six hours in any of Australia’s international airports or transfer to another terminal to board a different plane to Auckland.

“Travel between Manila and Auckland has been cut by six to seven hours with the introduction of this service,” said Bautista.

The arrangement between PAL and the two airports also allows it to unload passengers in Cairns, and pick up new ones there en route to Auckland.

Apart from cutting travel time to New Zealand and the Philippines, the new flights allow New Zealanders and Australians living in Queensland access to PAL’s 30 domestic and 39 international destinations should they fly to Manila.

“If they wish, they could stay a few days in the Philippines before flying to their final destinations,” said Bautista.

Apart from direct flights to various parts of Asia, the United States and the Middle East, PAL has been flying to London where many New Zealanders have family and cultural ties.

Those flying from the Philippines can avail themselves of two tickets for the price of one. Provided they have an Australian visa, they can stop for a few days in Cairns before boarding another PAL flight to Auckland at no extra cost.

It works both ways. Those flying from Auckland and Cairns no longer have to make three- to five-hour stopovers in such Asian hubs as Bangkok, Singapore, Kuala Lumpur and Hong Kong to get to Manila.

Bautista is banking on the New Zealand market to ensure the new PAL route’s profitability, apart from Filipinos who now make up one percent of New Zealand’s 4.4 million population.

The New Zealanders’ presence in the Philippines also grew in recent years. In 2014, for instance, more than 17,000 New Zealanders toured the country.

“That’s a 17.26-percent increase from the previous year,” Apo said in her report.

“I’d rather not dwell on the details of our plans to keep the competition guessing,” said Bautista in New Zealand. “Our ultimate goal is to make PAL on par with the best airlines in the region.”

Just like hotels, airlines are rated by reputable industry bodies. Despite being a regional pioneer, PAL has yet to graduate from its three-star status. Bautista intends to change all that.

PAL recently acquired five Airbus A320s and two Boeing 777s to add to its fleet. It also recently ordered several Airbus A330s, to be delivered by 2017.

“Because of demand, there’s normally a two-year waiting period for such orders,” said Bautista. “We hope to transition to A330s if and when we decide to operate nonstop flights between Manila and Auckland.”

He summarized PAL’s three-pronged approach as it tries to catch up with the competition: Offer wider, more comfortable and reconfigured seats in both business and economy classes; embed each seat with on-demand in-flight entertainment; and eventually equip all planes with Wi-Fi.

“Our study revealed that 95
percent of passengers now bring their smart devices while traveling,” said Bautista. “For them to be able to use these devices, Wi-Fi connectivity is important.”

As for PAL’s tardy reputation, he attributes “95 percent” of it to such external factors as “airport congestion and acts of God.”

Internal causes such as maintenance problems, delivery delays and computer glitches contribute barely 5 percent to PAL’s failure to meet its schedule, he said.

“Delays mean additional expenses also for airlines in terms of jet fuel, maintenance and labor costs,” he added. “We don’t like delays. They cost us, for instance, $60 more for every minute we stay up in the air due to airport congestion.”

Since there’s nothing PAL could do about current congestion at Naia 2, it recently negotiated with airport authorities to divert the arrival of its early morning flights from the United States to Naia 1 instead.

“PAL flights to the United States would still fly out of Naia 2,” he said. “The agreement, which is subject to renegotiation, would last until March 24.”

This arrangement, though temporary, comes in handy as PAL plans to add flights to the United States. A Cebu-LA flight is also in the works.

Before the Christmas season is over, PAL will launch its first-ever nonstop flight, its 39th international destination, between Manila and Port Moresby, Papua New Guinea on Dec. 18.