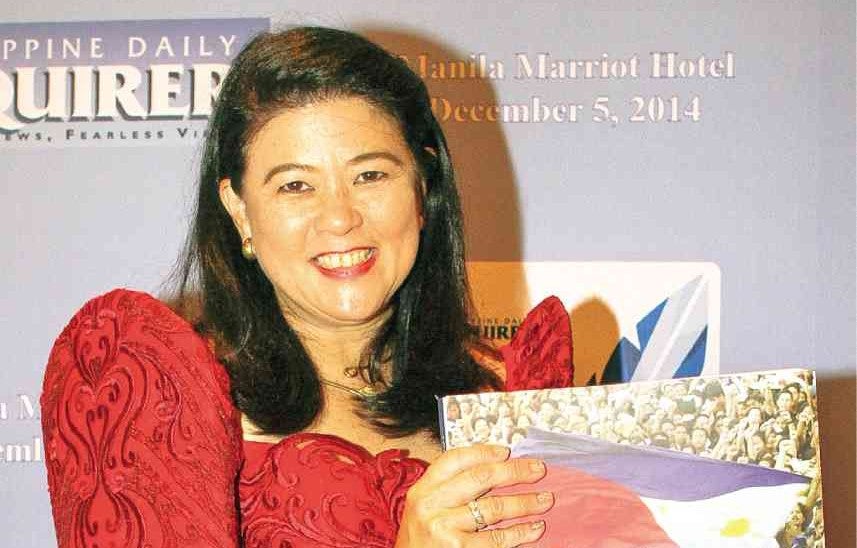 Guests laughed at her observation, but Prieto was seriously recalling the intensity of the Inquirer’s experience of covering the news since 1985, just before the Edsa uprising that toppled the dictatorship of Ferdinand Marcos.

“For 30 years, we mustered the courage to expose the ills of society… courage to be the voice of the powerless, courage to stand our ground no matter how unpopular it is,” Prieto said in a speech delivered at the launch of the commemorative book, “The Inquirer Story: 30 Years of Shaping History,” on Dec. 5 at the Manila Ballroom of Marriott hotel.

“Thirty years may be short for companies who have already celebrated their hundredth year,” she added. “Believe me, 30 years in the Inquirer is like celebrating 300 years.”

Much has already been said about the traumatic traffic jam that the Inquirer’s valued partners and other guests endured just to get to Marriott in Pasay City.

While Inquirer president and CEO Sandy Prieto-Romualdez had to leave her car and flag down a tricycle to get to the venue, Robina Gokongwei-Pe, senior vice president and group general manager of the Robinsons Retail Group, had to bear with the traffic in her vehicle for three hours as it inched its way from the Ortigas Center in Pasig City to the hotel.

Tessie Sy-Coson, vice chair of the SM Investments Corp., told Inquirer business editors that she was just nearby in Makati City but it still took her two-and-a-half hours to get to Marriott.

Ramon Ang, vice chair, president and COO of San Miguel Corporation, reportedly wanted to turn back due to the gridlock, but was prevailed upon by organizers to proceed to the event.

“Thank you so much for joining us,” Romualdez later told the guests when she led a ceremonial toast to mark the Inquirer anniversary.

“I know we really tested your love for the Inquirer to brave the traffic and to be here tonight. And this toast is very much a toast to you for being there with us through thick and thin,” she added.

Captains of industry were not the only ones who endured the traffic.

Sen. Grace Poe left her Quezon City residence at sundown. Traffic was a breeze until she reached the Villamor Air Base area where she spent two hours traveling the last 2 kilometers to the Marriott.

University of the Philippines president Alfredo Pascual came to accept the first copy of the Inquirer book that will be donated to the university’s library.

“Courage Beyond Words” was the night’s anniversary theme.

Prieto said the theme “gives poignant meaning to the very important role and responsibility that is expected from the men and women of the Inquirer.

A lot more to do

“We have witnessed the sweet passing of time, and many times we learn and in times we have been made aware that there is still a lot more to do,” she noted.

Courage, she added, is a main ingredient in the paper’s daily operations. She also emphasized the roles played by everyone involved in the reporting of the news.

“With our loyal readers, we have courage to endure pressure and courage to ride the tides of change,” she pointed out. “We wouldn’t be brave enough to do this without you—our valued readers, advertisers, dealers, forwarders, school partners, advocacy believers and even our detractors.”

Prieto said the Inquirer’s detractors played a key role in news reportage. “Every constructive criticism that we receive from you became our guiding light to serve you better,” she explained.

All motivations, Prieto added, have only pushed the newspaper to go forward and evolve. From a broadsheet, the Inquirer now reaches more people through multi- media platforms.

“It is our gratitude that we marveled at how the Inquirer has grown—from one media platform to 10, and from one million readers to 18 million viewers,” she said.

Romualdez also led the unveiling of the country’s first holographic stamp honoring the Inquirer, along with Eric Tagle, vice chair of the Philippine stamp committee, composed of representatives from the

Tagle noted that news writing and letter writing are similar—both are ways of expressing ideas.

At her turn to speak, Romualdez hinted at the dark time during the Estrada presidency when the Inquirer was on the brink of collapse after Estrada called for an advertising boycott of the paper.