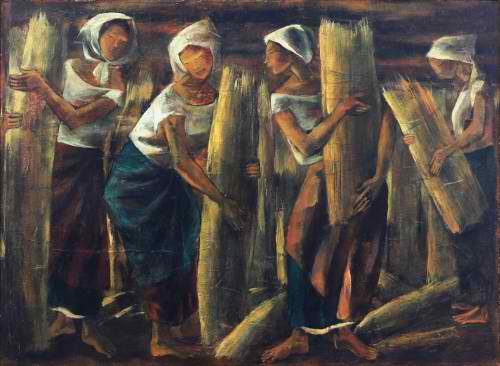 AT THE Kingly Treasures Auction 2015 of León Gallery, the highest-selling piece was Anita Magsaysay-Ho’s 1964 oil-on-canvas “Four Women,” which was sold for P23.94 million from a starting bid of P5 million.

The highest-selling contemporary work, as expected, was fetched by Ronald Ventura’s “In Memorial!”—P16,352,000— from a starting bid of P7 million.

Olazo’s 1982 oil-on-canvas “Diaphanous B-LXXVII,” which garnered P5.84 million, is now the highest-selling work by the late artist. The 9-foot high piece is also the largest Olazo work to be sold in an auction.

On the contemporary side, Jigger Cruz’s 2013 work “Blares of the Opposite”—rendered in oil and spray paint on canvas and wooden frame—was sold for P6.72 million.

Barrioquinto’s 2015 oil-on-canvas “Into the Fray,” hammered in at P6.72 million. It is now the highest-selling piece by the artist.

A significant piece by early-20th-century master Vicente Rivera y Mir, “Pauwi,” a 1933 work rendered in oil on masonite board, was auctioned off for P642,4000.

Meanwhile Jorge Pineda’s “Magpaparol,” which graced the cover of the catalogue, was auctioned off for P3,971,000. Starting bid was P800,000.

A very important piece by Ocampo, 1965 “Talking Birds,” came in at P5.26 million. The piece is rendered in oil on masonite board.

Botong’s 1944 oil-on-board “Landscape with Two Farmers” and Manansala’s 1971 work “Mother and Child” were both sold for P6.42 million apiece.

For the furniture, a Tinio-Gabaldon cabinet, built in the second quarter of the 19th century, hammered in at a whopping P15.77 million. The piece belonged to one of the progenitors of the Tinio family, the richest and most landed in Nueva Ecija.

The Sheraton Sideboard, made of narra and carabao bone, was bought for P1.05 million.

The glass-encased Encarnacion-De los Reyes Virgen bearing the statue of the Virgin Mary was sold for P1.28 million.