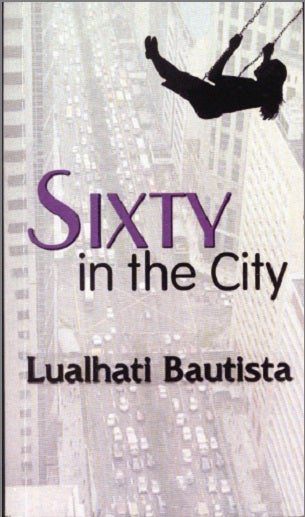 THE COVER of "Sixty in the City"

NO, THIS is not the Filipino version of “Fifty Shades of Grey,” although the three elderly women in Lualhati Bautista’s latest novel, “Sixty in the City” (Dekada Publishing, Quezon City), have their fair share of sexual longings and fantasies despite -or maybe because of—their sunset years.

Guia, Roda and Menang, good friends in their mid-60s, have realized that there’s more to life than being just wife, mother and homemaker. Living parallel lives, they nurse secret dreams and frustrations they now feel entitled to pursue by virtue of widowhood, a husband’s betrayal, and, in the case of Menang, doors opened by generous friends.

Despite their travails, Bautista’s women are consistently strong and street-smart and view their lot philosophically, often with self-deprecating good humor and the occasional ripe and salty pragmatism.

At her husband’s wake, Guia muses about a boring marriage endured for the sake of respectability, convenience and the children. That it was a marriage contracted by her parents to avoid family embarrassment did not help any. But it had its moments, she conceded, though perhaps not enough to offset the temptation of having an affair with a family driver some 30 years her junior.

Where was he now? Would he come to condole with her? Could they pick up where they left off? Did he still think of her the way she does, pining for more than the physical satisfaction of sex on the sly?

Did he love her, even just a little? Guia wonders. After all, didn’t he once say, when she had insisted that the lights be turned down because she was embarrassed about her abundant and sagging flesh, looks weren’t what he valued in a woman?   But why did he leave so suddenly? Was the heartbreak only hers?

But widowhood has its rewards, this housewife of many decades realized. Being finally released from a legally binding but tepid relationship meant being free to do what her husband had specifically forbidden: write poetry, a high school preoccupation that had gotten her in trouble and into this marriage in the first place. For that, she needs a room of her own, a private place to soak and marinate in her thoughts without her grown up children treating her like a ward and unpaid babysitter, as if every elderly women wanted nothing more than be surrounded by bawling grandchildren.

Roda, the corporate wife, meanwhile has to deal with her husband’s infidelity, carefully hidden through countless business trips and out of town conferences. Leaving the family home to maintain her self-respect, she is assailed by doubts cemented by decades of utter dependence on her husband. Could she live on her own? Even if she demanded monthly support or half their conjugal assets, what skills did she have to manage her finances to make them last till she croaked?

A chance meeting with a widower rekindles hopes of starting anew, but again she wonders: could a new relationship validate her bruised ego and put some starch to her soppy self-confidence? At her age, does she even have the guts to try? What if she made another mistake?

Menang, part-time masseuse to her two friends, finds doors firmly shut on her face as she struggles to support a disabled husband. The couple, impoverished migrants who fled to the city to find viable jobs, finds that affection may not nearly be enough to sustain a relationship hobbled by constant want.

Frustration, material deprivation, the exhausting struggle to make meager means meet, can leave little room for enjoying life beyond survival. How does one go beyond mere sustenance to having just a bit of respite to savor what may be her husband’s final years?

The women may live separate lives but like close friends, they find themselves sucked into each other’s orbit where they share loss, grief, heartbreak and food, always with leavening laughter.

Filipino women of all ages will find much to identify with in the novel, written as it is in conversational Filipino and within a milieu as familiar as one’s neighborhood. The three women’s lives too are a fleshed-out treatise on the many aspects of being born female in a society that, despite rapid tech changes, remains nailed to unchanging expectations about women when they approach the twilight years. Alas, as Guia, Roda and Menang realize, fertility, good looks and youth continue to be the impossibly narrow yardstick by which most women are measured.

Fortunately, Bautista’s women are fighters and doers who cheerfully break through life’s rigid parameters. As is typical of Bautistas’ novel, the pathos are always tempered with earthy humor, the women doggedly determined to overcome, and the prose a delight to quote and remember.

“Sixty in the City” is available at Bookay-ukay at Maginhawa Street, Teachers Village, Quezon City ; Solidaridad Bookshop at Padre Faura, Manila; selected branches of Pandayan Bookshop, or through lualhati [email protected] You may also send the author a message through her Facebook account.