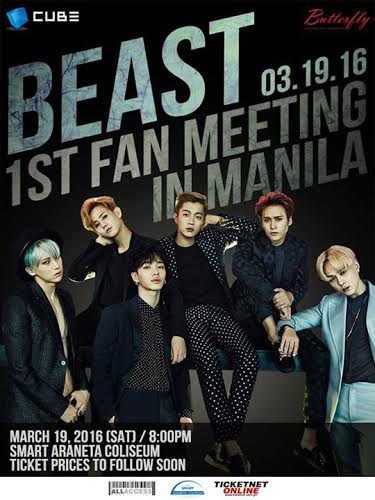 THE LONG wait is over.

Beast, arguably the best Korean pop (K-Pop) music act in the world today, is finally making its return to the Philippines.

Beast will hold a “fan meeting” on March 19, 2016, at the Smart Araneta Coliseum in Cubao, Quezon City.

The event will be made possible by Cube Entertainment, Beast’s agency, and by Butterfly and All Access Productions from the Philippines.

According to All Access Productions managing director Doc de los Santos, the event will be all about fan interaction in which the audience will not only get to enjoy the impeccable and powerful live performance of Beast, but even play games with the members, pose for photos and more.

The response via social media has been very good, De los Santos said.

“Filipino fans have really been clamoring for a long time to see them,” he added.

Making the fan meeting all the more important is that it could very well be the last public activity of the group before members enlist in the Korean military for compulsory national service, said De los Santos.

Fans will have the opportunity to vote via social media the songs they want to watch Beast perform.

Who knows, Beast will even sing a Tagalog song, the promoter added.

Pre-selling for tickets will be on the first week of January.

The last time the sextet was in the Philippines—in 2010—it was just a rookie act.

But on March 19, 2016, Beast will return as a multi-awarded K-Pop legend with a fan base reaching as far as Europe, North and South Americas, Asia Minor and the Middle East, even Central Asia.

In Southeast Asia, Beast is firmly entrenched as a musical act against whom One Direction and Justin Bieber combined could hardly measure.

Beast is highly acclaimed for the variety and brilliance of its discography, whose songs the boy band performs flawlessly on stage, often sounding better than the recording.

Beast’s vocalists Jang Hyunseung and Yang Yoseob are considered among the best singers in the K-Pop world.

In 2013, Grammy-winning soprano Jo Sumi asked Yang Yoseob to sing a duet with her in a concert. This year, Yang was the only K-Pop star the diva invited to record for her new album.

Beast members are also known for their good looks, with leader Yon Dojoon often called in the Korean media as the “national boyfriend;” dancer-singer Lee Kikwang having a million Twitter and Instagram followers; and youngest member Son Dongwoon, who had stayed for a year in the Philippines prior to Beast to learn English, often called as “son nam shin” or a “god-man” and a “work of art.”

Aside from their charismatic stage presence, Beast is also well-loved for its humor and humility.