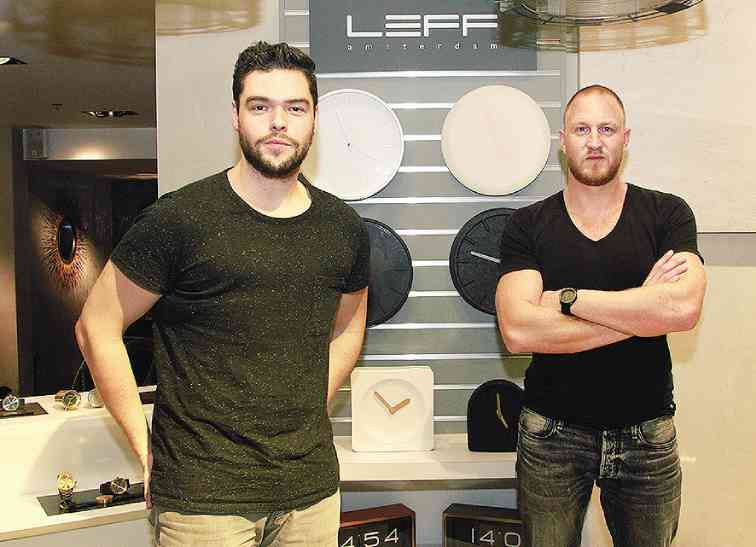 How Dutchmen reinvent the clock

WHO NEEDS a clock to tell the time when one’s mobile phone can do the job?

Trust the Dutch to reinvent the proverbial wheel, or in this case, the clock. Leff Amsterdam, a design firm that specializes in timepieces, maintains that beyond function, a clock is a work of art that is displayed on the wall like a painting or a modern sculpture on the shelf or desk.

At the Kenneth Cobonpue showroom, two wall clocks grab attention for their minimalist appeal. The faces are round and the fine bars take the place of numerals. The design eschews the classic rods that determine the seconds and minutes.

On closer look, the viewer will appreciate the clean design and material. The face is made of PET (polyethylene terephthalate) or recycled felt.

“If you look at it, you can still check the time, but it is meant to be something beautiful in your space,” says Leff cofounder Arno Ruijzenaars.

Leff timepieces use the Japanese Miyota movement, whose reliability and accuracy are on par with Swiss technology.

“Leff” means heart in Old Hebrew. Although Leff Amsterdam connotes in the heart of Amsterdam, in Dutch “leff” means doing things that haven’t been done before.

Ruijzenaars recalls that when Leff started five years ago, the market for clocks offered some beautiful German designs. There were also works by Arne Jacobsen of Denmark and the classics.

“For a long time, there was nothing,” he recounts. “Then there were a lot of cheap brands. We thought there was a very interesting gap and that there was a lot of space for creativity. We could approach really top-level designers who could come up with some new classics for us.”

Leff’s breakthrough product is the Brick Clock. House designer Erwin Termaat paid homage to the flip clock, which tells the time on a display mechanism that shows changeable numbers. The Brick Clock is admired for its welded, hand-brushed copper casing with a plastic face for flexibility of the split-flap display.

“I like the technology from earlier times,” says Termaat. “But if you reproduce a vintage clock in the style of the ’50s to the ’70s, they will date that era. What I like about the Brick Clock is that it’s quite neutral to the design. It doesn’t really remind you of the era where it came from.”

He adds: “I always find timelessness in a product. People cannot really tell in which period it was designed, so it stays interesting for a very long time. You can achieve that by using simple shapes and good standard materials.”

One of Leff’s innovations is the Tube series that pushes the boundaries in clock design. The company collaborated with design star Piet Hein Eek, whose claim to fame was transforming scrap wood into high-end designs. Eek’s clean and crisp style complemented Leff’s aesthetics.

His Tube series consists of a watch face encircled by notched rings with mechanical protrusions that indicate the time. Eek brought innovation to the watch and the clock by exposing their basic components and using them as the design.

“He came up with a design, which is like an extruded ring that gives a complete new image of a dial,” says Ruijzenaars. “When he showed it to us, we could believe that it had not been done yet because there are so many watches and clocks.”

Ruijzenaars recalls checking watch yearbooks and the Internet, and acknowledging Eek for his brilliance. “He can still come up with something which is really new, while it could have been made a long time ago. So that’s when we made this little clock, and then when the clock was finished, we felt it was a little bit lonely.

“That’s why we designed it to make a little Bluetooth speaker with it. You just connect with your tablet or your phone and then, you know, you have this on your bedside and you have a nice speaker next to it.”

The speaker is made of solid stainless steel that provides good sound quality. The Tube Clock and Audio catered to a wider market of audiophiles.

The Tube Clock was such a success that Eek created a wristwatch version, made of the minimalist face and a cool version with either steel or a leather strap.

Leff Amsterdam also integrated furniture into a timepiece when it collaborated with Dutch designer Richard Hutten, who espoused the “no sign of design” philosophy. In his trademark conceptual style, Hutten created the “Mirror/Clock,” a standing slab of a white oak-framed mirror with a clock on one end. The dial and the position of “12” can be changed, depending on whether the clock is displayed horizontally, vertically or inverted.

The company has come a long way. Ruijzenaars recounts that when Leff Amsterdam was established in 2011, the goal was to produce design-oriented watches.

“The brand is not only going to do timepieces, but we will split it between time and sound, because we would really love to work on the audio project. We are already working on some other really cool things, which will probably be launched in the next Salone de Mobile in Milan,” he says.

On the future of design, Termaat notes: “More technology will be integrated in the products. Many products have a connection with an app, like with your phone, even washing machines. You can let them work by using your phone and setting the settings. On the other hand, I think people always like to have a bit of craftsmanship, so there’s technology on one side and human artisanship on the other.”