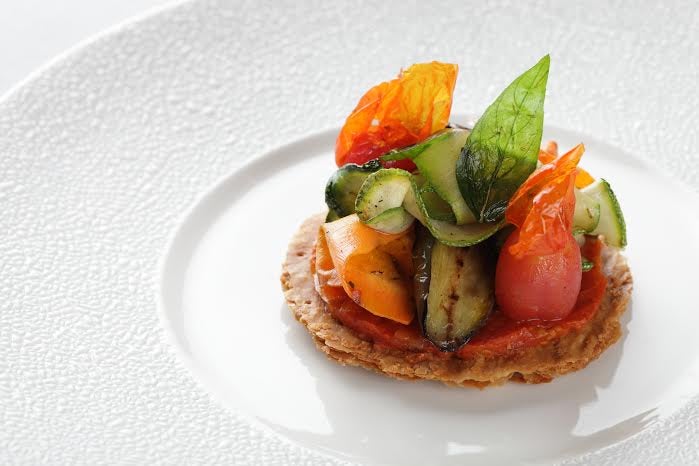 It’s perfectly understandable when a diner does a double take while poring through the new menu at Peninsula Manila’s signature restaurant, Old Manila.

Under Mains, it lists several items as “perfect for sharing.” This is, after all, a French fine-dining affair, not a brasserie. The concept of sharing portions just seems incongruous to a fine-dining setting.

But that is just the first of the many surprises that the new chef de cuisine, Bertrand Charles, has in store for connoisseurs of fine food in Manila. The 27-year-old French chef was hired to give the Old Manila menu a total overhaul, and he went to town doing just that.

“I like to surprise and do the unusual,” he said with a boyish grin. “It’s too bland to go out and eat if it’s always the same. Here we have the potential to have fun.”

The idea of sharing comes from reminiscences of his childhood, when his architect-mom lovingly made food served for dinner every day without fail. It was the only time the whole family could share a meal, such that his father made sure his four children were all at the table for supper.

At a recent intimate dinner, Charles served Irish prime beef rib eye and grilled whole Brittany Atlantic blue lobster on a cutting board for our party of five. These aren’t the items listed under sharing, but he said his kitchen is flexible that way. Fish and steaks are cut à la minute, for instance.

Not hot on sharing? Not a problem.

He gave us a passionate speech on why he prefers grass-fed Irish beef over, say, the much-hyped Angus: For one, he said, the “irony,” almost gamey flavor of the former is the true taste of beef, versus the sweeter meat of the corn-fed Angus.

He likes to cook simply, drawing out the natural flavors in his ingredients, an approach he learned early on from his mother and, later, from one of his mentors, the two-Michelin-starred chef Jean Pierre Vigato.

“This is how I know how to do things, to have the consistency of the product,” said Charles. “This is what I was trained to do. It’s not always easy to explain to people that this is a bit more expensive. But I’m targeting guests in Manila who like to eat, who have traveled around the world and know what good food is, and have the palate to see the difference.”

Charles also brought in his signature dish, a stunning East-West medley of Granny Smith apple jam with ginger and almonds sandwiched between a raw tuna and pan-seared foie gras. It was the same dish that bagged him a coveted post at Four Seasons Anahita Resort in Mauritius, where he opened Vigato’s restaurant at age 19.

He brought it with him all the way to the Four Seasons George V in Paris, to La Mamounia in Marrakesh, then Sandylane Hotel in Barnados before coming to Old Manila.

His youth has never gotten in the way of his work, said Charles. “I’m proud of the staff I have here. I have a strong team. I’m younger [than most of them] but in Morocco, I worked with an even older staff. It’s not about age. I only care if you’re motivated to learn and that’s what I have here.”

Born near Dijon and raised in Gabon, where his parents moved for work, Charles returned to France for culinary studies in Nancy. He excelled in the kitchen, earning the highest score in France with 19.8 points of 20.

“I lied to my parents and didn’t apply [for higher studies]. I was better behind the stove than behind the desk,” he said with a laugh. He was then 17. He had been working at kitchens for free since age 15—first at a Moroccan restaurant for a year, then at a fusion restaurant owned by a Japanese chef.

Armed with just chutzpah, the teen walked to the front desk of Hotel de Crillon in Paris to present his resumé to the two-Michelin-starred chef Jean-Francois Piege, who wouldn’t see him.

Charles walked away dejected, when his phone rang. It was Piege who said, “I don’t want to know anything about you. You’re engaged.”

He went on to work under Piege for two years. When Charles decided to move on, Piege arranged an interview for him with Vigato, who in turn took Charles under his wing. It was Vigato who taught him “simplicity and honesty” in his dishes, and that sense of wanderlust, which brought him to Manila after suffering cabin fever in tiny Barbados.

After Mauritius, Charles also worked briefly with Alain Ducasse as part of the famous chef’s personal team of cooks for private events during one Grand Prix season in Monaco.

“We would cook for four people, roast chicken with haricot vert,” he recalled. “But if you’re cooking [just] roast chicken for Alain Ducasse, it has to be perfect! It was a good experience.”

After that, he went back to Paris, at the Four Seasons George V, before taking a year off from 14-hour workdays to fix the apartment he bought. He taught home cooks, after which he was once again sent to take charge of Vigato’s French restaurant at the palatial La Mamounia in Marrakesh.

“I’m not the best cook in the world,” Charles said. “I just have a dedication for cooking. I respect the product… Some restaurants have beautiful views. Old Manila has no windows. I don’t want people to come here for the view but to have good food. Our focus is on the food and service, nothing more, nothing less.”