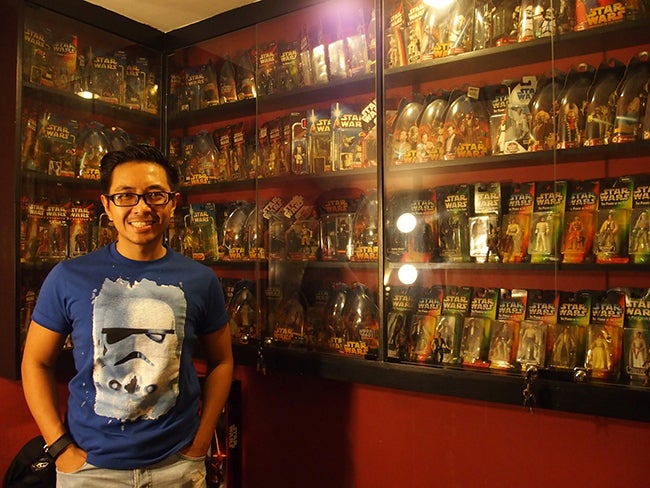 THE 40-YEAR-OLD lawyer with his “shrine”

Lawyer Ryan San Juan has a secret only his family and closest friends know about. And much like the mystery surrounding Kylo Ren’s identity in the new “Star Wars” movie, Ryan’s secret will nonetheless be revealed.

Upon entering his home in Pasig City, everything seems normal enough: plants by the gate; dogs barking; bikes parked at one corner of the garage.

But the tin cans with pictures of lightsabers and galactic battles on them atop the kids’ craft table—and the discreet nod to Naboo apparent in the arches of their living area—betray a hidden passion.
This is no ordinary house, but rather a fully armed and operational home of a “Star Wars” fanatic. Ryan, who turned 40 last month, has been collecting “Star Wars” figures for about half of his life. He has been a fan of the film franchise since he was a kid.

“In 1984, my dad took me to watch ‘Return of the Jedi’ in Greenhills Theater,” he recalls. “It was my first time to see it on a big screen.”

His passion didn’t become apparent until the late 1990s, though, when his then-girlfriend (now wife), Vannee, soon found out what she was getting into. “I told her about the new movies, that I was so excited about them,” he says. “And then she saw that I was buying toys. She was like, ‘You’re so old na, why are you buying toys?’ And then my collection grew and, before I knew it, in a couple of weeks, I bought about 20!”

He didn’t plan for his collection to grow, he explains, pointing out that he keeps his main collection in the attic inside shelves with glass doors. It almost looks like a store display.

There are more items lined up in various corners, using up every available space of the attic and the walls leading up to it.

A lot are still stashed away in his luggage, and newly purchased ones are still in the paper bags they came in.

He keeps his collection in mint condition, but he also has a lot of loose figures. When his children were born, he says, he learned to start buying two sets—one for him to keep and one for the kids to play with.
The first and only “Star Wars” toys he had when he was a kid, back when people had to find them in Greenhills or bring them home from abroad—Luke Skywalker in Hoth attire and another of the Emperor’s Royal Guard—were gifts. When the “Star Wars” franchise was rereleased in 1997, Ryan began buying and collecting figures, starting with the Special Editions.

“In exchange for good grades, I would ask my mom, ‘Can I buy this? Can I buy that?’ College na ’to, ha!” he recounts, laughing.

From then on, every time there’s a new release, he just had to have it. His collection primarily consists of three-and-a-half-inch figures, although he also has a few six-inchers, and some vehicles and starfighters like the X-Wing and a landspeeder, mostly from the Kenner and Hasbro lines.

His favorite among his collection is the “Star Wars” Power of the Force Toy Expo Exclusive Boba Fett figure which bears the signature of Jeremy Tulloch, the actor who played Boba Fett.

A close second is his 12-inch Queen Amidala Red Senate Gown doll, which he asked his dad to get for him.
Asked if there’s any that got away, Ryan says, “Over my dead body! Slap a ‘Star Wars’ logo on an apple and I’d probably buy it.”

The only thing that’s keeping him from buying anything and everything “Star Wars” is that he knows his priority is family. In fact, he refuses to get into eBay and online shopping because he’s worried he might spend a lot of money on them. But he appreciates hunting for rare finds: “You go to all the different toy stores, you befriend everyone … it’s more thrilling.”

It doesn’t hurt that his brood is also now into it, so much so that it has become a family affair. While Ryan’s obsession with “Star Wars” hasn’t really rubbed off on his dear wife Vannee—incidentally a baker who was featured in INQUIRER Lifestyle’s “Best Desserts 2” for her Blue Cheese with Honey Cake—she has somehow supported his hobby. In fact, for every occasion, she would have one special gift and one “Star Wars” gift for him. But Ryan says he has become more restrained than his wife when it comes to buying “Star Wars”memorabilia. He makes sure to remind his kids, the eldest and the youngest of whom are likewise obsessed with film merchandise, that he amassed his collection “over a number of years. It’s not just one splurge.”

Close friends who know about his hobby would also gift him with “Star Wars” items, happy at the thought that these would enhance his collection.

He insists, however, that he didn’t force his hobby on their children.

When Christiana was born, he bought her a collection of Disney Princess dolls. But she mostly ignored them. Later, she started buying her own “Star Wars” items and has even started reading the books.

But while Ryan feels more like a Jedi, Christiana, now 12, thinks she’s more of a Sith (she likes the bad guys). Ryan’s favorite character is Luke Skywalker, while Christiana has a crush on Han Solo.

But for the “Star Wars: The Force Awakens” Disney premiere at Imax in SM Mall of Asia last Dec. 15, she dressed up as Obi-Wan Kenobi.

“She was excited because the 501st Legion was also there.” Ryan’s youngest child, 8-year-old Carlos, has also gotten into his father’s passion. He would watch the movies over and over.
And for his first birthday, the whole family dressed up as “Star Wars” characters. Ryan’s own father even modified the toddler’s stroller to resemble a landspeeder. But while second child Clarissa, 10, has no interest in it, and takes after her mom in her girly ways, the whole family goes out and enjoys the hunt for “Star Wars” figures together. “I really need a bigger house,” Ryan says. “I plan to build a bigger room.”

He adds: “There’s a continuing threat that if we run out of money, Vannee’s going to sell my collection. She says she’s going to auction it off. I hope she’s kidding!”