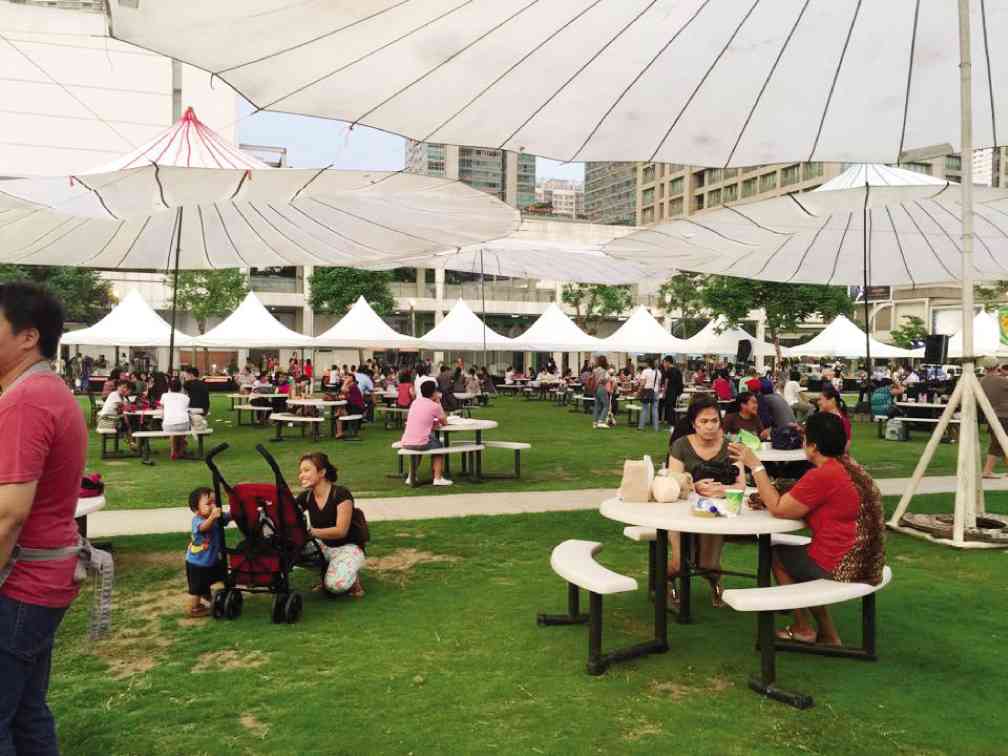 THE GREENFIELD District attracts families to have a picnic at the park tables with food from theweekend market stalls. FACEBOOK.COM/GREENFIELDDISTRICT

Viet Taste is one of the more popular food stalls in the ongoing weekend market at Greenfield District in Mandaluyong City. It’s operated by a group of youthful entrepreneurs, cooking the food themselves and serving it with a winning smile and enthusiasm.

These friends are native Vietnamese; a few of them are students at various colleges in Manila while the others already have day jobs here.

They set up the stall whenever there’s a weekend market at Greenfield District. Most of their profits are coursed to their favorite charities.

“This market gives us the chance to prepare the food we love,” says Viet Taste co-owner Peter Kha. “But we hope we can open our very own restaurant by next year.”

As with many weekend markets, Greenfield District entices foodies with items not normally found in conventional supermarkets. A nearby stall operated by Le Zez Naturals sells ingredients for its Instant Moringa Soup, notably malunggay leaves, which the vendor says can treat a number of illnesses.

For something from across the Asian continent, the stall of Habib Persian Cuisine is a haven for shawarma lovers. Its food stall is an extension of its elegant restaurant at the nearby row of clubs and dining places called The Hub.

Christmas shoppers looking for unique gift items can check out classic vinyl records on display at one of the stalls. Others can view a collection of stylized paintings depicting the old thoroughfares and landmarks of Manila, many of which no longer exist.

What one sees in these paintings is a sharp contrast to the venue of this makeshift gallery. The place is surrounded by modern high-rises. Moreover, Greenfield District is located right at the heart of Mandaluyong’s commercial area, which stretches from Ortigas Center to the north and right down to the city’s south border, the Pasig River.

Greenfield District is yet another mix-use “eco-system,” a complex of office buildings, residential condominiums, hotels and shopping malls. Developed by Greenfield Development Corp., Greenfield District covers a sizable area that stretches from the corner of Edsa and Shaw Boulevard to Pioneer Street.

Much of the land it stands on was used by pharmaceuticals company Unilab. The family that owns Unilab also happens to own Greenfield. One of its first projects on this site was the Edsa Central Mall, which connects to the Metro Rail Transit (MRT) station on Shaw Boulevard. Behind this mall is the open space of Greenfield District and The Hub.

Commuters and motorists who regularly drive past this area on Edsa would be pleasantly surprised to stop by and take a look at the place. As it happens, Edsa Central blocks the view of everything that’s new.

Across the open space is a high-rise condominium, Twin Oaks Place. It’s a far cry from the chaotic jeepney terminal that used to occupy this space.

“A few old commercial buildings and a medium-sized mall used to stand across the open space, but as you see, we’ve torn them down and built high-rise condominiums in their place,” says lawyer Duane A.X. Santos, executive vice president and general manager of Greenfield Development. “A lot of the other old buildings are also scheduled to be torn down as we plan to build a more modern and trendier mall, in place of Edsa Central.”

But Greenfield District, insists Santos, isn’t just about building modern landmarks. Open, breathing space is going to be one of its major attractions. He says the open space will be extended by another block, pointing out that the present park is just half of what the total open space will eventually cover.

“Roughly 40 percent of the district has been allocated for open spaces, pocket gardens and tree-lined roads,” he says. “All power and telephone cables will be placed underground as with most of the parking areas for the commercial establishments. Greenfield District will have the biggest open space in the city.”

The district is also going to be the site of a number of BPOs and more residential buildings are being developed. “It’s going to be a self-contained community,” Santos says, “where residents and office workers can just walk across the street and go shopping, dine in a fine restaurant, or have a quick lunch at the weekend market, or just have a stroll in the park.”

Apparently people are starting to discover the place; families are seen having a picnic at the park tables and chairs and enjoying the food they bought at the weekend market stalls. A jazz band alternates with a choir performing Christmas carols at a stage adjacent to the giant Christmas tree. The music makes the picnic a more memorable experience.

While Santos says it’ll take a few more years before Greenfield District is completed, both The Hub and the weekend market already have a built-in customer base comprised by the occupants of the finished residential condos.

It also attracts the commuters passing through Ortigas Center to board the bus or the MRT at the Shaw station. Santos expects a lot of people based at Ortigas Center and the other nearby commercial areas to spill over to Greenfield District.

“Greenfield has something that other places don’t have,” he says. “We have a real park in this area, the only one with a really big open space. It’s going to be the city’s garden spot.”