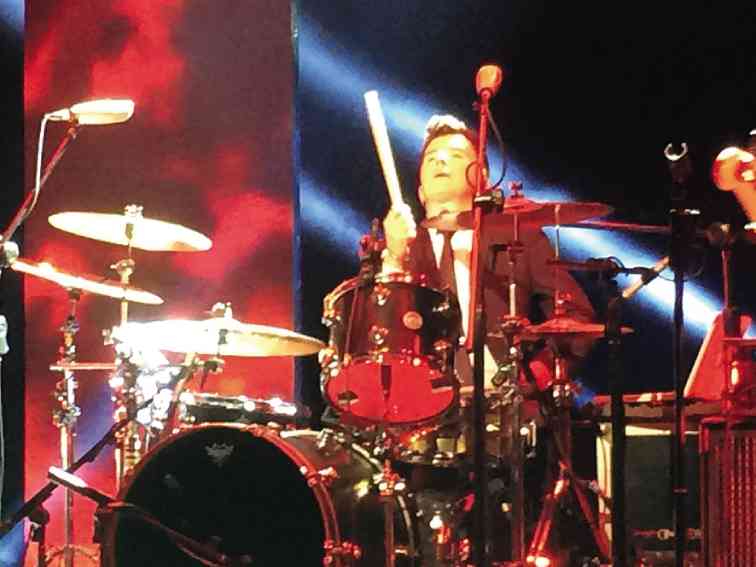 “SHOOK me all night long”: Rick Astley on drums

WATCHING a show in The Theatre at Solaire is such a pleasurable experience because its splendid design and facilities make us feel like we’re in Broadway or the West End. Its 1,760-seat capacity is also perfect for medium-sized concerts, such as Rick Astley’s recent gig.

Accompanied by a six-member band, Astley treated the full-house crowd to an eclectic mix of classic and contemporary pop, dance, soul, jazz and even hard rock numbers—solid evidence that the 49-year-old British singer-songwriter is not a has-been artist.

Astley was equally at home singing his biggest hits (“Together Forever,” “Strong, Strong Man,” “Hold Me In Your Arms,” “Cry For Help,” “Never Gonna Give You Up”) and a nice selection of covers (“Happy,” “Uptown Funk,” “Ain’t Too Proud To Beg,” “Get Lucky”).

He even got two Filipino singers in the audience, Martin Nievera and Carlo Orosa, to have some fun onstage.

Just when we thought it has been a wonderful night as the band’s faithful version of Chic’s “Everybody Dance” had the crowd on their feet, Astley went up the drum kit and proceeded to play AC/DC’s “Highway To Hell.” It was a brilliant way to relive his early days as a real drummer, even if his deep baritone vocals paled in comparison to Brian Johnson’s original hell-raising snarl.

Reuben Laurente, former member of top vocal group The CompanY and now a sought-after performer in international cruise ships, recently dropped in at Strumm’s to say hello to long-lost friends and jam along to a few songs onstage.

He sounded very good in a duet with Jeannie Tiongco on “Umagang Kay Ganda.” Tiongco enjoyed it so much that she told the audience, “Ang gara ng boses ni Reuben!”

In a chat with Inquirer Lifestyle a few days later, Laurente said that working in cruise liners can be challenging because it’s not your usual singing gig, although he has learned to cope with stress, depression, homesickness, among other things.

But the perks are truly rewarding, since he gets to travel the world and enjoy what he’s been doing since 2007—performing before an international audience and getting their nod of approval.

So far, he said he’s been to 68 countries in five continents.

Asked what his future plans are, Laurente said he wants to record all sorts of albums—about Christmas, jazz, gospel and something that pays tribute to traditional Filipino music.

But for now, he’s raring to accept more offers to perform as a headliner act in major cruise ships.

Manila is no longer the vibrant nightlife destination it once was in the 1980s—in fact it looks decadent with lots of hookers and pimps negotiating with foreigners outside karaoke joints.

But thankfully there remains a few establishments offering respite and comfort food—like Café Adriatico which still draws the kind of crowd you’ll feel comfortable with.

Recently we bumped into Inquirer Arts & Books editor Lito Zulueta seated by the door and engaged in a lively conversation with folks from the National Commission for Culture and the Arts.

The laid-back ambiance at the second floor is still an appropriate setting to drink San Miguel Pale Pilsen, though the bibingka our companion ordered lacked the softness and taste that helps remind us of the Christmas season.

But then on a different night, dining at Abe—part of the Larry J. Cruz (LJC) Group of restaurants like Café Adriatico—with dishes such as kare-kare, binukadkad na pla-pla, gising-gising and bamboo mountain rice giving us a superb taste of authentic Pinoy cuisine.