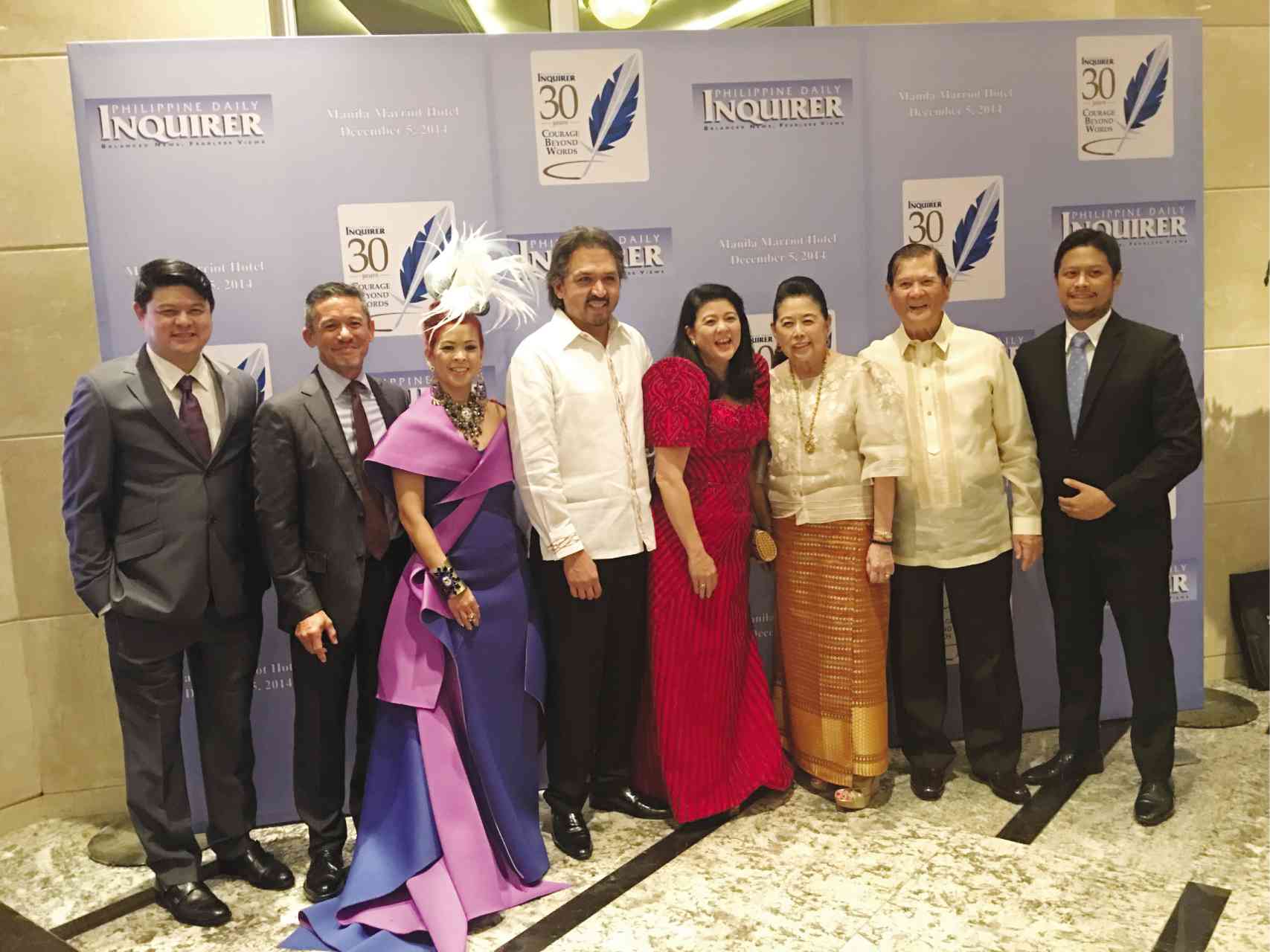 DECEMBER is just packed with Christmas merriment and multiple celebrations. This month, the Philippine Daily Inquirer celebrated 30 glorious years of bringing balanced news and fearless views to Filipinos here and all over the globe.

To commemorate the momentous occasion, Inquirer published a most personal coffee-table book, “The Inquirer Story: 30 Years of Shaping History.” In 312 pages of words and images, the book carries the Inquirer’s voice through the three decades.

Ruel de Vera, publisher and editor of the new book, included a timeline that runs from 1985 to 2015 showing the Inquirer history. The book also pays tribute to Inquirer founding chair Eugenia Apostol.

Sandy Romualdez, my sister and president of the paper, said the book was for the Inquirer readers who continued to be the inspiration for the organization to soldier on despite challenges in the industry. I noticed that I had two pictures in the book from when I first started this column over 10 years ago and another when I joined the New York Marathon with two other Inquirer members, Jun Engracia and Leica Carpo.

I owe all my marathon glory to my longtime coach Ani de Leon-Brown. She was recently named Best Coach in Asia by AsiaTRI.com. One of her current students, Claire Adorna, was named Best Up and Coming Female Triathlete in Asia.

Say it best with flowers and say it even better with preserved flowers from Te Amo Floristeria Manila. This specialty flower shop that recently opened at Active Fun Building (9th Ave. cor. 26th Street, BGC) arranges the most beautiful floral arrangements that last for years. A flower workshop on the second floor lets customers choose blooms that the Te Amo team will help arrange into a bouquet.

For our Red Charity Gala special ladies, Te Amo Floristeria owner Amy Peng gave specially made floral arrangements that matched the theme of the evening. Red Ecuadorian roses were also given to guests at the launch of the new Nescafe Red Mug Machine.

The convenient and easy-to-use Nescafe Red Mug Machine lets you create a wide range of delicious and pretty cups of coffee. Developed in Switzerland by Nestle coffee machine experts, the compact unit boasts a coffee chamber with a unique cyclone that brings out the Nescafe Classic aroma and flavor.

It also has a foaming jet technology that creates foam with ease, inspired by the barista steam jets you see in local coffee shops. In around two minutes, the Nescafe Red Mug Machine lets you have a foamy cappuccino, layered latte, fancy mocha and other delicious coffee creations with Nescafe Classic and Nestle Coffee-Mate.

At the Nestle party, I had my friends make exciting coffee recipes as they tagged #StartCreating and posted their pics on Instagram. My Christmas Cinnamon Cappuccino was a hit among the ladies.

The Nescafe Red Mug Machine is available in select SM, Robinsons, Landmark, Puregold and Merkado Supermarket branches in Metro Manila at a special introductory price of P1,999 until Dec. 31 only. This special package will come with a transparent glass mug, 100 grams of Nescafe Classic and 250 grams of Nestle Coffee-Mate. Check it out at www.nescafe.com/ph.

The International Premier Tennis League, or IPTL, is the biggest tennis tournament in the country, bringing in the world’s best tennis players. The second season of the IPTL followed last year’s success with 30,000 fans interacting with tennis players such as Maria Sharapova and Andy Murray. Powering the second year of the IPTL Manila leg were PLDT Home and Smart. Supporting this year’s event were Tourism Promotions Board Philippines, Air21, Babolat, Manila Polo Club, BDO, SMDC, Visa, Fox Sports, Citibank, AG88.com. The official residence of the IPTL in Manila was the City of Dreams and Nobu Hotel. Jaguar Land Rover was IPTL Manila’s official luxury ride. SM Tickets was the official ticketing arm.

The three-day IPTL had more fan engagement during the event, such as the noise-o-meter, social media contests, and audience participation. Playing teams and players have increased with 30 international players divided into five teams: The Philippine Mavericks, Indian Aces, Singapore Slammers, UAE Royals and, the newest addition to the roster, the Japan Warriors. Team matches were divided into five: men’s singles, women’s singles, mixed doubles, men’s doubles and men’s legends singles. It was a great add-on to all the December festivities.