John Arcilla aka Heneral Luna: I am a Filipino first, an actor second | Lifestyle.INQ ❮ ❯ 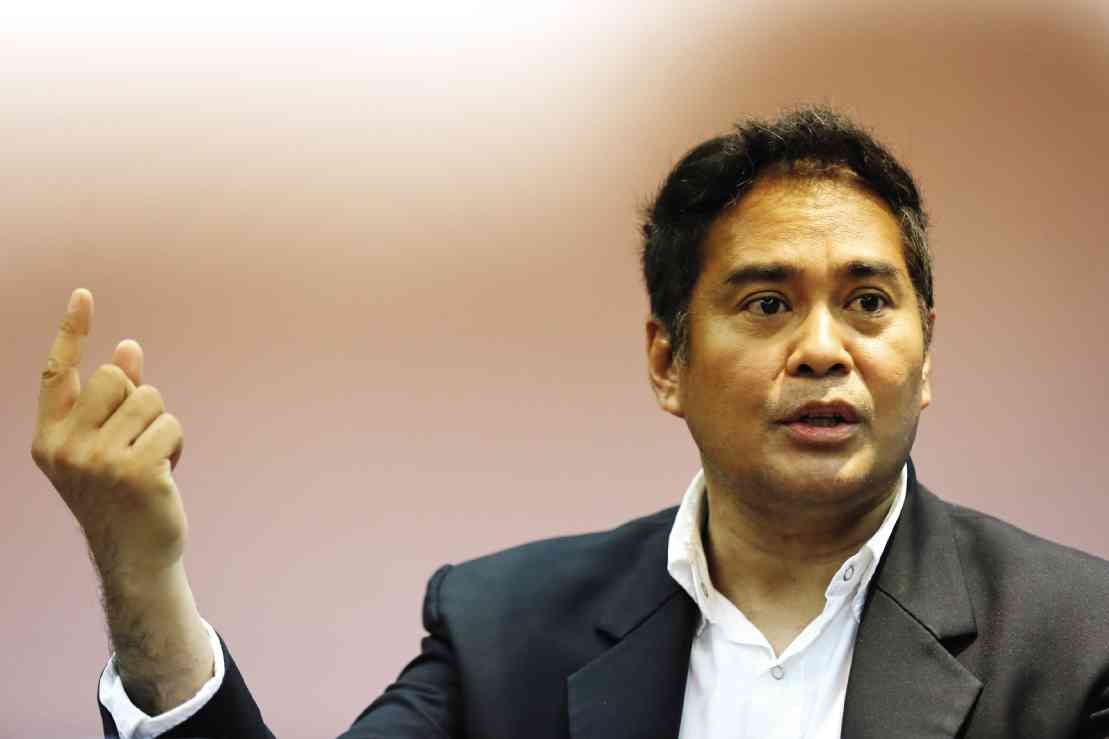 John Arcilla aka Heneral Luna: I am a Filipino first, an actor second

THEATER stalwart John Arcilla has skyrocketed from semi-obscurity to, at the very least, semi-fame, thanks to the left-field success of the historical biopic “Heneral Luna.”

His feral performance as the hot-blooded revolutionary hero Antonio Luna has made him a recognizable public figure, specially when he goes out wearing Luna’s trademark handlebar moustache and military uniform on speaking engagements.

“Gusto nilang murahin ko ang mga barumbadong opisyales ng gobyerno,” says a bemused Arcilla, who’s happy to oblige his adoring public. Luna has become a touchstone of sorts for society’s discontents—from government corruption to the incompetence of public officials. And for many Filipinos, it seems, Arcilla is Luna.

In fact, he’ll be reprising the role in the coming Gregorio del Pilar biopic. Far from rebelling at being so typecast, Arcilla hopes to sustain the momentum of nationalist sentiment following the success of “Heneral Luna.” The best part about being famous, he says, is that it gives him a platform for expressing his thoughts and opinions on social and political issues.

Arcilla, who turns 50 next year, spent his formative years in Baler, Aurora, where his parents took refuge during the martial law years. At age 7, he began to show an interest in the stage, and joined the Philippine Educational Theater Association (Peta) while still in high school. He earned a degree in Mass Communication from St. Joseph’s College of Quezon City, and was a scholar of the Actors’ Workshop Foundation under Laurice Guillen and Leo Martinez.

It was with Tanghalang Pilipino, the resident theater company of the Cultural Center of the Philippines, that he got his stage legs, eventually graduating to lead roles. Since then he’s gone from strength to strength, expanding his range to include roles in film and television.

In 2012, he bagged a small part in the big-budget Hollywood thriller “The Bourne Legacy.” The following year he starred in “Metro Manila,” a British independent film which was entered in the 86th Academy Awards and earned Arcilla a best supporting actor nomination in the British Independent Film Awards.

Before all that, however, he was an activist, going to the barrios to teach children of peasants and laborers as a “cultural worker.” He broke with the orthodox Left when it opted out of People Power in 1986. Since then he has chosen to follow his own path toward social and political change.

Outside the stage and screen, Arcilla runs an environmental non governmental association called Care and Protect Life on Earth that he started in 2003. He also put up a community animal shelter called Stray Home, an outlet for his love for animals. (Arcilla shares his home with nine poodles, a Belgian Malinois and a Siberian Husky, and has an almost psychic connection with his pets.)

Though Arcilla’s current success has been decades in the making, there’s no denying that “Heneral Luna” has been a career breakthrough. Hopefully, the convergence of Arcilla’s art and his activism can continue in the future.

Has “Heneral Luna” changed you?

Yes. My dad was active sa labor unions during the ’70s. I think ’yan ’yung reason kung bakit we had to transfer from Manila to my mom’s place in Baler, Aurora, kasi labor leader siya.

You started in theater and then you did movies, television, nagkaroon ka ng hit commercial, ’yung “Coffee na lang, dear.” You’ve been in the industry for so long pero it’s with “Heneral Luna” na parang you’re suddenly the actor of the year. Have you come to terms with that, have you wrapped your head around that idea? Mas busy ka na ba? Tumaas na ba ang talent fee mo? You don’t have a manager to do that for you?

Would you say you need to have a manager at this point?

What’s been the craziest response you’ve received form ordinary people or fans when you go out in public?

Do people easily recognize you without the moustache?

Do you enjoy the attention?

But when you watch it?

But according to Ambeth Ocampo, that was even milder, the death scene?

Yeah. It was downplayed. The real account was, the arm was already dangling and the intestines were all coming out. 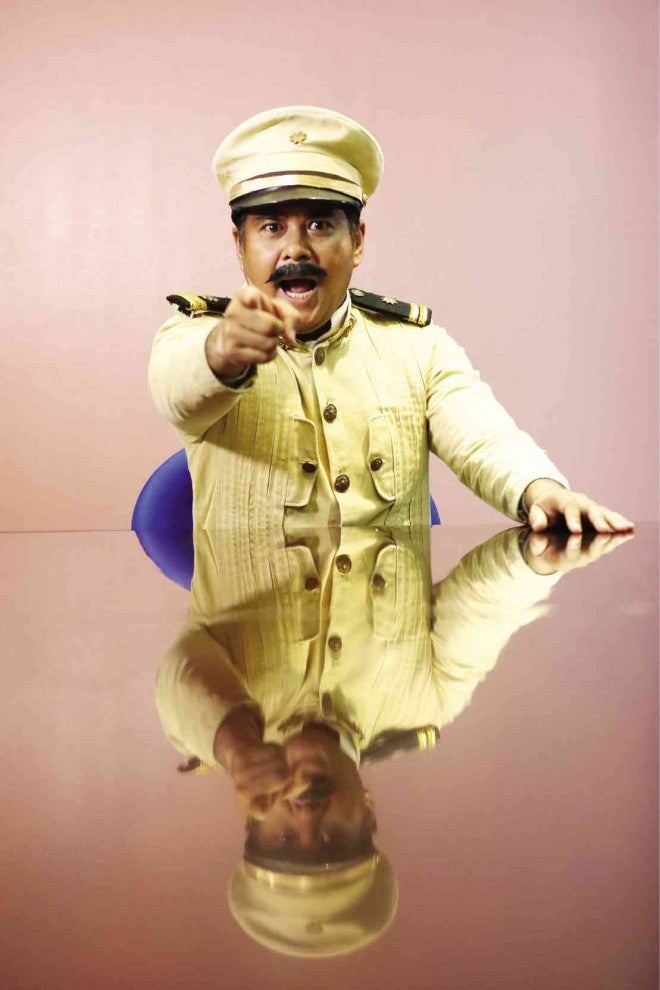 Where do you think you would go from “Heneral Luna,” at least role-wise?

Now that you’re getting offered all these things, what do you say no to now? How do you choose your roles? May mga tinanggihan ka na ba lately?

I was the first Asian to get nominated for best supporting actor in Great Britain in the film category [for “Metro Manila”]. Si Lea Salonga sa theater. Pero na-confirm or na-affirm? Hindi ko kasi tinitingnan na ganon e. I’m just doing my job. So na-affirm siguro sa sarili ko na I’m doing my job. Kung i-appreciate man siya o hindi, pareho pa rin sa akin kasi I have to do my work well, whether it gets appreciated or not.

Yes. I started as a singer when I was a kid, and then I was a singing actor at the Cultural Center of the Philippines through Ryan Cayabyab. I was one of the pioneers of Tanghalang Pilipino Actors’ Company, with Tata Nanding Josef, Shamaine and Nonie Buencamino—under Nonon Padilla. I was there from 1990 to 1997, seven years.

What do you recall of those early years?

They were one of the best stages of my career as an actor. We’d be doing a play now, then rehearsing for another play while having a script analysis for another play; so you’re working on three scripts at the same time. Ang laking factor sa training ko as an actor. At the same time, I was doing movement exercises, voice exercises, musicals, straight plays, script analysis, character analysis, so hindi siya acting-actingan lang, it was a rigid training for actors. I must say that Nonon Padilla is my mentor. Well, my first mentor was Tony Mabesa, but ang father ko talaga sa pag-develop nung aking knowledge sa theater is Nonon Padilla.

Have you been to a bookstore lately? Because one of the best sellers in the bookstore is this Ambeth Ocampo book. Did you ever imagine you would be on the cover of a best-selling book?

That movie also brought to the fore how our heroes turned against each other, and betrayed each other. What did you think of that? Other than that kind of personal past, who is John Arcilla as a person? Huwag na philosophical. (Laughter)

How long has the program been going on?

I started it in 2003, but it was SEC-registered [Securities and Exchange Commission] in 2008, and it is also recognized by the DSWD [Department of Social Welfare and Development] now. I’m with a group of teachers, volunteers, my staff.

What are your other interests?

How many dogs do you have?

Do you name your dogs yourself?

Yeah. (Laughter) But, remember, when I was with Tanghalang Pilipino, gumagawa na ko ng mga musicals, and ang mga estudyante noon would be really screaming and cheering for us. So kumbaga, this is not really something new. I did that for seven years, and these students were shouting for us every time we came out to bow. So, ngayon, pag may ganoon, naiintindihan ko. Bakit? Kasi kasi Nagustuhan nila ang “Heneral Luna.”

So it’s true, the world’s a stage?