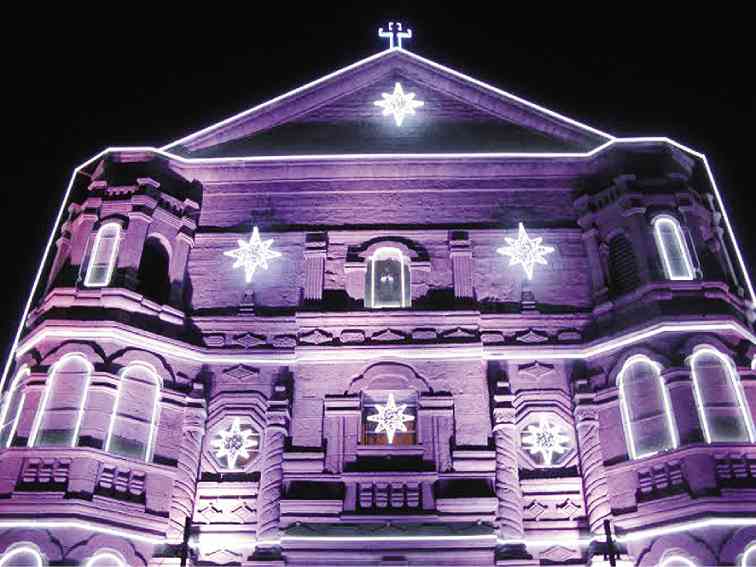 NOW LINED with a brilliant blue incandescence, Our Lady of Remedies Parish (also known as Malate Church) commands attention from afar come nighttime, its newly restored façade made even more distinct, thanks to the Christmas lights that now outline the centuries-old structure’s front.

The lighting of Malate Church’s façade last Dec. 2 more than ushered in the Christmas season—the first Sunday of Advent had just passed then; it, too, marked the end of the first phase of the historical structure’s restoration program, the 5-5-5 March of the Thousands.

Also part of the culmination of the restoration program’s first phase was the presentation of the project brief to Malate Church by its restoration and conservation partner, Escuela Taller de Filipinas Foundation Inc.

And with this conclusion came the beginning of the restoration project’s second phase, which aims to cover issues that were not addressed within the first phase’s five-year time frame.

“There are still a lot of things to be done, but we keep moving forward,” said Malate Church parish priest Fr. Leo Distor.

Distor explained that this time around, Escuela Taller would focus on the conservation and repair of the church’s interior and its perimeter, which includes the structure’s fences, parking lot and other open grounds.

The second phase also meant another battery of consultations with the Malate community, the local government, conservation experts and other stakeholders.

“Doing restoration work is not cheap, but it is cheaper in the long run because of how long it will last,” said heritage-preservation expert and Escuela Taller chair Jaime Laya during the presentation of the project brief.

According to Escuela Taller, the challenge it faced during the first phase was striking a balance between maintaining the old church’s original look-which community members and stakeholders wanted to keep and updating it with modern features that would help fortify the structure.

Aside from corrosion and disaggregation in the adobe walls (there was visual evidence that parts of the church was suffering from corrosion as early as the 1930s), the conservation group also discovered that some of the partitions were plastered using cement, which only hastened the structure’s deterioration through the years.

Escuela Taller also found out that certain stones—perhaps from previous restorative efforts—were installed with no locking devices, rendering the building unstable and, if left unnoticed for long, becoming a safety hazard.

Palitada or lime plaster, of course, was also applied to the adobe to further protect the material from damage brought about by outside elements, Bulaong added.

While some features were added to strengthen the church, part of it—the choir loft—was temporarily removed. Escuela Taller is looking into reinstating a better and more structurally sound choir loft once the design is finalized.

In fact, the main door seen at the church’s façade isn’t the real deal—it’s only a temporary replacement that artfully mimics the original.

Stained windows, along with their frames and iron grills, were also replaced and repainted.

Vents, too, were added to improve thermal comfort inside the Malate Church. Complementing this eco-friendly passive cooling method is the use of sustainable energy for certain parts of the structure. Solar panels, which now provide power for the church’s interior lights and the Remedios Jubilee Mission Center, were installed on one side of the roof.

According to Bulaong, the church doors, which were ridden with pests and were severely damaged, had to be disassembled, fumigated and repaired with the same wood species. Paraffin wax was also applied to these doors as a sealant.

And to further strengthen the already-treated doors, pivot hinges were fabricated and installed by Escuela Taller workers, who are poor Filipino youth taken in and trained by the conservation group.

For the priests of Malate Church, this is how they go beyond the physical repair of the parish buildings and grounds.